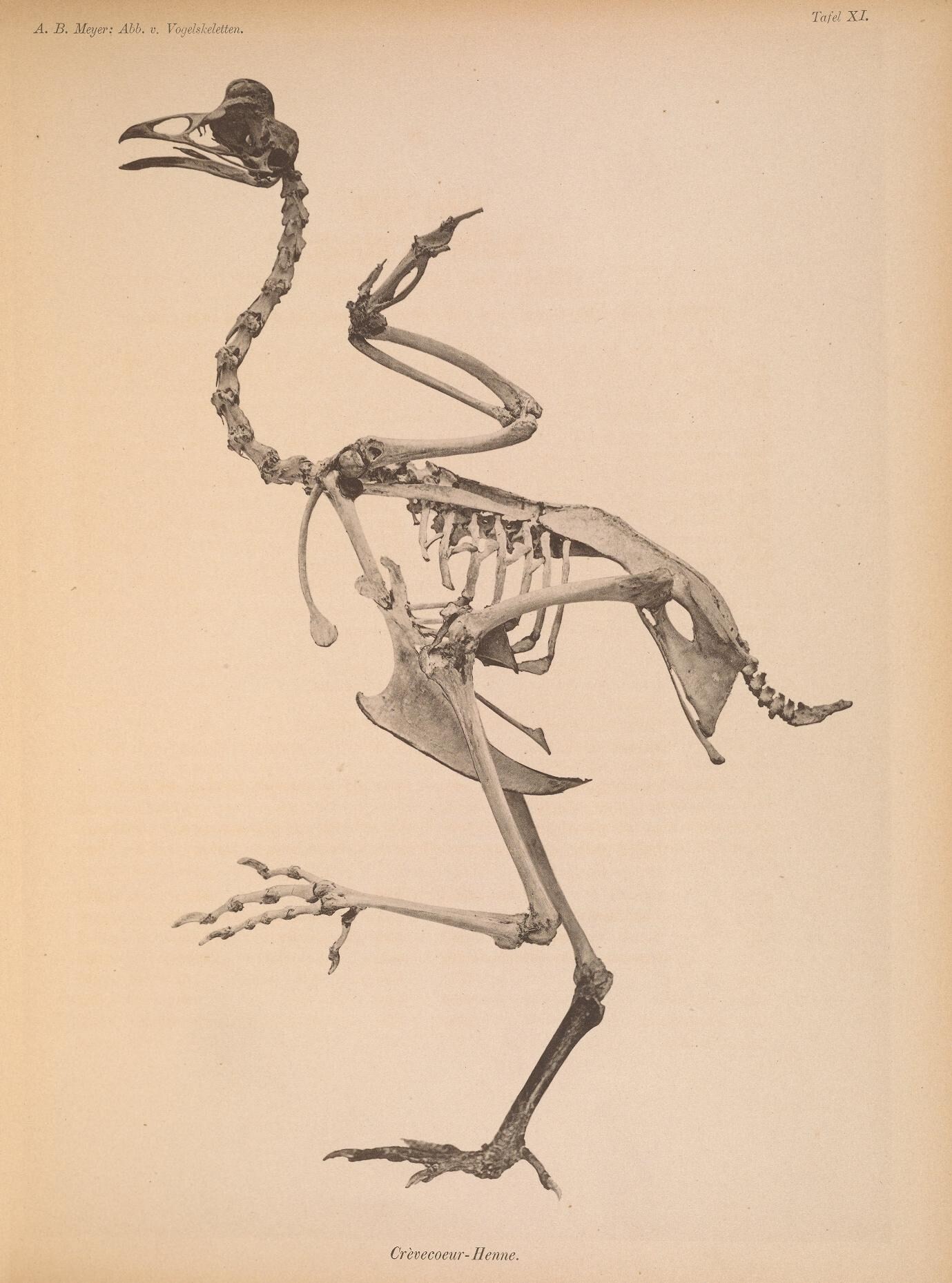 The external anatomy of the chicken is well known. There are gender differences with males being generally larger with more extravagant tail feathers, larger comb and wattle and spurs. Differences in rudimentary comb size between the sexes can be seen at a few weeks of age.

As birds mature the comb and wattles enlarge and sexual maturity in the hen is accompanied by reddening of the comb.

Chickens should be handled correctly. They must be restrained gently by holding both wings close to the body of the chicken and lifting the body. The bird can then be held comfortably tucked next to the body.

If live birds are held upside-down for examination they may vomit – gently emptying the contents of their crop. The skin in birds is remarkably thin and somewhat fragile so that it can tear relatively easily. Very little fat is generally present sub-dermally although fat may be seen around the internal organs.

There is a combined intestinal and sexual opening, the vent, which is the external part of the cloaca, situated under the tail. Intestinal and feed problems can sometimes be identified by wet feathers or caked faeces around the vent.

The most important organ systems in the chicken are the alimentary and reproductive tracts. The trachea, lungs and heart are not remarkably different from other animal species.

A knowledge of the internal anatomy of the bird can improve understanding of the infectious and non-infectious ailments to which the birds may be subjected from time to time. 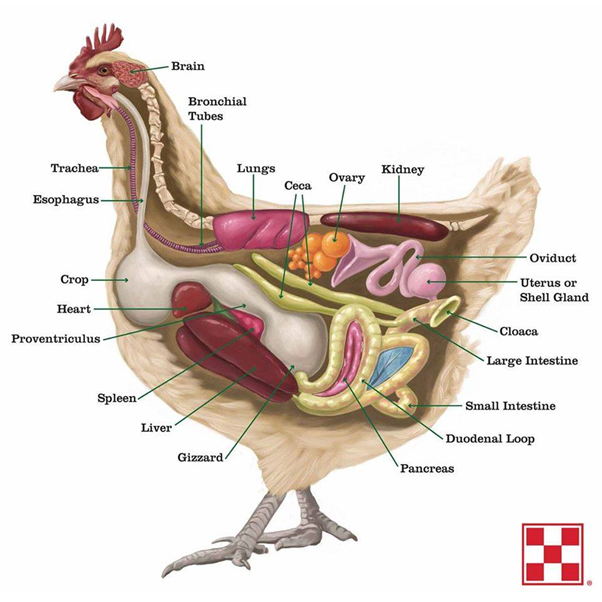 The following diagram shows the various parts of the alimentary tract which is adapted to the omnivorous nature of chickens. 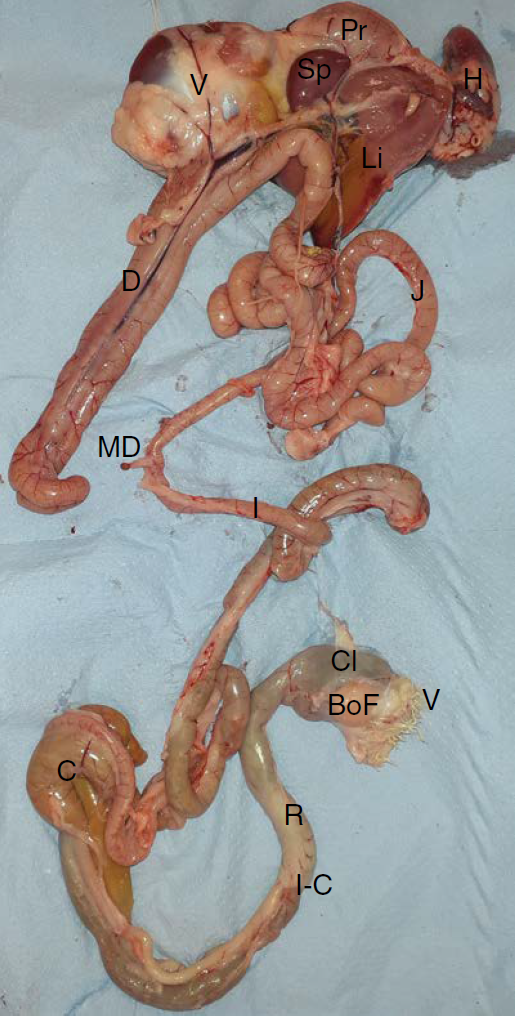 Food is ingested whole and passes into the crop, an organ in the neck where grain and other food is stored and where a lactate fermentation occurs so that if opened post-mortem it may naturally have a sour smell.

Grit is also consumed which assists in maceration of grain and other large food particles. Completely carnivorous birds have no crop (and only very rudimentary caeca – see below).

Macerated food passes into the proventriculus – where acid is produced – leading to a pH of 1-2 which assists in peptic digestion. It also reduces the microbial load entering the small intestine. The proventriculus leads directly into the muscular gizzard, where maceration is completed and enzymic digestion takes place.

The gizzard is sited below the diaphragm and adjacent to the large liver (not shown in the above diagram). Behind this is situated the greenish gall bladder, which produces bile for digestion of fats, and the spherical spleen.

The pancreas is situated between the first loop of the small intestine. The three sections of the small intestine – duodenum, jejunum and ileum – lead to the ileo-caecal junction. In addition to Meckel’s diverticulum there is another immune organ present, a small circular Peyer’s patch, which can sometimes be seen through the body wall some 2/3 way down the intestine.

From the ileo-caecal junction arise the two large caeca where the bacterial count is highest and micro-organisms like Salmonella and Campylobacter colonise preferentially. The consistency of the caecal contents varies quite normally. In very young birds it can be quite liquid and olive-green coloured.

In older birds the contents can be liquid but more frequently the consistency resembles toothpaste and is brown in colour with a strong foul smell. The caeca are emptied between 2-4 times a day, and the caecal droppings are very different in appearance to normal faeces. Faeces are solid and frequently shows the presence of white urates whereas caecal drops are brown and sticky.

At the very base of the caeca at the ileo-caecal junction are two small nodular lymphoid organs called the caecal tonsils. Where the rectum empties into the cloaca is another lymphoid organ, the bursa of Fabricius, the site of B cell maturation.

Meckel’s diverticulum is a remnant of the yolk sac which at the time of hatching is large, has not been absorbed completely and provides food for the chick for the first few days of life.

At post-mortem abdominal air sacs, looking like small misshapen balloons, can be seen tucked between the various organs. Air sacs are also present in the thorax and bones and serve to lighten the weight of the bird facilitating flight.

Unlike most mammals, birds have a single oviduct (see diagram below). The functional anatomy is essentially the same as in mammals with release of ovules from the single ovary in mature females into the oviduct where they are fertilised.

The oviduct leads down to the cloaca and may an egg at various stages of development. The albumen is deposited around the yolk in the magnum. The shell is deposited in the uterus (shell gland). 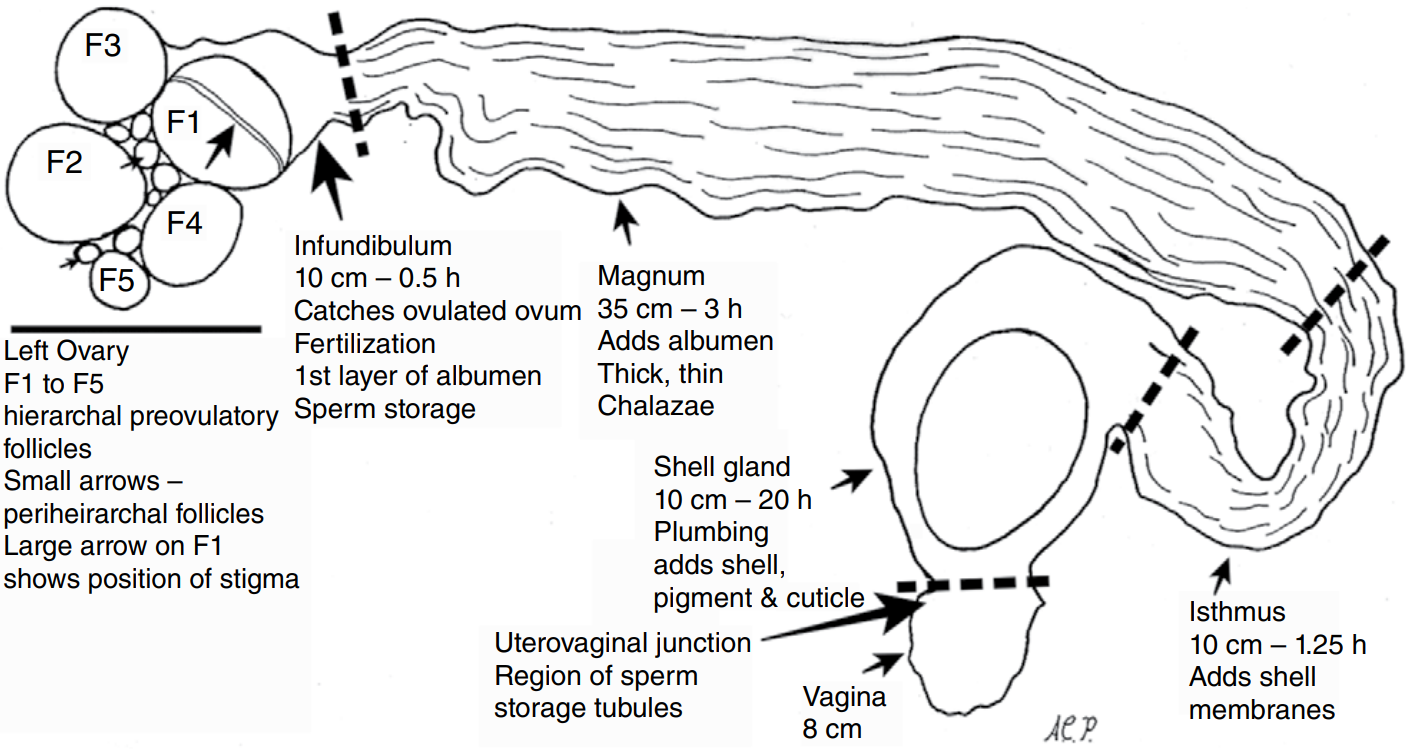 The testes in the male are much smaller but situated at the top of the kidneys.

Mating is not a prolonged affair attained by “cloacal kissing” and discharge of semen into the cloaca.

Clearly, post mortem examination can inform on diagnosis. Lesions in the liver, such as those produced by Histomonas, can be of diagnostic significance. However, pericarditis and polyserositis, where fibrinous deposits may be present covering a variety of organs, are generally not pathognomonic.

Although the general anatomy of all livestock species is similar, the presence of crop and gizzard and two caeca in the alimentary tract, one oviduct and the production of large ovules is typical of birds.

Careful dissection, performed aseptically where possible, is important. Similarly, contamination from feathers should be avoided when taking samples for analysis.

Ideally, the outside of the carcass – including the plumage -should be sprayed with alcohol prior to opening the abdomen.

If several samples are to be taken, they should be removed in reverse order of likely levels of contamination. Samples from the intestine should be taken last.