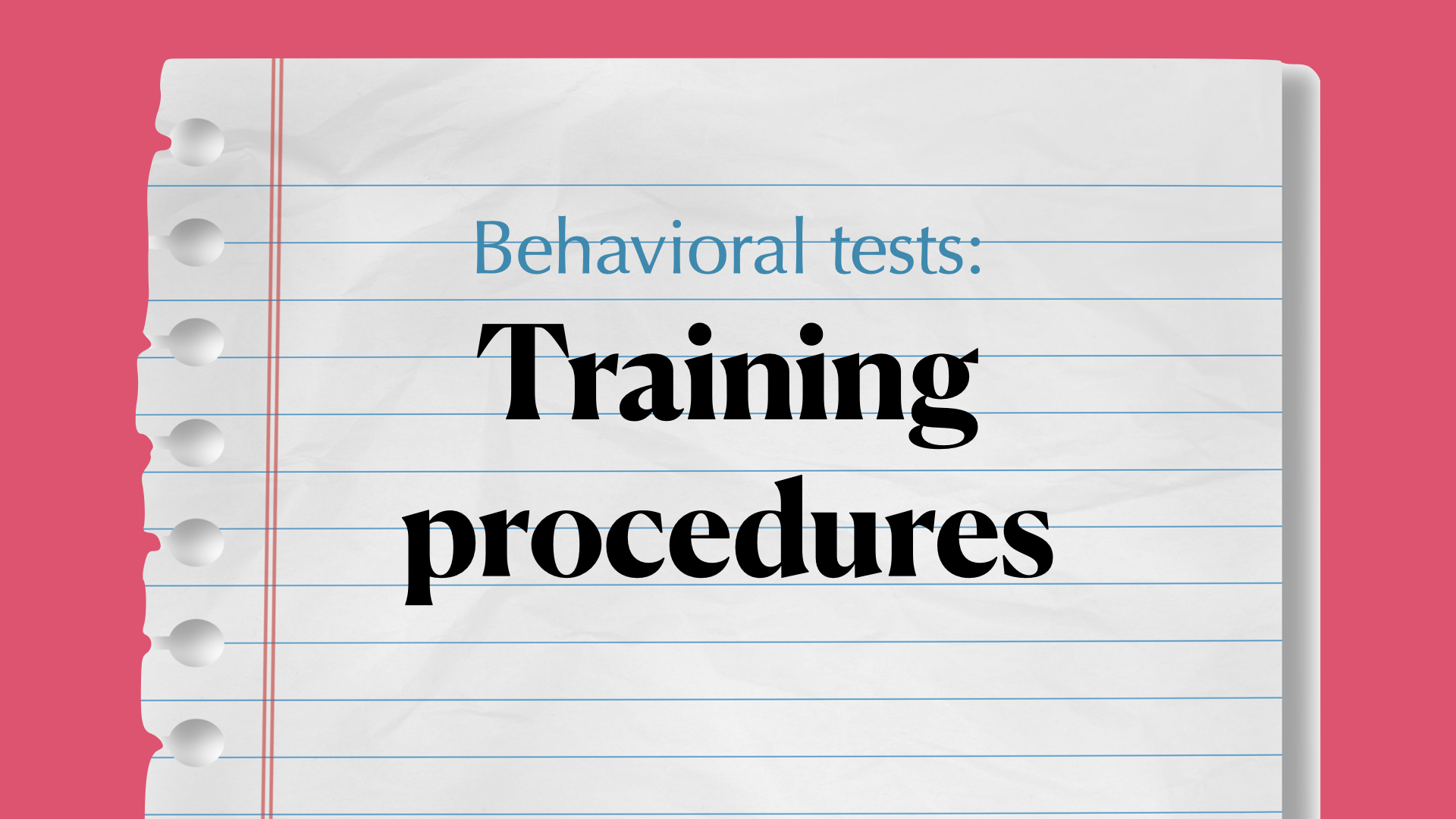 Now that we’ve covered the first category of behavioural tests, let’s move on to the second: training procedures.

In training procedures, subjects are taught an explicit rule to see whether they have the cognitive ability to support it.

In this case, subjects—or animals are required to learn a perceptual or cognitive rule.

For instance, select a triangle instead of a circle in order to receive a reward. Through this procedure, the two geometrical figures (which in this example, are referred to as the neutral stimuli) are associated with a reward, which could either be food or something social.

However, for the animals, at the beginning, it isn’t clear that they have to select one stimulus presented on a monitor to reach a reward, because this is not a behaviour that they commonly use in natural contexts.
Hence, the procedure requires several steps before the subject begins the task. The subjects must first undergo a shaping procedure to learn the association of a reward with the correct response. For example, horses will receive a food reward: first, if they just stay in the half of the room associated with the monitor and then another if they touch any part of the monitor.
So we gradually shape the behaviour of subjects in the experimental room. Only after this can we reinforce one stimulus, where we provide a reward (generally food) if they select one stimulus (called the positive stimulus) over the other (or the negative stimulus).

At the beginning, the animals are usually confused and only choose randomly. However, if they have the cognitive skill under investigation, trial after trial, they are expected to successfully discriminate between the stimuli.

When we try to teach a rule, it is fundamental to ensure that the rule we are looking at is the only one that permits the discrimination between two stimuli.

If not, the possibility exists that the animals reach the learning criterion but not because of the rule you want to teach them! To avoid this, presenting multiple stimulus pairs can help a lot. For example, if I want to see whether pigeons have a concept of ‘triangle’, I might set up a training study in which I always present a triangle versus a circle and I provide food reward only when pigeons select the triangle, like when they peck at the triangle.
Let’s suppose that the subjects select what we call a triangle at least 85 percent of the time. Well done, isn’t it? But why did I say “what we call a triangle” instead of just simply saying “triangle”? Because, frankly, this task could be solved by using different rules in which the concept of a triangle isn’t actually necessary.
Let me demonstrate what this means through some examples of rules:

Rule Number 1: Select the blob with a smaller area.

Indeed, the area of the triangle is smaller than that of a circle. This does not involve any concept of triangle at all.

Even without having a specific concept of triangle, the animal might select what we call a triangle because the figure presents something different compared to the circles, the angles. Maybe the pigeons did not even notice there are three angles, but their internal discriminative rule could be: “as soon as I find a shape like this (angle), I stop my search and peck this stimulus”.

The positive stimulus may vary in shape (although it will always be a triangle), orientation, and area, so that the animal cannot use what we call a pattern recognition, like a picture of the single stimulus. Instead it has to extract a rule from all these positive stimuli, such as ‘it’s the figure that always has three angles’.

Similarly, the negative stimuli could be different types of circles, but also other figures, especially with angles, so that the previous rule “select the figure that presents an angle” is no longer enough to find the stimulus associated with food. 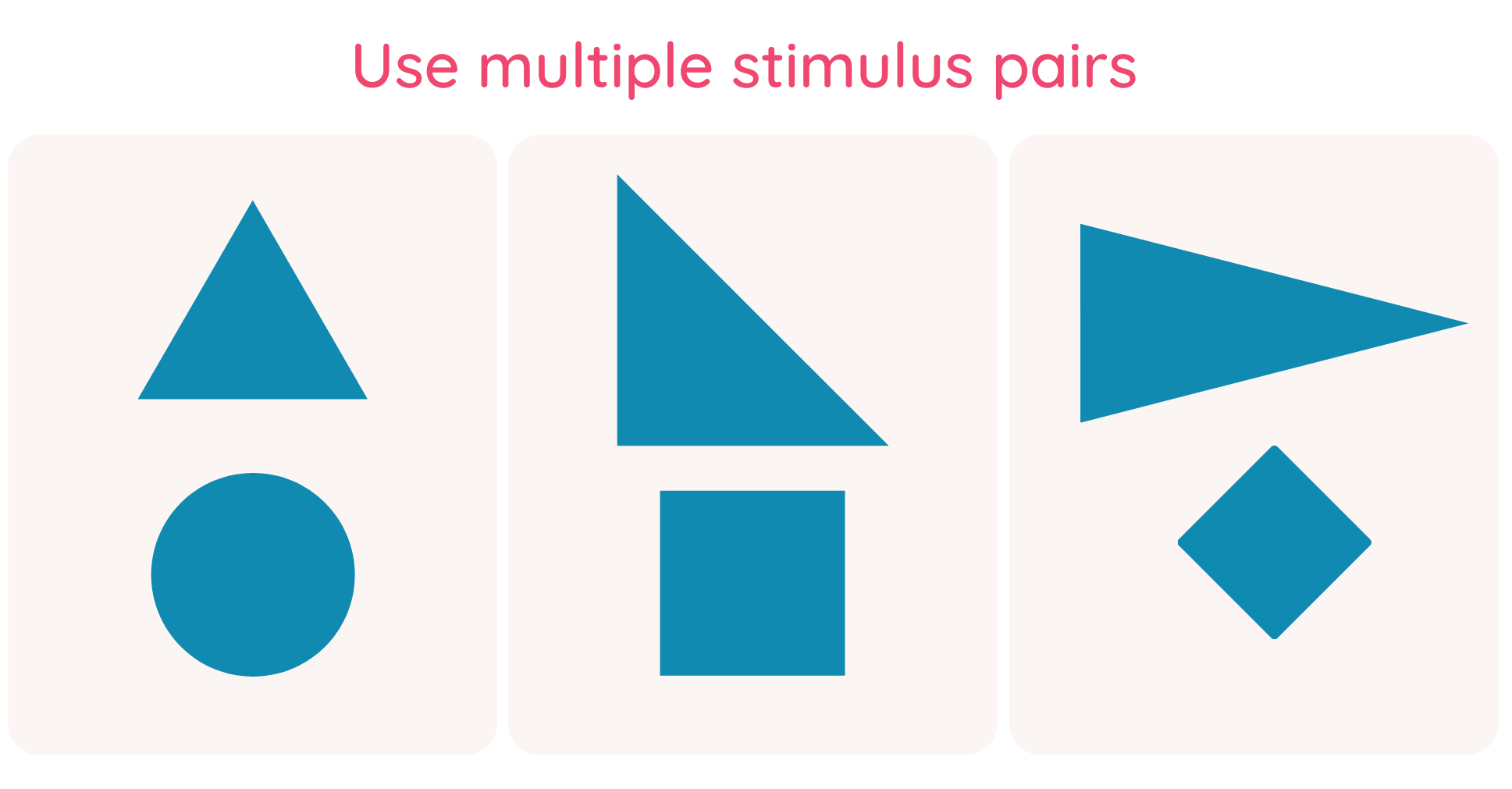 Avoiding pattern recognition through the use of multiple stimulus pairs

So as a general rule of thumb, use multiple stimulus pairs: Your first pair is always a triangle vs. something else. And then the second is always a different triangle vs. a different figure on the other side. The only way to solve this task and eat the reward is by learning the rule “select the triangle”.

When you think about training studies, you always think about a food reward, and indeed this is the most common type of reward for mammals and birds.

But cold-blooded species are not similarly motivated to reach food often during the day therefore, this type of reward may be less effective compared to mammals and birds. In this case, a different type of reward is needed. If the species is highly social, for instance, the possibility to reach social companions is a powerful reward. You’ll find out more about this when we talk about guppies.

In summary, in training procedures, an animal is required to learn a rule. This generally requires the presentation of several dozens of stimuli in which there is a positive and negative stimulus. Most of these studies use food as a reward, but in some cases, a social reward has also been used.