Three key areas of neonatal care that must be properly managed to reduce the risk of ROP in preterm infants. 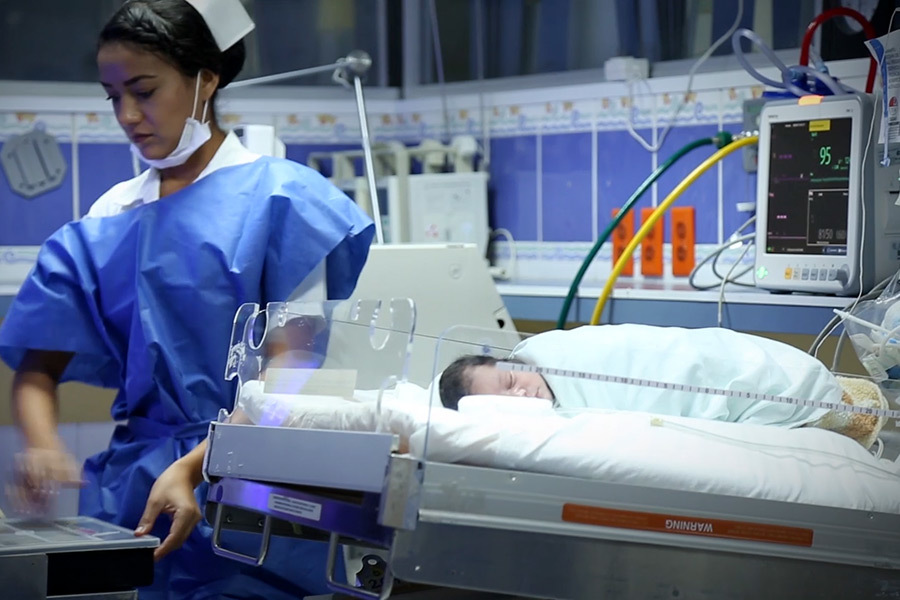 Routine implementation of standard interventions from the moment of birth improves outcomes and prevents retinopathy of prematurity (ROP) in premature babies.

In this article, we consider in more detail three crucial areas of neonatal care: oxygen management, nutrition and infection control. 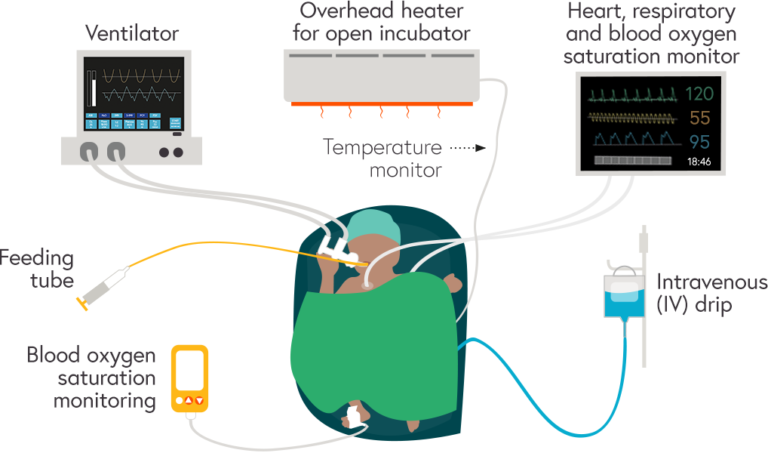 Key equipment and monitors to manage oxygen, nutrition and infection control for a preterm baby in the neonatal intensive care unit (NICU)

Premature babies often require resuscitation at birth and the use of supplemental oxygen in their care dates back to the 1940s. Since then we have learned that oxygen can have both beneficial and harmful effects. Not giving enough oxygen to premature babies in need increases their risk of morbidity and mortality but giving them too much oxygen can damage their tissues and increase their risk of ROP.

It is extremely important that the use of supplemental oxygen for preterm babies is carefully monitored and guided by protocols at all times from immediately after birth in the delivery room, during the first golden hour and later in the neonatal unit.

A person’s blood oxygen saturation (SpO2) is the proportion of haemoglobin in arterial blood that is saturated with oxygen. SpO2 is measured using a pulse oximeter on the wrist or foot. By adjusting the amount of oxygen or respiratory support provided to a baby, the desired SpO2 can be achieved and maintained.

In the uterus the foetus is in a relatively low oxygen environment with a SpO2 of around 50 – 70%. However, at birth, a major adaptation takes place with the first breathing movement and this results in changes in the respiratory and cardiovascular systems.

It is important that the SpO2 of preterm infants is monitored to ensure it gradually rises from 60% to 90% between 1 and 10 minutes after birth.

Infants born at less than 32 weeks’ gestation should attain a SpO2 of 80% or more AND a heart rate of more than 100 beats per minute by 5 minutes of age.

The adjustment of the concentration of oxygen levels should be by 10% (FiO2 = 0.1) per 30 seconds and must be guided by oxygen saturation levels reached.

Download a printable version of this table as a (PDF)

The proportion of oxygen in a mixture of oxygen and air that is inhaled is called the ‘fraction of inspired oxygen’ (FiO2). FiO2 can be adjusted, both up and down, using pulse oximetry guidance. In settings where air and oxygen blenders are not available and 100% oxygen is used (FiO2 = 1.0), it is important to reduce the oxygen concentration as soon as possible to avoid the risk of developing severe ROP. 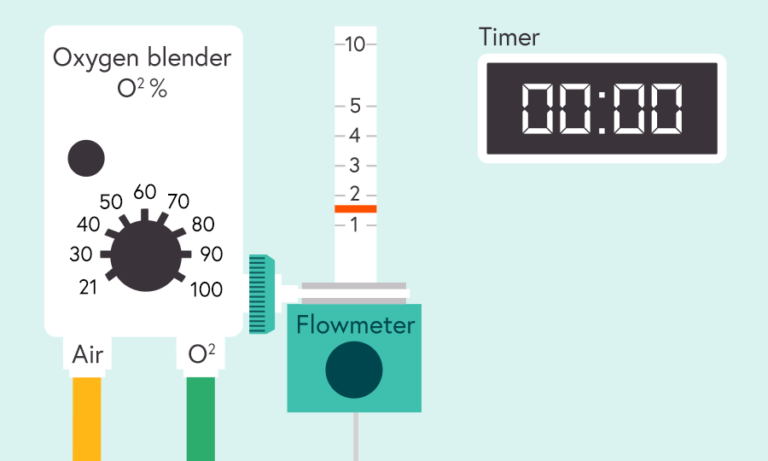 The ideal SpO2 targets for preterm infants born at different gestational ages are not fully known. The European Consensus Guidelines (Sweet et al. 2019) recommend SpO2 target ranges of 90 – 94% in preterm infants. Although this recommendation is applicable in high-resource settings with well-established ROP screening and treatment services, the same might not be true in lower resource settings. In these settings, the WHO (2015) recommends SpO2 targets of 88 – 95%. As the evidence continues to develop these guidelines may change.

In summary, in all settings, NICUs should:

Use of caffeine to reduce the risk of severe ROP

Apnoea (intermittent cessation of breathing) of prematurity is a common finding in infants born before 34 weeks of pregnancy. Administration of methylxanthines – aminophylline, theophylline and caffeine – has been shown to be effective in reducing the frequency of apnoea in preterm infants and has been used for several decades. The Caffeine for Apnoea of Prematurity (CAP) trial examined short- and medium-term outcomes in infants with birth weights 500 – 1250 g randomised to caffeine citrate or placebo until therapy for apnoea of prematurity was not required. The results of the trial showed a lower rate of severe ROP (and bronchopulmonary dysplasia) in infants exposed to caffeine.

Caffeine citrate is cheap, doesn’t require cold storage, and can be administered orally or intravenously (the solution for injection can also be used orally). A loading dose of 20 mg/kg is followed by once daily maintenance doses of 5-10 mg/kg. Caffeine should be administered as soon as possible after birth even if the infant needs respiratory support and has not had episodes of apnoea of prematurity, and should be continued until the preterm infant reaches approximately 34 weeks postmenstrual age.

The association between poor postnatal growth in preterm infants and the development of severe ROP has been demonstrated in several observational studies. A population-based study of infants born at less than 27 weeks’ gestation in Sweden, demonstrated that lower intakes of energy were associated with a higher risk of severe ROP (Klevebro 2019).

Enteral nutrition, preferably with mother’s breast milk, should be started as soon as possible. Breast milk has many advantages over artificial formulas and observational data suggest that it might lower the risk of severe ROP. The mother should be encouraged and supported to express her milk which can be stored in a fridge for 24 hours and in a freezer for much longer (Ellsbury et al. 2015).

Factors that contribute to poor postnatal growth include inadequate nutritional intake and increased nutritional demand. Nutrition for the preterm infant should start as soon as possible after birth. Current European guidelines strongly recommend an energy intake of 110 – 135 kilocalories per kilogramme per day. With decreasing gestational age at birth it is more likely that parenteral nutrition will be required, and this must contain enough energy (calories) from fats and carbohydrates to promote growth and prevent catabolism (the breakdown of molecules in a body’s cells to release energy). 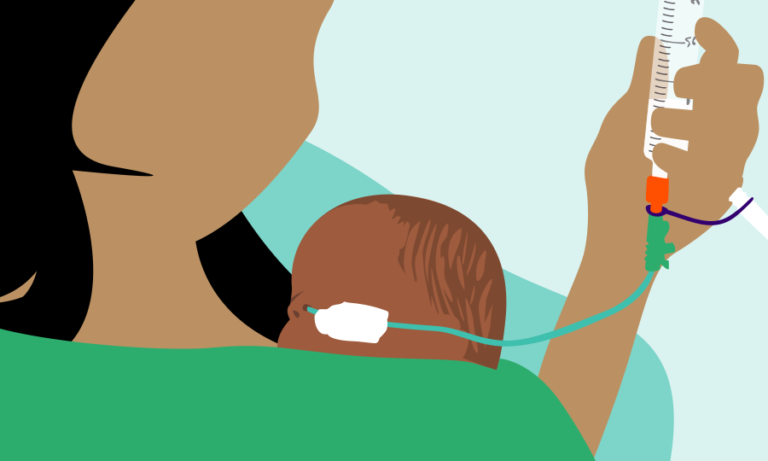 Preterm infants are at increased risk of developing sepsis, a severe infection which spreads through the blood. Immature defense systems, exposure to pathogens before, during and after birth, poor hand hygiene practices by staff and inadequate aseptic techniques during invasive procedures (such as blood sampling and insertion of lines into blood vessels) all put the preterm baby at risk of sepsis. It is an important cause of mortality, and is associated with adverse outcomes including severe ROP.

Prevention of sepsis is a key component of high-quality care for the preterm infant. Key care practices to reduce the risk of early onset sepsis (< 48 – 72 hours of age) include:

In some cultural traditions, the application of herbal poultices, ash or human milk on the umbilical cord stump can be a source of infection soon after birth.

Late-onset infection is more common and is acquired through cross infection within the neonatal unit.

The key to preventing late-onset infection is hand washing and the use of alcohol gels/foams on entering the unit and before and after caring for every baby. Other important measures include using aseptic techniques during invasive procedures.

Infection can also be reduced by keeping the neonatal unit clean and not sharing equipment, such as stethoscopes, between babies. Breastmilk feeding must be encouraged as this allows the gut to be colonised by protective microorganisms.

Evidence on other care practices to prevent sepsis

Observational and quality improvement studies have demonstrated the usefulness of care bundles in reducing the risk of late onset (> 48 – 72 hours of age) sepsis. A care bundle is a combination of two or more evidence-based practices or procedures that can reduce the risk of sepsis. In addition to hand hygiene and aseptic techniques for invasive procedures, skin preparation and education and training are the most common elements of care bundles used to lower the risk of late-onset sepsis.

There is some evidence that the administration of oral nystatin (an antifungal medication) from day one of life, irrespective of whether enteral feeds have commenced, can reduce the risk of fungal infection. Nystatin is cheap and without known harmful effects but is often not available in appropriate formulations for preterm infants in limited-resource settings.

Probiotics (live microorganisms) may have a role to play in the prevention of late-onset sepsis but the results of large randomised clinical trials using different probiotics are inconclusive.

There is no evidence that oral lactoferrin supplements or antibiotic-impregnated central lines reduce the risk of late onset sepsis.

Are policies and guidelines to ensure appropriate oxygen management for preterm babies available in your setting? And, what are the main challenges, for staff and parents, to providing high quality care to premature babies within the NICU?

Listen to the audio clip from Dr Pip Chisholm, neonatologist at Homerton University Hospital, on managing the oxygen levels for the preterm baby. 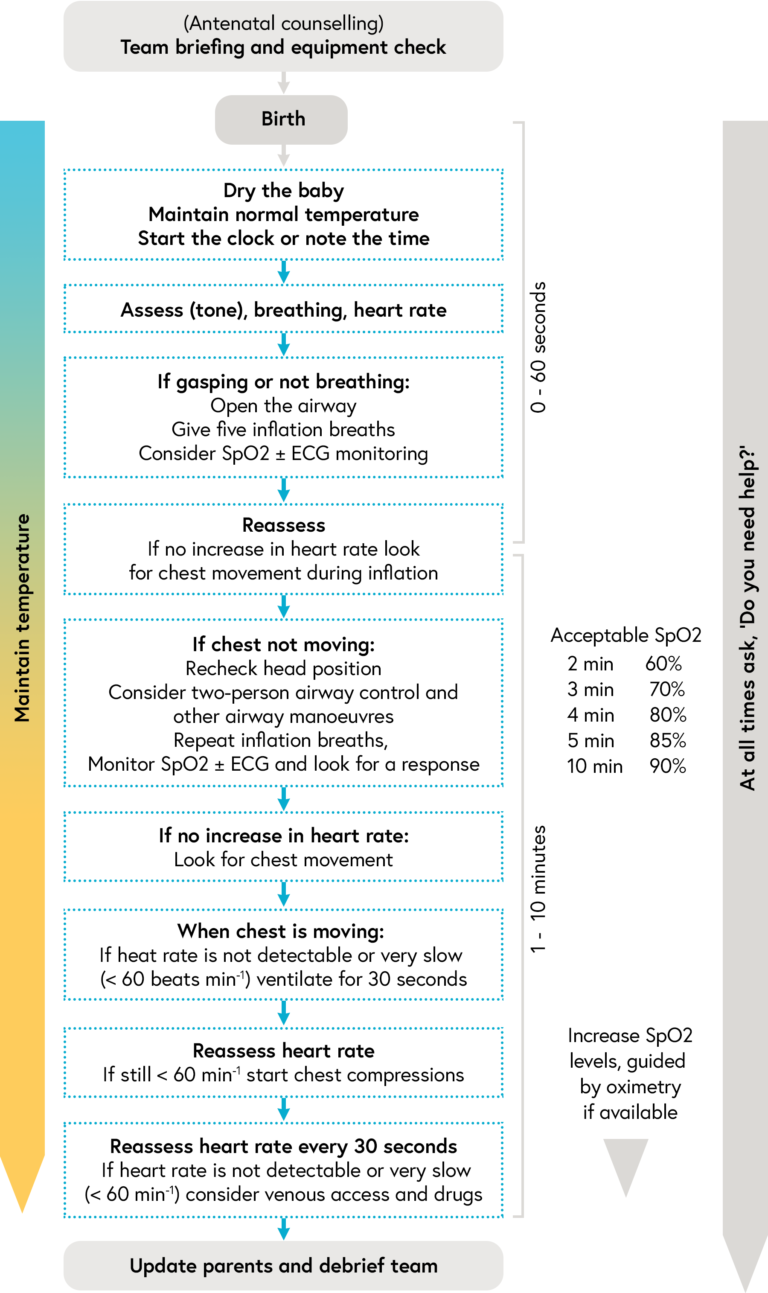