Practical QI action taken by a hospital to tighten the regulation of oxygen saturation for preterm babies to reduce their risk of death and ROP. 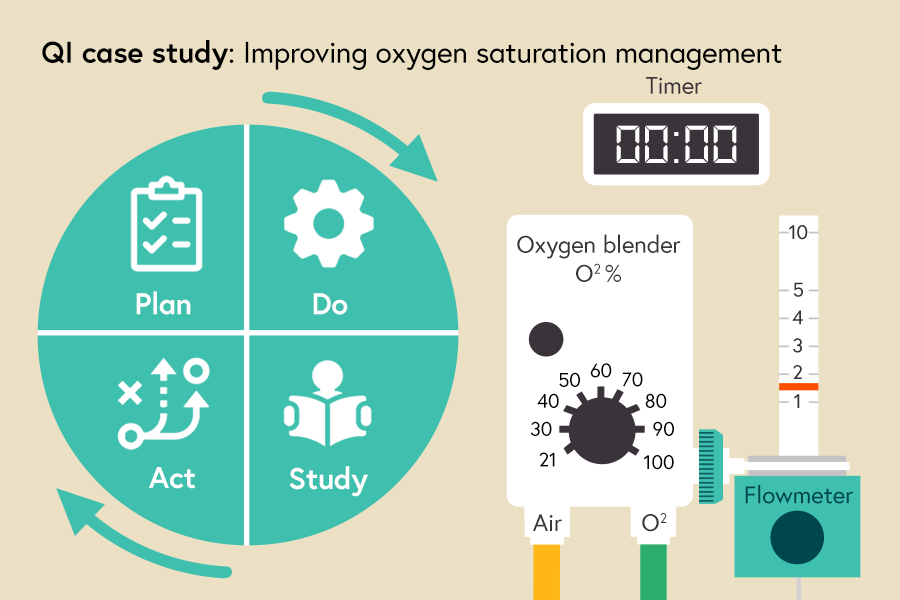 Managing oxygen saturation range in the preterm infant care is always a challenge, even in high resource settings.

In this activity we examine the quality improvement (QI) action taken by a hospital concerned about tightening the regulation of oxygen saturation between 90% and 95% for preterm babies in their neonatal intensive care unity (NICU) and reduce the risk for death and retinopathy of prematurity (ROP).

As you read, relate the steps to the quality of care framework that we first encountered in week 1.

This example has been adapted and simplified from ‘Oxygen saturation histogram monitoring to reduce death or retinopathy of prematurity: a quality improvement initiative.’ J Perinatol 40, 163–169 (2020).

A hospital QI team was formed for the NICU services. The NICU manages about 200 preterm births annually.

The QI team undertook a baseline situation assessment of 6 months of data from the oxygen saturation monitoring alarms set for all preterm babies <29 weeks gestational age. All preterm infants are fitted with a pulse oximeter.

The team found the following practice in use:

They also found that each preterm baby spent:

Balancing oxygen delivery to preterm babies is of critical importance. We know that the risk of ROP increases with increased exposure to both high levels of oxygen (>95%) and the number of fluctuations in oxygen saturation. Mortality risk also increases when oxygen saturation levels fall below 90%.

The QI team recognised and documented that previous Plan-Do-Study-Act (PDSA) cycles had been used to determine the limit settings for oxygen saturation alarms, improve nursing guidelines and train attending fellows to understand oxygen saturation histograms (bar graphs). These actions had led to some important improvements but more needed to be done.

The team undertook a process flow chart analysis to evaluate:

Based on the analysis, along with further discussion and information, the QI team listed three ideas for change:

The team set themselves the following aim:

To reduce the monthly rate of death or severe ROP by 10% in infants <29 weeks gestational age, within 12 months.

Quality of care framework: Steps 5 to 8, the Learning System – Plan, Do, Study and Act
(Click to expand) (Download as PDF)

Share your responses in the Comments. We will rejoin this case study next week and appraise the QI team’s activities through the rest of the PDSA cycles.