A-ROP is a particularly severe form of ROP which can be challenging to identify and progresses rapidly to retinal detachment without urgent treatment
© London School of Hygiene & Tropical Medicine CC BY-NC-SA 4.0

As you read consider why it’s so important to correctly recognise babies with APROP, undertake timely interventions and sensitively counsel the parents and family on the possible outcomes.

APROP is a particularly severe form of ROP which can be challenging to identify; APROP can progress very rapidly to retinal detachment without urgent treatment. When APROP was first reported it was given several names, ‘rush disease’ or ‘type II ROP’ or ‘fulminate ROP’, before being added to the international classification of ROP in 2005. It usually occurs in the sickest and most preterm infants but it is also a sign of mismanagement of oxygen, and can occur in larger, more preterm infants receiving suboptimal care in neonatal intensive care units (NICUs). 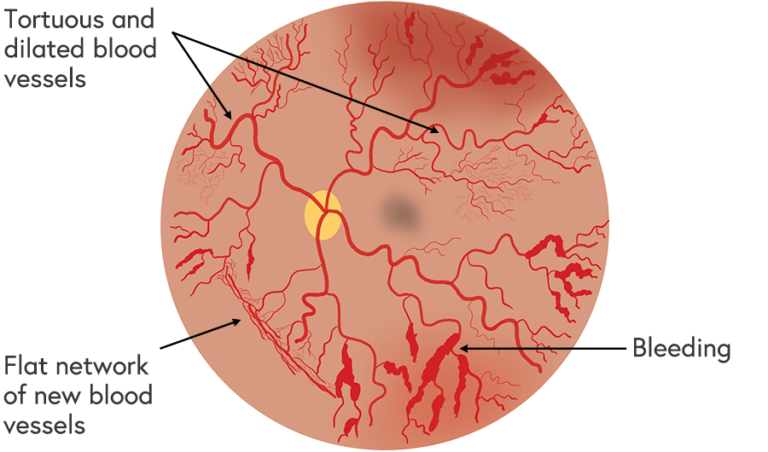 APROP usually occurs in zone 1 of the retina, and can also extend into posterior zone 2. Another important feature of APROP is that it does not progress through the typical ROP stages 1 to 3.

Compare the two retinal images in figure 2 below. In the image on the right, abnormal blood vessels can be seen growing into a visible ridge (white arrow). This is not APROP, but Stage 3 ROP with marked plus disease. It is very important to distinguish APROP from ROP Stage 3 with plus disease. With APROP, treatment needs to be given very urgently – preferably within 24 hours.

Figure 2. APROP (left) and Stage 3 ROP with plus disease (right)

It is important to note that this form of ROP is the hardest to treat and very extensive laser is needed. The eyes should be examined a few days after treatment to see if the ROP is beginning to resolve. Additional laser treatment may be needed for “skip” areas (areas of untreated avascular retina) and an intravitreal injection of anti-VEGF agents may also be needed.

Lucas was born in hospital 11 weeks early, at 29 weeks gestational age with birth weight of just 1100g. He developed neonatal sepsis and also apnoea (episodes when he stopped breathing in his sleep) and spent 33 days in the NICU. He was given supplemental oxygen from shortly after birth for 20 days, including three days of continuous positive airway pressure (CPAP) ventilation, and he needed two blood transfusions to correct anaemia. 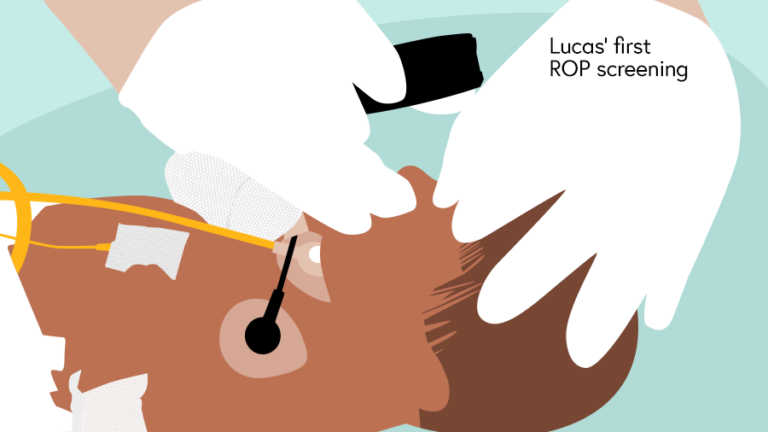 (Click to expand)
Lucas’ first screening for ROP was performed at 32-weeks postmenstrual age (PMA), that is three weeks after he was born. The ophthalmologist noted a poorly dilating pupil, a small zone of vascularisation and dilated, tortuous vessels at the posterior pole of the retina suggestive of zone 1 APROP.
Figure 3. A very similar retinal image to Lucas’ right eye at 32 weeks PMA 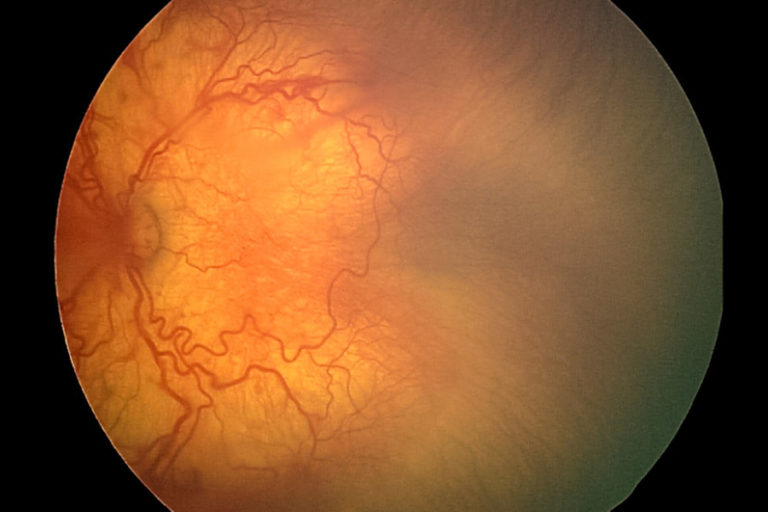 © Anna Ells CC BY-NC-2.0 (Click to expand)
Lucas was treated through uneventful laser photocoagulation of the avascular retina using 532nm green laser, but his ROP disease worsened. Two weeks after laser treatment the pupils were still not dilating well. Fundus examination revealed a very small zone 1 APROP and anti-VEGF treatment was given to both eyes under aseptic conditions.
However, at 48-50 weeks PMA, both of Lucas’ eyes started developing dilation and tortuosity of vessels (plus disease) with progressive fibrovascular proliferation and partial tractional retinal detachment (stage 4A ROP). At 54 weeks PMA, vitrectomy was performed.
One month later, both eyes showed near complete disease regression. At the last follow up, the retina was attached with no evidence of retinal traction. The neonatal nurse counselled the parents regarding the need for close and long term follow up of Lucas’ retinal status and to detect refractive errors.
Figure 4. Example of resolution of plus disease and regression of fibrovascular proliferation in both eyes after laser treatment for APROP

APROP is a challenging disease to diagnose and treat. Lucas received excellent and optimal care in the case study shared here. What are the health system challenges to deliver optimal care for ROP and APROP in your setting? How should the system begin to address these issues? What can you do?