Skip main navigation
Home / History / British History / Robert Burns: Poems, Songs and Legacy / What Is a Burns Supper and What Is the History of It?

What Is a Burns Supper and What Is the History of It?

In this short article, historian Catriona MacDonald looks at the history of Burns Suppers. 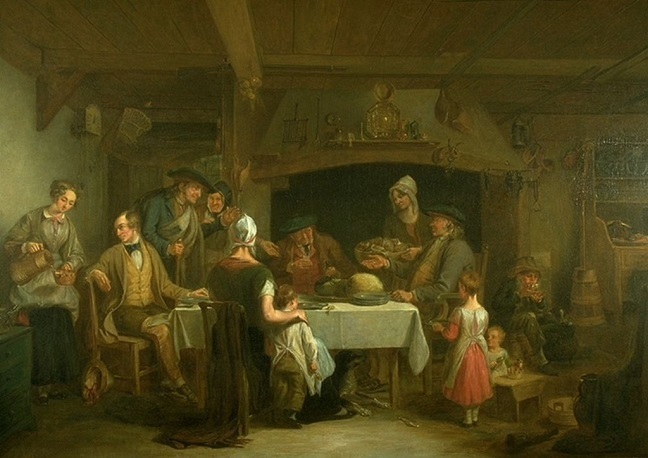 Some hae meat and canna eat
And some wad eat that want it:
But we hae meat and we can eat,
And sae the Lord be thankit.
(The Selkirk Grace)

With these words of prayer and thanksgiving, supper guests across the world on 25 January seek divine blessing on an evening of hospitality and conviviality to mark the birth of the poet Robert Burns and celebrate his life. This combination of religiosity and fraternity we have already seen in the poetry of Burns, and they regularly appear together in the ways in which he has been remembered, most notably in Burns suppers.

Arguably, the first Burns supper was held in Alloway, the poet’s birthplace, in July 1801, when nine guests sat down to a meal of haggis and sheeps’ head. (I say arguably, as it was actually designed as a memorial dinner.) The idea of commemorating the bard in this manner had been the brain child of John Ballantine, a former Provost (mayor) of the town of Ayr, but it was Reverend Hamilton Paul – a clergyman and later the author of The Poems and Songs of Robert Burns (1819) – who organised this most memorable evening that would have a long-lasting legacy.

View Course
Sociability and sensibility combined to foster a commemorative practice that suited a Scotland that was now familiar with Enlightened values and polite tastes, but still alive to the rustic, the proletarian and bawdy elements of peasant culture. Scotland was changing in these years – developing from a rural and agricultural country to one in which urbanisation was gathering speed, and commerce and manufactures were heralding the beginning of the Victorian age.
It is only fitting, then, that two of the first Burns Clubs would emerge in small town Scotland: in Greenock (where a Burns Supper was held in 1802), and in Paisley – a town which boasted a Burns Club from 1805. In communities like these, with strong civic traditions, a Burns Club spoke to an extant sense of local pride and public duty. Here was fertile ground for the growth of fraternal associations in which values of self-worth and philanthropy could unify the urban worker with his upwardly mobile neighbours. In an increasingly commercial age, and when the encroachment of ‘Anglicised’ tastes threatened to erode much that was left of distinctive Scottish cultural practice, Burns clubs, with their annual suppers, offered a way of reaffirming Scottishness.

It would not take long before the Scottish diaspora would export this new tradition: Oxford University students held a supper in the bard’s memory in 1806 and four years later, the British capital, London, experienced its first supper. The Burns Festival of 1844 in Ayr also promoted this new cultural phenomenon to a broader world-wide audience, and the creation of the Burns Federation in 1885, bringing together hundreds of Burns Clubs throughout the world, did much to foster the associational foundations on which Burns suppers would thrive. The vitality of the Burns cult worldwide was first stimulated by British imperial consolidation in the nineteenth century and globalisation in the twentieth century. The Burns Club of London was established in 1868; the Burns Club of Dunedin (New Zealand) dates from 1861, and the Burns Society of New York was founded in 1871.
Burns suppers, however, can be hosted by anyone: they can be formal or informal, on a large scale or little more than a family gathering. You don’t need to be in a club to organise a successful supper. And that’s just as well, perhaps, for female fans of the poet.

One of the attendees of the first supper in Alloway in 1801 was Primrose Kennedy. Some have suggested that this offers grounds for believing that the first supper acknowledged the role of women in Burns’s life and work by according them a place at his table. However, Primrose Kennedy was Captain Kennedy, a well-known military hero in Ayrshire.
The tradition of male only clubs and suppers was there from the beginning, and it would take time for women to be accorded a serious role. The years between the two world wars saw the foundation of many Ladies Burns clubs in an attempt to address this issue: Shotts boasted an all-female club in 1920, and Annan Ladies Burns Club (which is still going today), dates from 1928. The strength of feeling was apparent to all in these years: while some male-only clubs held compensatory Ladies Nights with polite games to entertain their guests, a columnist in the Scotsman newspaper noted in 1929:

… surely women have even more reason to remember the great poet who paid them so much homage more than he ever did to his own sex. Burns, indeed, might be claimed as the patron saint of women, if they have not one already.

Things have changed in the last hundred years and male-only clubs and suppers are increasingly rare: still, some Burns Clubs – Paisley and Calgary are two examples – hold out.

Regardless of the gender of the invitees or top table participants, the ceremonial of a Burns supper accords women a role in the Toast to ‘the Lasses’. The traditional Burns Supper has a number of core elements and their sequencing is a fundamental feature of a supper ‘done properly’. The evening typically runs like this:

Much can be learned from a study of suppers worldwide. In the selection of toasts we may learn a lot about the politics of the hosts, or the politics they assume that Burns would have endorsed. Down the years we can see how in countless Immortal Memory tributes, Burns’s legacy has been shaped by the contemporary interests of those that followed him. What speakers focus upon in the life of the poet has usually got more to do with current priorities than historic pre-occupations. In the style of the ‘Toast to the Lasses’, we can read the gender history of successive generations and how culture has shaped what it is possible to say in public – whether in earnest or in jest – about the relationship between the sexes.

Burns suppers are about so much more than eating and drinking; they’re also about what we wish to forget and how the past is deployed in the present.