In Week 3 our attention turns to King George III, a loving father and devoted husband. Find out how his eating habits differed to the other royals. 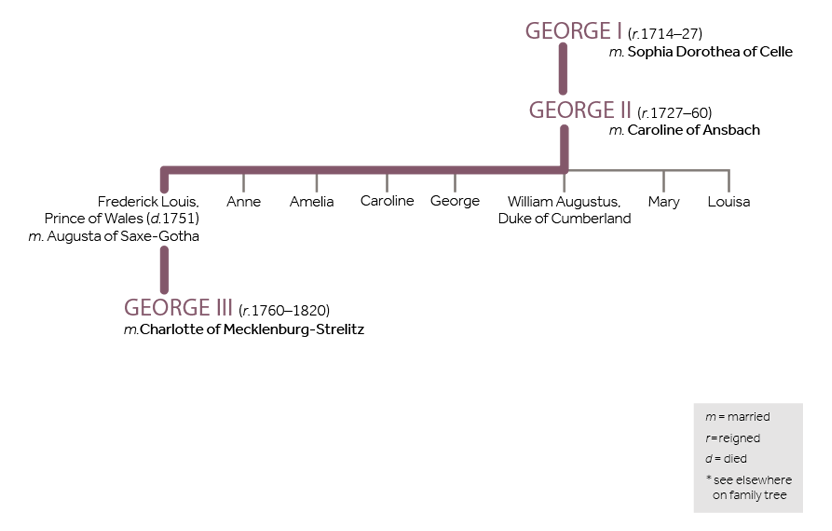 We ended Week 3 with an animated summary of the historical events that took place between George I’s reign, and the succession of his great-grandson, George III. In this Step we’ve provided a family tree for George III and we’ve also included a brief summary of the events that led up to George’s incarceration at Kew.The complete family tree from all five weeks of this course is also available here or at the bottom of this Step.For those of you already familiar with this story you may like to skip straight to the next Step but don’t forget to mark this one as complete before you move on.

For many, the first image that comes to mind is that of ‘mad King George’, but there was more to this monarch than his bouts of mental incapacity.

Following the death of his grandfather on 25 October 1760, George III ascended the throne aged 22. He was still unmarried, but was positively received. The Duchess of Northumberland commented that George was:

‘… in his person tall and robust, more graceful than genteel … with an unparalleled air of majestic dignity. There was a noble openness in his countenance, blended with a cheerful good-natured affability. He was fair and fresh coloured and had now and then a few pimples out. His eyes were blue, his teeth extremely fine. His hair a light auburn … his voice was strong, melodious and clear.’

No sooner had George become king than attention turned to securing his marriage. George and his ministers proposed a number of unsuitable candidates, both English and German, before they settled on Princess Charlotte of Mecklenburg-Strelitz as most suitable.George and Charlotte’s marriage proved to be an affectionate one, resulting in 15 children. Charlotte shared her husband’s preference for a quiet, domestic life and had no wish to be involved in politics. For the first time since the reign of Charles I there were no mistresses at court. George was, it would appear, a loyal husband and a loving father, devoted to his wife.

View Course
The King and Queen were devoted parents but could be harsh and over-controlling too, insisting on strict discipline and rigorous control. While the boys were subjected to a gruelling schedule of lessons, the girls were kept at home, under close supervision. This strict and sober side to George III, his wife and his court, sits at odds with the image many have of him as the ‘mad king’.It wasn’t until 1788 that George III’s mental health became a notable issue and by October, the King was seriously ill and sleeping badly. He was hoarse from talking relentlessly, unsteady when standing, confused and on occasion, violent.It was agreed that if the King were to stand any chance of recovery he should be moved to Kew for peace, quiet and gentle exercise in the gardens.And it’s here that we pick up our story…

Hi there! We hope you're enjoying our article: Monarch of the week
This article is part of our course: A History of Royal Food and Feasting