DNA is often described as being like a blueprint for your body – it contains the code that allows you to build all the various molecules that your body needs to function. Slight changes in this code are responsible to a greater or lesser extent for such diverse features as your susceptibility to a certain disease or the shape of your face.

In forensic science, the main day-to-day use of DNA is as an identification technique where we aim to match a DNA sample found at, for example, a crime scene, to a specific individual. Rather than sequencing all of the ~6 billion bases of DNA that comprise your genome, we instead look at a few very short segments of DNA that have been chosen because they are highly variable between different people. These segments of DNA do not code for any of those molecules we said your body needs to function, and instead can be simplistically considered as ‘filler DNA’ between the more important parts.

The segments of DNA we look at are called short tandem repeats (STRs). These are short DNA motifs (typically four base pairs long) that are repeated multiple times in tandem (ie next to each other). An example of a DNA motif could be AGAC, and this could be repeated four times such that the full DNA sequence is AGACAGACAGACAGAC. The number of repeats can vary such that it could be four repeats, five repeats, six repeats etc and it is this variation that is vital in allowing us to distinguish different people.

For DNA profiling, we look at a selection of different STR markers that are located at various places on these chromosomes. For example, one marker analysed is called D12S391 which is found on chromosome 12 – every person will have two copies of this STR marker (one from each parent) and from one parent they could have received a copy with, say, 12 repeats while from the other parent they received a copy with 15 repeats, so the genotype at this marker would be 12,15. The combination of these numbers (genotypes) at multiple different STR markers is what constitutes a DNA profile. 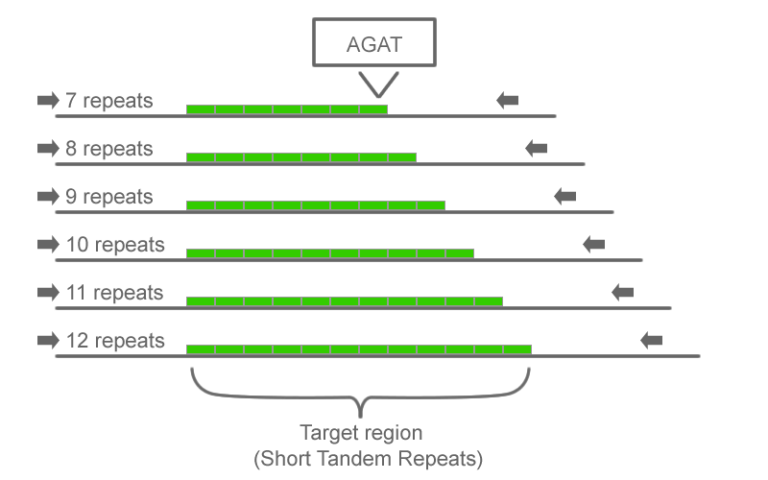 Is it surprising that the evidence used to prove someone is innocent or sentence them to life in prison is based on such a simple change in the DNA?