In 1995, the United Kingdom was the first country to set up a national DNA database (NDNAD) for crime solving purposes, operating within England and Wales. The idea behind forensic DNA databases is that criminals who commit serious crimes have often committed more minor crimes before. By having a database containing the DNA profiles of all convicted offenders, it is therefore possible to link them with ongoing criminal activity. The NDNAD contains DNA profiles both from convicted offenders and separately from crime scene samples – a search of the database is then able to show whether a newly uploaded crime scene sample matches to a person who has been arrested before. It is also able to link crime scenes, for example connecting separate sexual assault cases that are all being committed by the same serial attacker. The database is operated by the Home Office, being accessible to only a small number of people (with no direct access by the police) and is monitored by various different independent regulatory and oversight bodies.

All individuals arrested for a recordable offense in the UK (essentially anything except minor motoring offenses) have a sample of their DNA taken at arrest which is then analysed and uploaded onto the NDNAD to be searched against crime scene samples from unsolved cases. As of 31 March 2016, there were just over five million subject (person) profiles on the NDNAD including 8,376 sets of identical twins and ten sets of identical triplets, with 80 percent of individuals being male and 42 percent being under the age of 25. In 2017, the hit rate between a newly uploaded crime stain and an individual on the database was over 63 percent. In 2012, the Protection of Freedoms Act was enacted following a 2008 ruling by the European Court of Human Rights and this has resulted in the deletion of over 1.5 million DNA profiles from the database. The ruling stated that it was a breach of an individual’s human rights (the right to privacy) to have their DNA profile retained indefinitely on the database (following arrest) if they had not subsequently been charged with a crime or had been found not guilty at trial.

Internationally, there are now 56 different forensic DNA databases worldwide, representing a collection of over 85 million DNA profiles as of 2018. The largest database is currently held by China, and together with the USA, UK and France, these four countries have generated over 85% of all database profiles. Treaties are in place to allow some cross-border searches across different databases, one example being the Treaty of Prüm which sets out how cross-border searches can work for countries within the European Union. 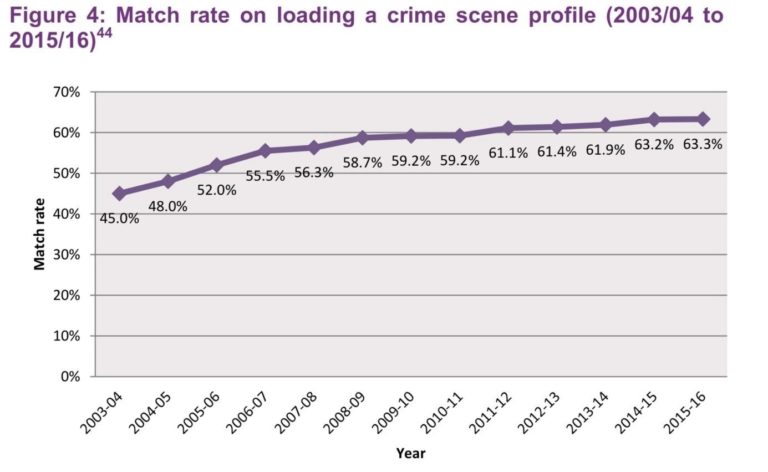 Are forensic DNA databases good for society or are they an infringement of civil liberties? Who should be on the database – should everyone in a country be profiled?