As above, but predicting age.

The prediction of an individual’s externally visible characteristics (EVCs) – like their eye, hair and skin colour – from a crime scene stain is another major focus of DNA intelligence as it can provide significant leads for investigations involving unknown individuals.

Once again, the scientific method behind this analysis is based on the sequencing of single nucleotide polymorphisms (SNPs). While these polymorphisms are not the sole reason behind the development of different colours and shades, they are linked with the relevant genes that are behind these pigmentation traits.

The first EVC informative SNPs to be established in forensic analysis were related to the prediction of eye colour. In 2011, a group of scientists presented a panel of just six SNPs that could differentiate between individuals with brown or blue eyes with 94 per cent accuracy. This panel, known as IrisPlex®, has been since tested by different scientific groups in a variety of samples with great success and can now be part of routine forensic analysis for cases involving DNA samples from unknown individuals.

Following the success of IrisPlex® a number of SNPs have been identified that correlate with hair and skin colour. An extension of IrisPlex® (HIrisPlex®) was announced in 2013 that included an additional 17 SNPs correlating with eye and hair colour, followed by HIrisPlex-S® in 2018 that is based on a total of 41 SNPs and can be used for the simultaneous prediction of eye, hair and skin colour from a DNA sample. This final panel is able to estimate the individual probabilities of three eye, four hair and five skin colour categories.

While these panels show some great potential, a lot of research is currently focusing on improving and validating them, as well as investigating new SNP markers that can increase the prediction accuracies. 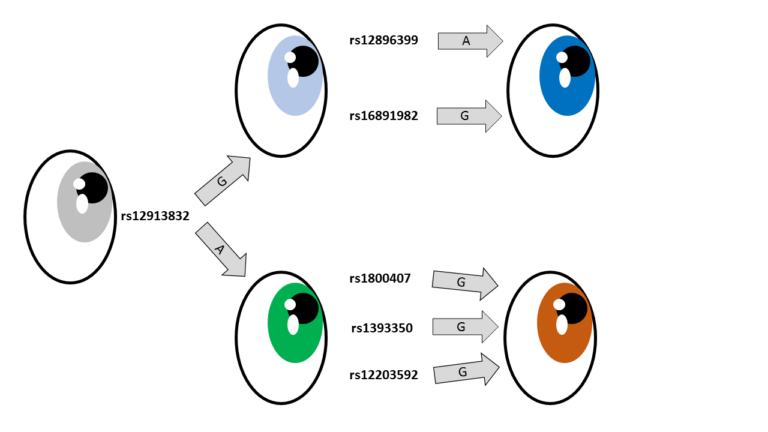