Find out more
Home / Law / Biology & Biotechnology / The Science Behind Forensic Science / Who is analysing what? (Chain of custody)

Who is analysing what? (Chain of custody)

The participant the importance of the chain of custody in the forensic process. Why accreditation is important and the laboratory scientists role in m

When reporting scientific evidence in a forensic context, maintaining the chain of custody (CoC) is essential. The CoC is crucial in proving that the evidence under consideration is linked beyond reasonable doubt to the crime, with evidence often being associated with a person or location. If the CoC is not maintained correctly, the defendant may argue that the evidence cannot be proven to relate to themselves or the crime scene with sufficient certainty. This may limit the chance of a successful conviction.

The term CoC refers to chronological documentation associated with the evidence that records its paper trail, custody, transfer, analysis and disposal. It helps answer questions, such as: who is/was responsible for the evidence? Where has the evidence been and when? What analysis was performed?

In addition, it is required to demonstrate that the possibility that the evidence has been contaminated or tampered with is minimised. This is typically done by the use of tamper evident containers and the evidence being contained within a secure location with only limited access by selected individuals. 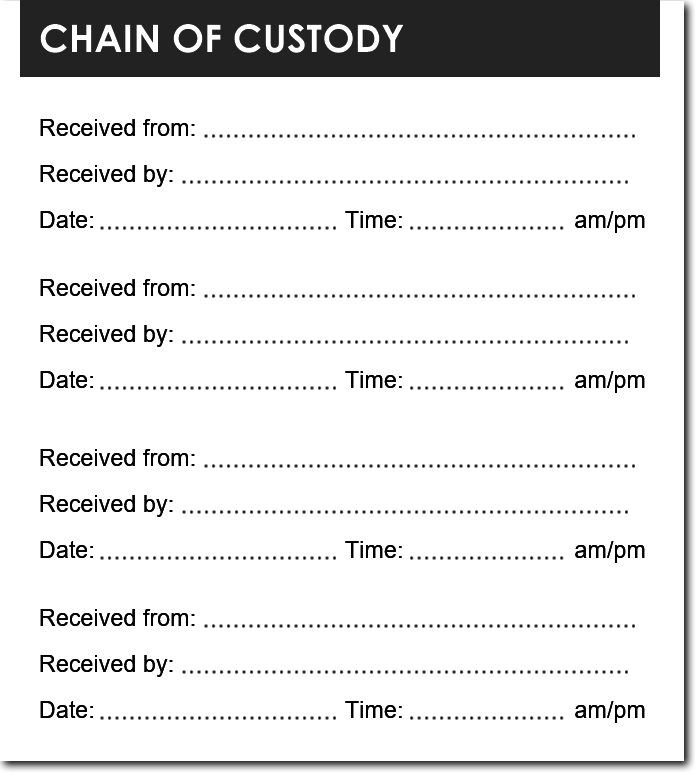 Think of a piece of evidence being collected at a crime scene. Map out a timeline of what would happen to the evidence between its collection and presentation in court. Consider who is holding/responsible for it at each stage and what actions they are likely to take.

Put yourself in the position of the defendant or their representative, and try and identify places in the CoC where you would question its integrity. For instance, how can you show this is my blood sample and it isn’t another sample received by the laboratory?

What information or processes would be required to answer these questions?