Mass spectrometry (MS) is an instrumental technique that is used to determine the mass-to-charge ratio (m/z) of an ion. The measurement of the m/z can provide structural information about a compound of interest (analyte), thus allowing for confirmatory identification. In addition to structural information, MS can also be used for quantitative analysis (ie determining how much of the analyte is present in a sample). The technique is very sensitive, allowing the determination of ultra-trace levels of analytes reaching down to attomolar concentrations (10-18 M). These instruments can also be coupled to liquid or gas chromatography (LC or GC) enabling determination of analytes in very complex samples.

Hard ionisation can include electron impact (EI) where a sample in the gas phase is bombarded with electrons leading to ionisation. This process is considered a hard technique as analytes ionised will often fragment extensively, which can lead to a loss of information in regard to the molecular ion (precursor).

Soft ionisation includes electrospray ionisation (ESI), where a sample is introduced through a capillary tip that has an electric potential of 2-5 kV applied. This enables the formation of a Taylor Cone that will emit small charged droplets. With the aid of a desolvation gas, the analytes present in the droplets are transferred to gas phase ions. The technique is considered soft as fragmentation of the molecular ion is reduced, and the molecular ion can then be later fragmented by the mass analyser to provide additional structural information.

The types of scans are selective as the mass analyser is able to focus on ions of interest, whilst filtering out other ions. For example, in an SRM scan, the first quadrupole is set as a mass filtre so that only one ion of a specific m/z (the precursor ion) is allowed to pass through into the second quadrupole. The second quadrupole is also known as a collision cell, where the precursor ion collides with an inert gas (eg nitrogen) and fragments into smaller fragment ions, known as product ions. The third quadrupole is then also set to filtre so that again only one of the product ions pass through to reach the detector. The process of scanning a specific precursor ion fragmenting into a specific product ion is known as a SRM transition. The transitions can either be used quantitatively (where the most abundant product ion is monitored for) or qualitatively. To identify analytes that may be present within a sample, usually, one quantitative ion and two qualitative ions will be monitored for. 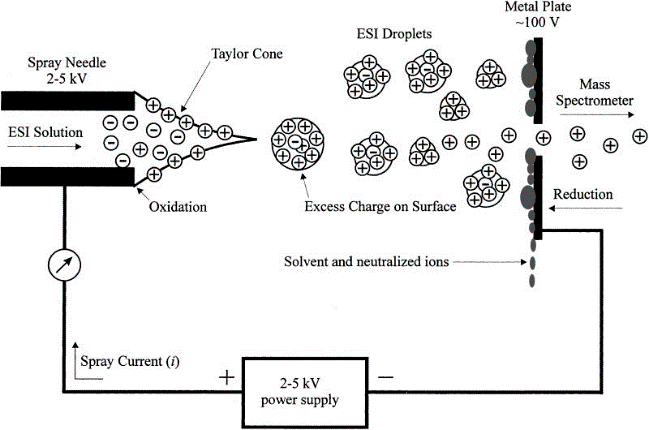 SRM transitions are selective and useful for identification. Why is it that analysts will normally monitor three transitions (one quantitative and two qualitative) for a single analyte?