Watch as photo historian Denis Pellerin and Dr. Alison Morrison-Low further explore the stereoscopic image in this video.
View transcript
8.5
Denis, can you show us some of the images that you found particularly intriguing in your time down. » Yes, of course. For example, here is a daguerreotype. While it’s not the original mount, it’s been rehoused but it’s still a very interesting piece and in very good condition. Daguerreotypes are pictures on the copper plate which has been with a layer of silver and then you sensitize it and you expose it to the light. This one is probably by from the shape of the mounts on the back and they chose a chess player. It was probably taken with one camera which was, they took the first photo and then they moved it to the right to take the second photo.
57.3
So, it’s in hyper stereo and it shows a chess player. The idea, of course, is that we don’t know anything about this man. Maybe, he was a famous person. Maybe, he was a famous chess player. The idea now is to do some research and try and find out more about this person and find out when this photo could have been taken, probably in the early 1850s but it’s difficult to say. There are no clues at all on the photographs. This is a very nice daguerreotype I’m interested in. This photograph is actually a reprint of an earlier photograph.
95.8
It was made by the London Stereoscopic Company, and the original was probably published in 1857, which is quite early for a paper photograph. It shows a ghost. Ghosts were very popular subjects for the stereoscope and the idea of photographing ghosts was suggested by David Brewster, the inventor of the lenticular stereoscope. This one is particularly interesting because it shows the ghost of Marley talking to Scrooge and what I find fascinating is that this picture was published while Dickens was still alive. So Dickens may have seen a picture like this. It’s interesting to try and imagine what could have been Dickens’ thoughts when he saw a picture like that, his creation for the stereoscope?
146.1
This one is a bit crudely tinted but it’s a very nice picture of a ghost, it’s very convincing. This one I find very interesting because this is a photograph which I have seen before, it shows a Scottish soldier who was taken prisoner during one of the Scottish wars and his jailer is bringing some bread. It doesn’t look like anything much but actually, this is a variant of another photo which happens to be a restaging of John Edward Millais’ The Order of Release. The original of the painting is now at Tate Britain and there is a stereo which was made around 1855, which is very early for a stereo. It’s painted back-cloth, a cardboard door.
201.9
That is interesting because the photographer had everything ready, so he decided to re-stage the painting, and then to do some variance, or telling the story. This is the prisoner in his cell and then the next photo will be his release. Victorians liked stories in several pictures and this is a nice example. It’s very good condition too. This is another example of a photograph that was made after a painting. This is Broken Vows by James Elliott and this was after a painting by Phillip Calderon in 1858. It shows a jilted young woman who is standing at the door while her former lover is getting married. It’s a bit, yeah, of a sad story. It probably appealed a lot to the Victorians.
257
They like stories of jilted women and love. It’s a bit different from the painting because in the painting, she just overhears a lover and his mistress talking and Eliott here added the idea of the church. It’s even more poignant. She cannot say anything, she has to remain silent, and so he’s gone forever. A very poignant story and typical of what the Victorians like and so nicely tinted. Very nice composition and so nice. Again, there are lots and lots of variants of this photo. This one here is what the French call a tissue, what the English call a tissue the French call it “un view transparent” and it was very clever.
308.3
This is a scene from an opera, actually, L’Africaine, which was staged in 1865 and it was impossible at the time to take photos of real actors in a theater because of the lights, the light was too dim to take photos. What they did was that they went to see the opera with a sketch pad. They sketched the costumes and the backdrops and they went back to their studio and they modeled the actors and the dancers and then they painted the picture on the back. So you can see here, there is a scratch and you can see some of the paint. Why did they do that?
359.3
Because when you look at the photo when it’s front lit, it’s black and white, sepia but if you switch the light on and if you look at the photo now, you can see colors. The colors come through. They would have some pinpricks for the highlights, so the jewels, the candles, everything that was highlighted was pin pricked or sometime cut with a razor blade to make it stand out even more when you looked at it. In 3D, it’s amazing of course. They did lots of those, they did over 300 of those photographs of all the plays and operas, most popular plays and operas of the time.

Please share your comments – which of these stereo images most appeal to you? 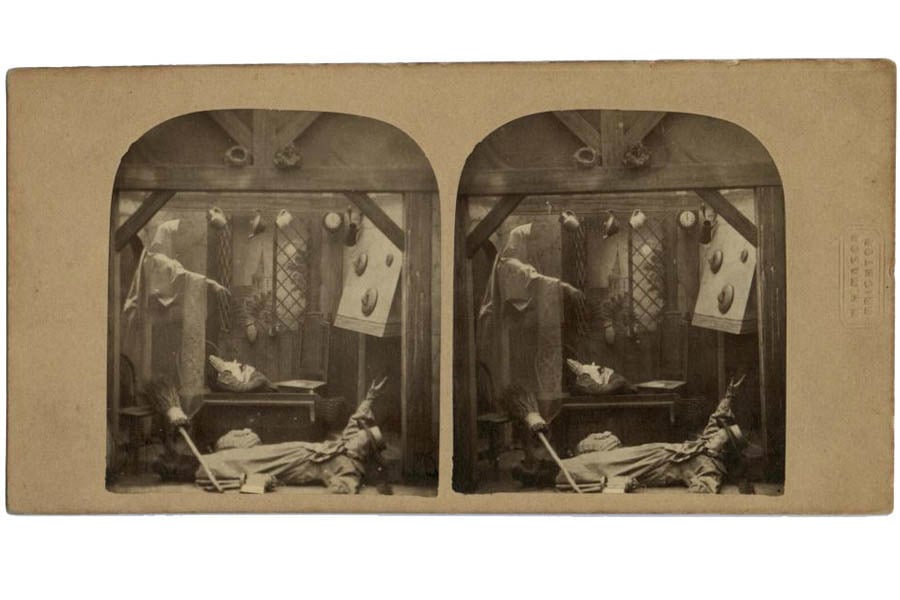