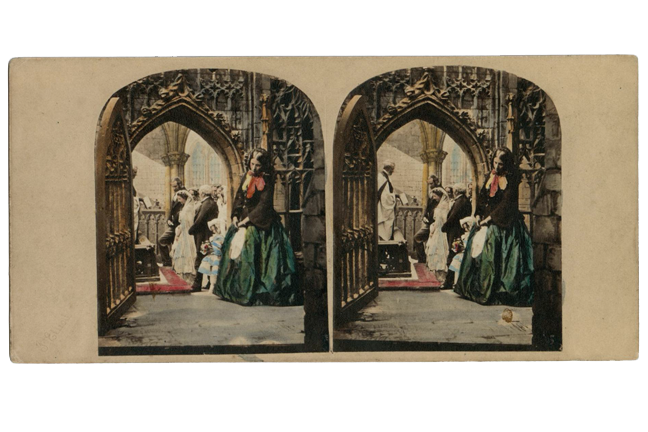 The 1857 stereocard ‘Broken Vows’ by James Elliott was inspired by PH Calderon’s narrative painting of the same name. It illustrates the significant connection between Victorian painting and the new medium of photography.

Created in 1856 by Philip Hermogenes Calderon and exhibited at the Royal Academy in 1857, the original oil painting ‘Broken Vows’ depicts a woman discovering that her lover has been unfaithful to her. As the jilted woman presses a hand to her side, in the partial shade of a wooden fence, the man and his other woman are glimpsed cavorting on the other side, unaware of her despair.

Calderon’s painting is now owned by Tate Britain in London. You may click here to view it online.

The popularity of the painting at the Royal Academy inspired photographer James Elliott to produce a stereocard derived from Calderon’s work. An advertisement in The Times newspaper on 2 October, 1857 announced the new card:

“J. Elliott’s Stereoscopic Group – Just out, Broken Vows, the most striking stereoscopic group ever produced by J. Elliott. Can be had of every respectable dealer in slides and opticians in town or country. Hippolyte Mahy, wholesale depot for Elliott’s, 73, Newgate Street, city.”

View Course
Look again at the image at the top of this Section. Elliott did not slavishly copy the original picture but maintained the theme of disappointed love, a popular motif in Victorian painting. The jilted woman here is pictured inside a church as her former lover marries her rival. Although the setting has changed the physical construction of the scene is very similar. The intricately carved stone church walls and graphic shape of the open doorway add further drama to the emotional tableau.
The commercial and artistic success of Elliott’s stereocard reveals his astute eye for identifying popular paintings and auspiciously adopting them for the mass market, a strategy which other stereo photographers would also employ.

Can you think of any ways in which popular images are adopted – or even misappropriated – for the mass market today? Please share your comments in this section.

The Poor Man’s Picture Gallery: Stereoscopy versus Paintings in the Victorian Era by Dr Brian May and Denis Pellerin