Discover how George Washington Wilson diversified and expanded his business in the 1850s and 1860s. 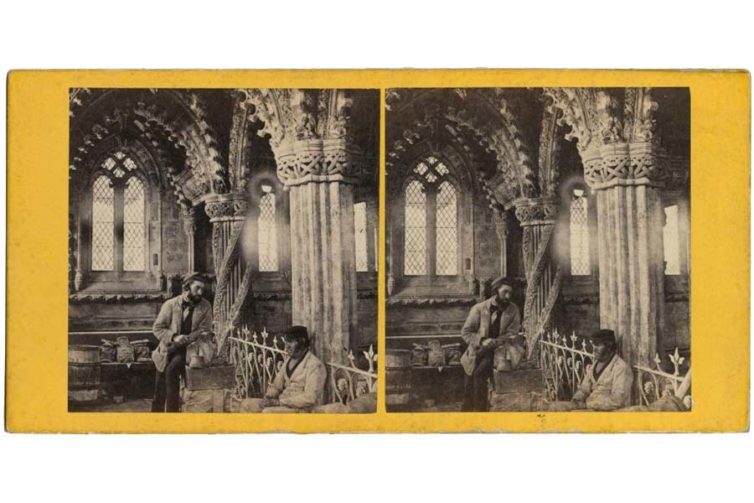 After his partnership with fellow photographer John Hay ended in 1855, George Washington Wilson continued with his portraiture business, photographing thousands of Aberdeen’s citizens as his studio became the most prominent in the city. 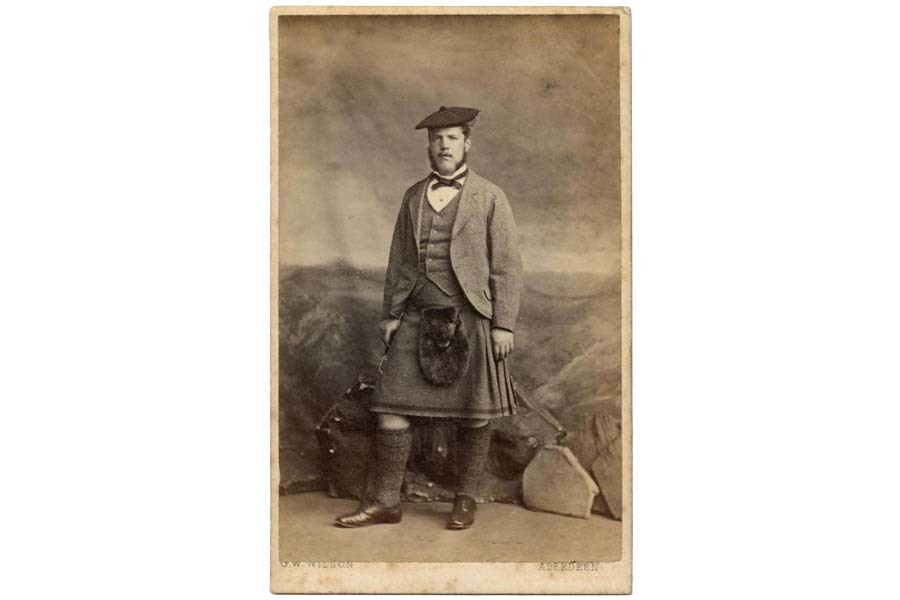 The most popular form of 19th century photography was undoubtedly the carte-de-visite, a size of photograph based on the traditional visiting card, and relatively inexpensive. With ‘cartomania’ continuing until the mid 1860s and carte-de-visites being made in the millions across the globe, this provided Wilson with a lucrative income.

Notably in 1857 he produced a group portrait (below) which involved the first known use of photo montage or collage, although apparently only the esteemed men of Aberdeen were deemed suitable for these composite groups of miniature portraits. 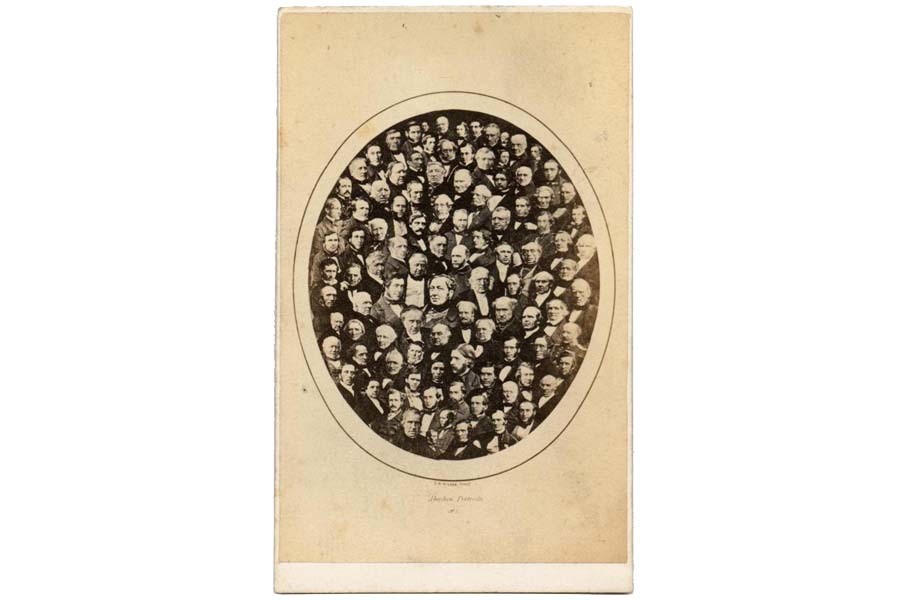 Wilson achieved this novel effect by cutting and pasting small portraits into an oval shape and then re-photographing the collage. This was then placed in the window of his friend George Walker’s bookshop in Aberdeen and soon captured the attention of the general public.

Wilson continued exploring the possibilities of photography as he ventured into landscape stereos, first testing the market in the Aberdeen area before expanding his horizons throughout Scotland and then across the rest of Britain. 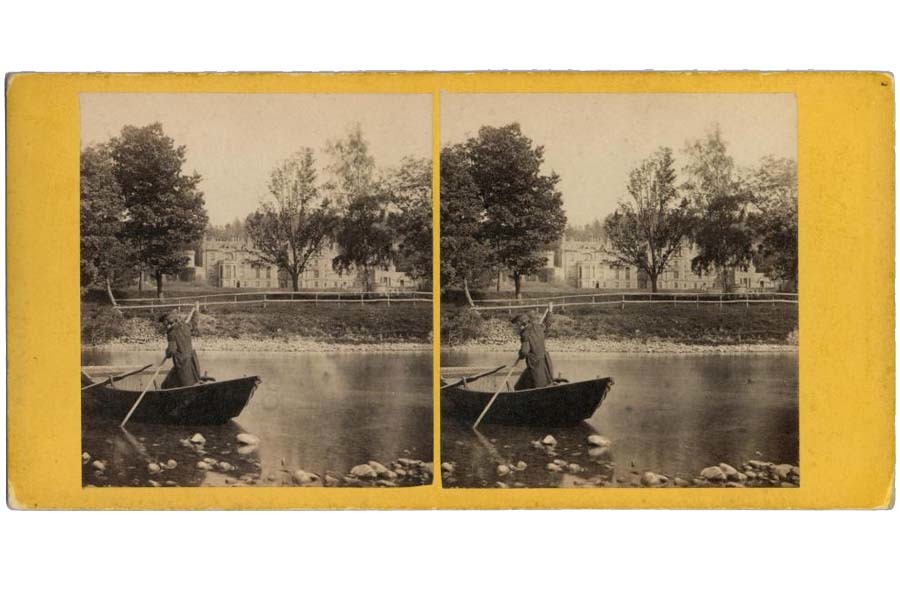 His first catalogue held forty-four views of Scotland which represented the castles and romantic views that appealed to the burgeoning tourist trade, buoyed by the development of the railways and influenced by Queen Victoria’s much publicised explorations north of the border. 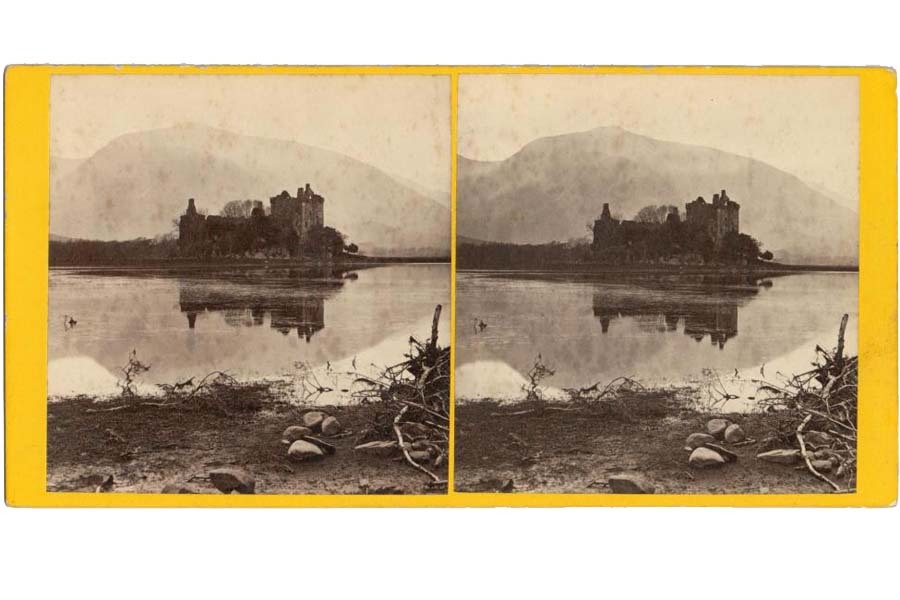 A significant technical challenge that Wilson overcame was the photographing of detailed skies, an important element within emerging landscape photography. 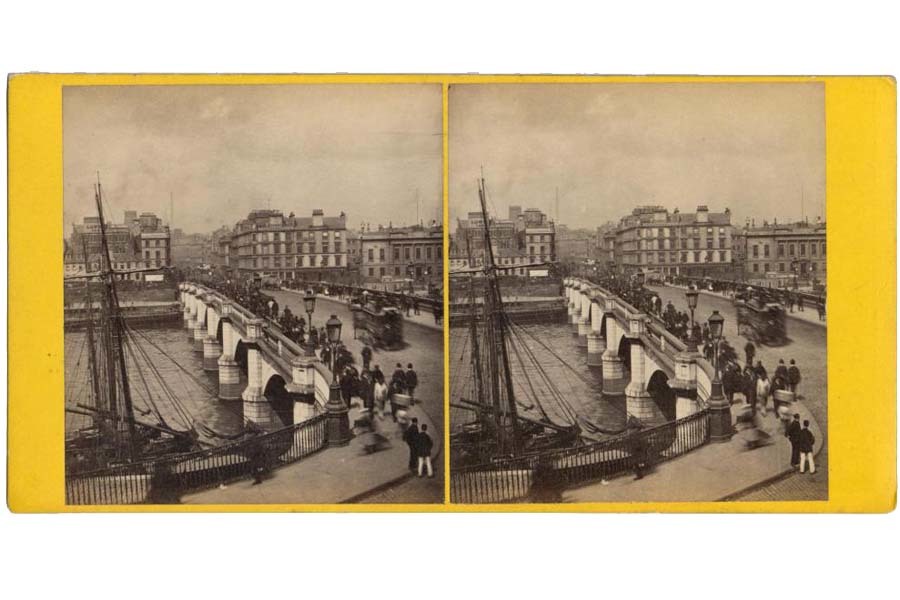 Experimenting with the chemistry involved in the wet collodion process, Wilson wrote, “When my subject is well lighted, I prefer pyro-gallis acid as a developer, but when there is a great contrast in the picture, and an undue portion of deep shadow, then iron is much to be preferred.”

This understanding of the issues of light and the means of manipulating the chemicals in the darkroom led to Wilson’s use of an iron developer to capture the subtlety of cloudy skies when previously they would have appeared entirely white; other photographers were known to have painted in this detail or to have combined two negatives of differing exposure or density. 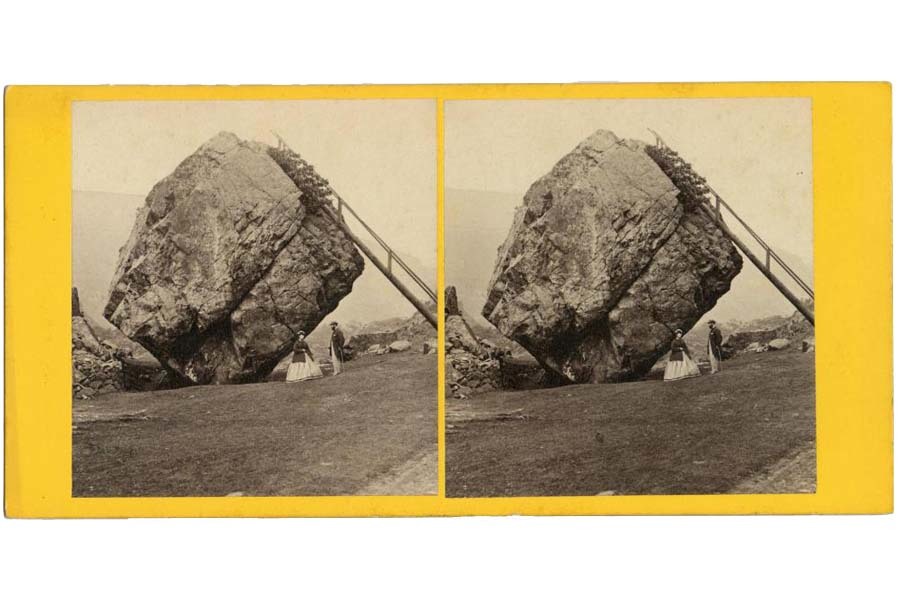 Stereocard depicting the Bowder Stone, Borrowdale, by George Washington Wilson & Co., Aberdeen, IL.2003.44.6.1.326 © Howarth-Loomes Collection at National Museums Scotland
Always aware of the vulnerability and whimsy of the market, as early as 1861 Wilson anticipated a waning in the demand for stereoscopic images and began producing single prints for sale to the public. These images may still be found pasted into Victorian photo albums, alongside family portraits and holiday snaps.
Concurrently Wilson also began producing larger ‘cabinet’ cards for the portrait market, again keeping an astute eye on the trends and demands within the photography industry. His frequent travels across the British Isles, including to London and other significant tourist spots, provided him with both new locations to document and also helped him to stay connected with the photographic zeitgeist.

This systematic cataloguing of the country’s most significant geography and tourist destinations allowed him to build a store of negatives described by J. Wood in an 1871 edition of the British Journal of Photography as “for number and excellence, I believe, will not soon, if ever be surpassed… (Wilson) left off numbering the proofs he had taken from them and sent out – at the time amounting millions – which are now profusely scattered over the habitable globe.” 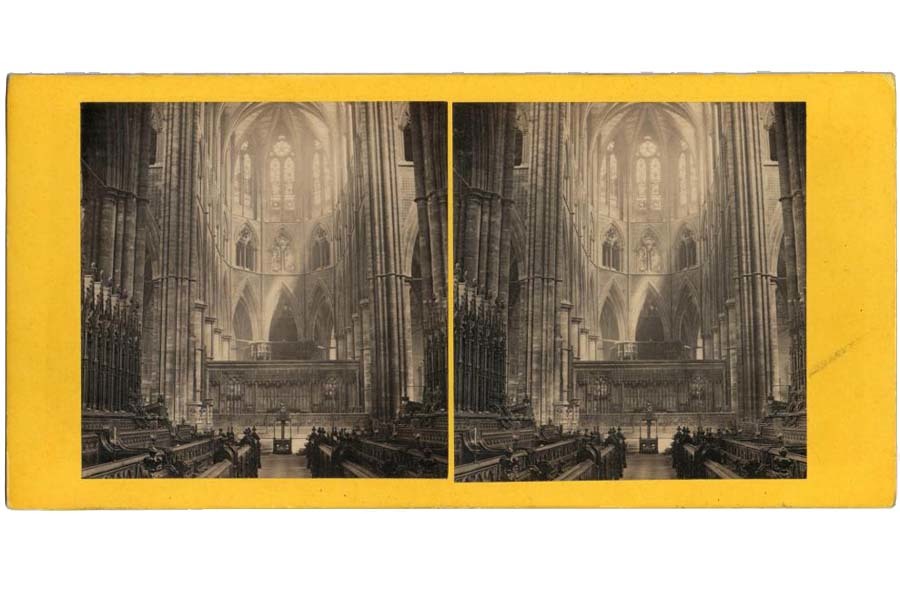 Stereocard depicting Westminster Abbey, by George Washington Wilson & Co., Aberdeen, IL.2003.44.6.1.248 © Howarth-Loomes Collection at National Museums Scotland
George Washington Wilson handed over his business to his sons, Charles, Louis and John Hay Wilson, in 1888. Wilson’s images became so popular that other photographers tried to capture his success by photographing the same, popular locations; in an obituary in 1893, it was said that:

‘we know of some who did not disdain to follow Mr Wilson’s footsteps in such a literal fashion as, having one of his views in hand, and observing the relation of one portion of scenery to the other, to eventually by this means discover the identical spot where his camera had been planted, and there also plant their own tripods’