In this article, Moray Swanson, Graduate Assistant (Parasitology) at the University of Glasgow explains how and why we are consuming more seafood. 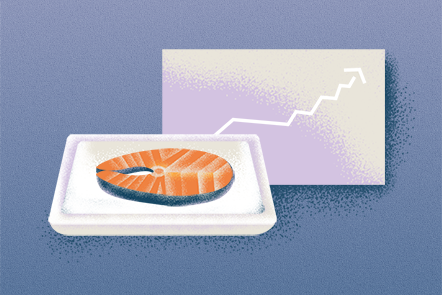 Which species are we eating?

We are currently in what some have dubbed “The Blue Acceleration”. This refers to the exponential expansion of humans into the oceans and blue spaces since the 1970s for industry, energy, resource mining, tourism, and food.[1]

When zooming in on fisheries you may assume the increase in seafood production is due to increased population, however, despite population growth, global per capita consumption of fish has more than doubled in the past 50 years. So how and why are we consuming more seafood? Where are these changes happening? Also, which species are targeted and what does this mean for our blue planet? 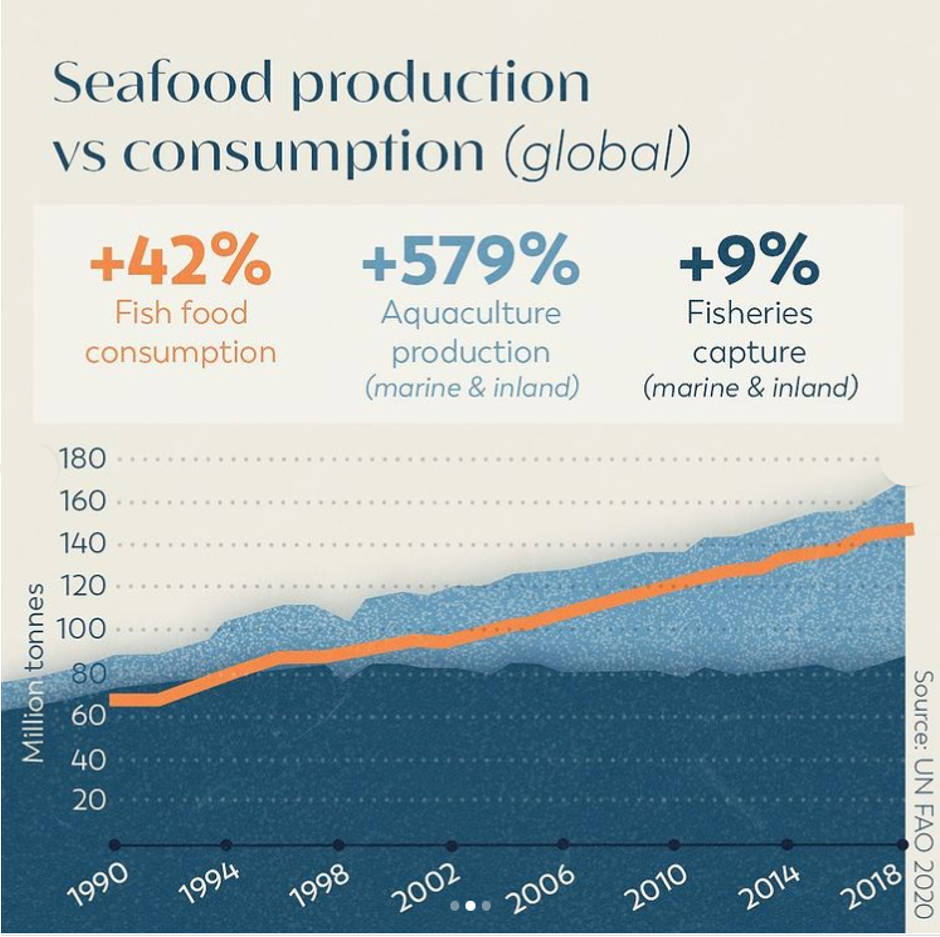 How are we supplying this growing demand?

The short answer is aquaculture*. When looking at global trends, capture fisheries, both marine and inland, have been fairly stable in their production since the 1990s with only a 9% increase between 1990 and 2018.

*Aquaculture: The rearing of aquatic animals or the cultivation of aquatic plants for food. Can be within the natural system or on land.

Where is seafood demand and consumption growing?

With fish being a rich source of macro-and micronutrients, while becoming more accessible through aquaculture production, it has become an efficient way of diversifying diets and supporting health. However, fish is not merely for subsistence – with wealth increasing in populations in these regions, so does the taste for more ‘luxury’ grade fish at the top of the food chain, such as tuna and salmon.[2],[6]

On top of this, with a globalised market and increased trade efficiency, it’s more common for consumers to be eating fish not native to their regions, and also adopting other fish-eating customs such as the global expansion of sushi.[4] However, international trading of fish tends to be restricted to urban areas where there are more facilities to freeze fish, prolonging their shelf-life.

What species of seafood are we eating?

It’s important to note that aquaculture is not purely for finned fish – in literature when referring to ‘fish’ or the fisheries sector, it is often referring to all edible aquatic life including organisms like mussels, prawns, and even algae. Shelled molluscs (mussels, clams, oysters, etc.) are, by weight, the majority of aquaculture production globally.[3]

But looking at finned fish, freshwater carp species are the most commonly farmed, while anchovies are the most common wild-caught species[3]. However, there are over 600 species produced in aquaculture and over 1,800 caught in the wild[3]. As a result, all levels of the food web* can be impacted – meaning, there are many different aspects of ecosystem functioning and ecosystem services which can be impacted by fisheries and aquaculture.

*Food web: The prey and predator relationships between all the species of an ecosystem (who’s getting eaten by who, and who’s eating who).

*Ecosystem function: All of the elements that make up an ecosystem – physical, chemical and biological – which allow it to maintain life.

*Ecosystem services: The benefits we as humans get from ecosystems. Some prominent examples are food, water purification, and carbon storage.

How does the future look?

In terms of aquaculture, some research shows that filter feeders, such as molluscs, aid water quality and are a benefit to the region, while also requiring little energy to farm, making them a sustainable product[8]. However, on the flip side, mismanagement of molluscs farms can lead to the introduction of toxins and diseases to the mussels and potentially to the humans who consume them. Furthermore, there are also worries that increased filter feeders can impact the natural flow of nutrients in the system, negatively impacting other parts of the local ecosystem[4].

Moving up the food chain, one of the main points supporting aquaculture is that it removes pressure from wild fish stocks, increasing food security and avoiding incidents such as the infamous Newfoundland cod fishery that collapsed in the 1960s.[7] However, there have been studies showing that offshore aquaculture (where the cultivation cages are held within the open ocean) can lead to increased diseases and parasites in wild populations. This is due to the densely farmed populations still inhabiting the same body of water as the wild populations, which allows for the transmission of diseases and parasites.[10] Furthermore, since salmon are higher up the food web, wild-caught fish – such as sardines – are needed to feed the salmon in aquaculture, depleting stocks of those species around the world.[9]

Circling back to wild capture fisheries, a big ecological impact is from bycatch*. Bycatch can include endangered and protected species too. Smaller target species such as prawns are the worst for bycatch, as finer nets are needed to capture them and as a result, there’s less discrimination in what’s caught.[11] Around 9.1 million tonnes of bycatch happen annually, or 10.8% of the total catch weight.[3]

*Bycatch: the unwanted fish and other marine creatures trapped by commercial fishing nets during fishing for a different species.

Truly sustainable seafood requires proper management and understanding of each specific exploited ecosystem and species. But there is still a lot to figure out, as John Shepherd, a professor of Marine Science at the University of Southampton once said:

“Managing fisheries is hard: It’s like managing a forest, in which the trees are invisible and keep moving around”.[5]