Find out more
Home / Nature & Environment / Climate Change / Sustainable Seafood: Barriers and Opportunities in the Fishing Industry / Are we farming the right species?

Are we farming the right species?

In this article, we discuss the most commonly farmed species and whether other types of seafood may just hold the key to sustainable seafood farming.
© FoodUnfolded

Despite their modest position relative to the rest of the food chain, seaweed, sea squirts or shellfish, might just hold the key to sustainable seafood farming.

The most commonly farmed species that you are likely to have seen in shops or restaurants in Europe are the following three:

However, in terms of sustainability, farming species belonging to a lower trophic level*, such as seaweed, sea squirts, or shellfish, brings additional benefits.

*Trophic level: an organism’s position in the food web where apex predators (like sharks and tuna) are at the top of the pyramid and primary producers (like plants and algae) at the bottom.

Why is farming seaweed more sustainable and cheaper than salmon?

To first understand why trophic levels matter for sustainability, we need to take a look at how energy moves through the food chain: primary producers like seagrass and algae (level 1) become food for first-order consumers like shellfish (level 2), who are then consumed by intermediate predators (level 3), and so on. 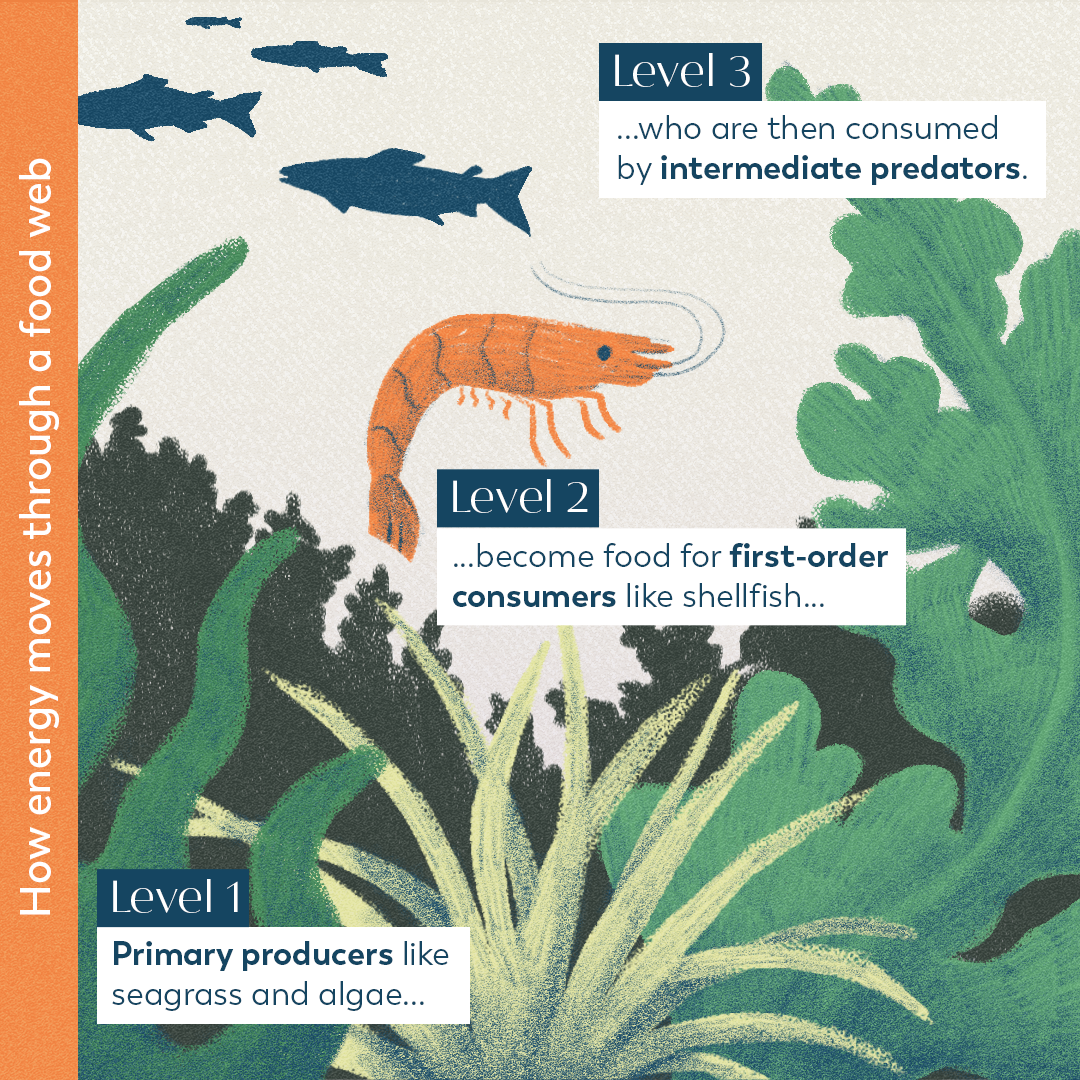 How energy moves through a food web

The energy needed to support the same weight of an organism gradually increases as you go up each trophic level.[6] This means that almost 1,000 kg of seaweed (level 1) is needed to support a single kilogram of salmon (level 4).

Salmon need more energy and food per kilogram of fish than fish at lower trophic levels, regardless of whether that energy comes in the form of animal-based or plant-based feed.[7] 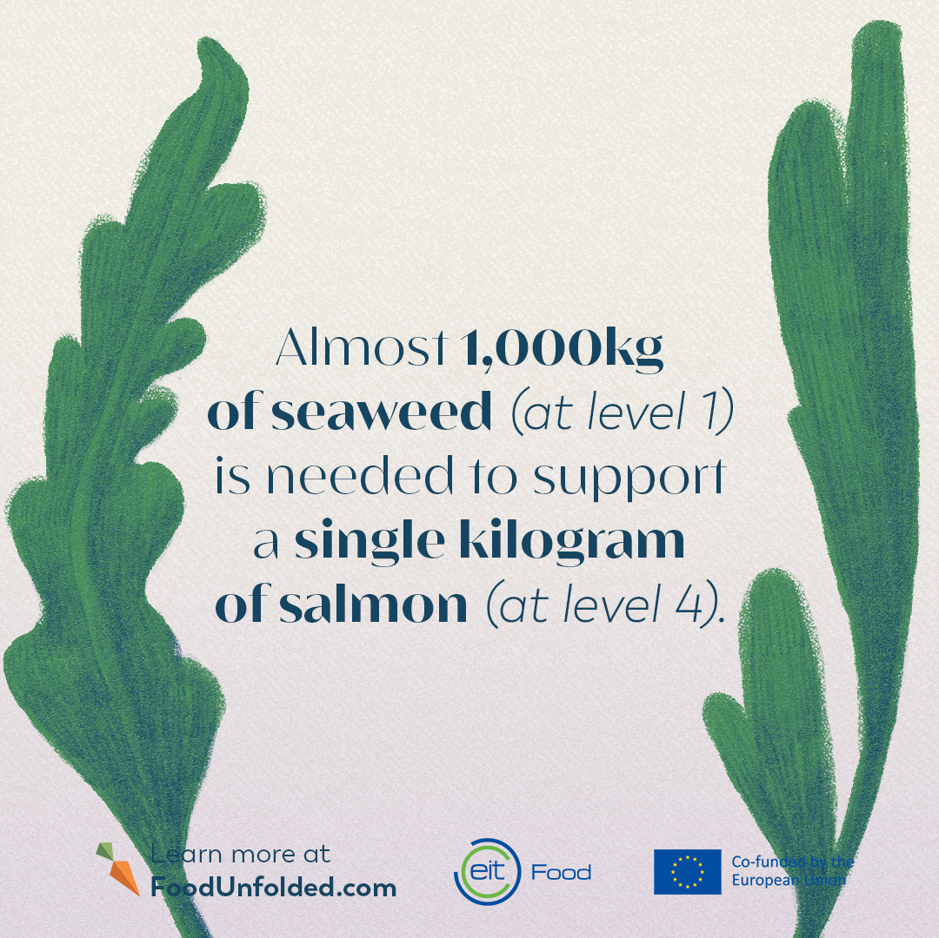 While developments in aquaculture feed have seen improved feed conversion ratios (meaning less food is needed to produce more fish), fish feed still often accounts for over half of the total aquaculture production costs and is further contributing to land clearing to produce this feed.[8]

On the other hand, low-trophic species require only a fraction of the energy input to grow into a product that we can eat – cutting both costs and the resources needed to grow our food. 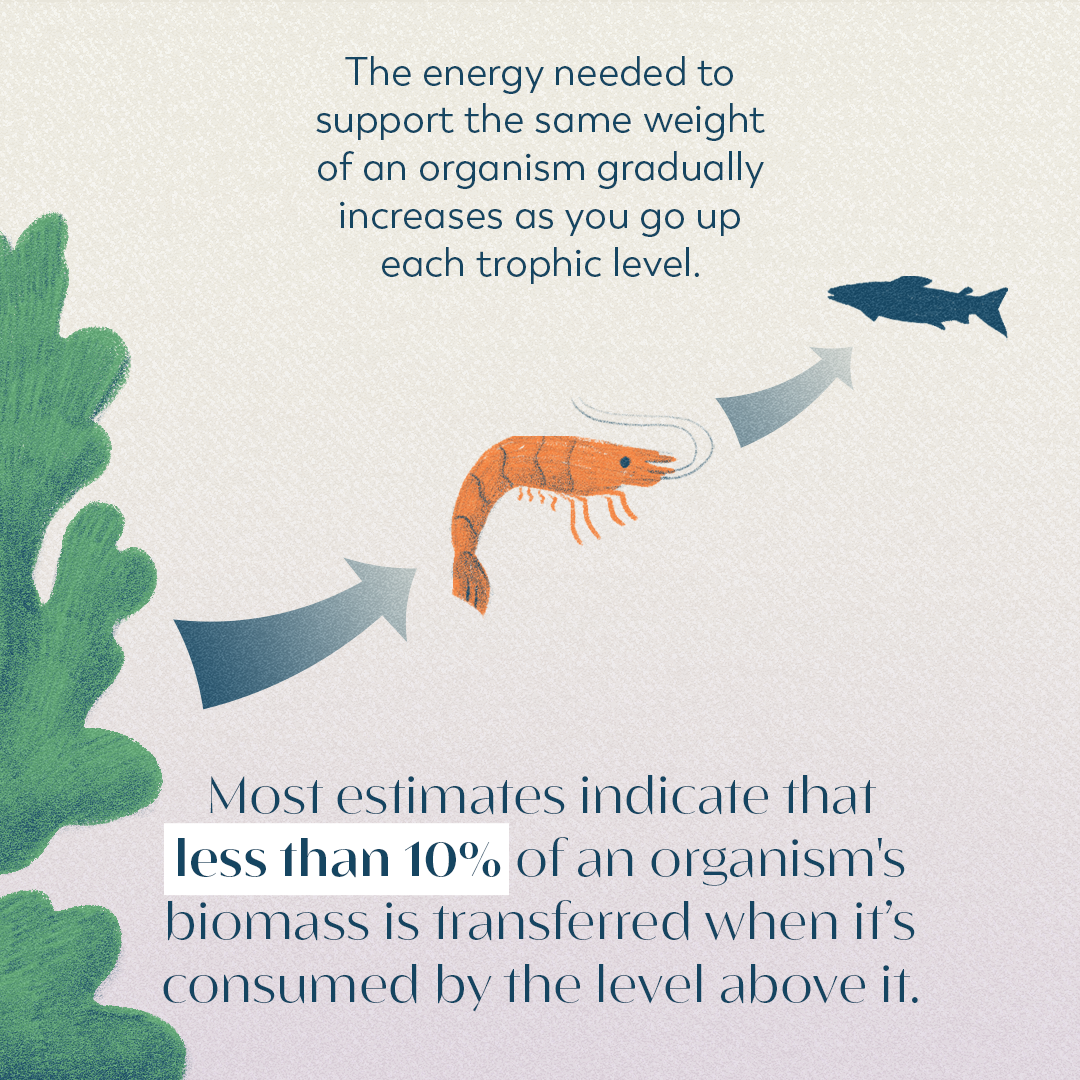 Energy needed to support the same weight of an organism

Which are the benefits of bivalve and algae farming?

If designed correctly, both bivalve and algae farms can actually positively impact the environment around them – all while producing nutritious foods.[9]

For small producers and lower-income regions, it provides a real low-input, low-cost and sustainable route towards improved food security and livelihoods. It’s also a good differentiation strategy. Monoculture food production systems – whether on land or at sea – are a high-risk, high-reward business. They leave producers incredibly vulnerable especially as uncertainty around climate change continues to mount.

Low-trophic species can also offer aquaculture producers new ways to turn waste back into useful materials. Integrated-Multi-Trophic Aquaculture or IMTA – a concept dating back to 2100 BCE in China – involves the joint farming of species from different trophic levels that are ‘ecologically complementary’.[14] For example, seaweed and shellfish could be grown mutually alongside salmon farms, feeding off nutrients produced by the salmon.

While doing so, the seaweed would be filtering the surrounding water to provide a cleaner environment for salmon to thrive in and add to biodiversity in the area – a true win-win.

Why are low trophic species’ and IMTA’s farms still rare?

These are some reasons: