In this step, Prof Davidson explores the relationshop between HABs and human health
© SAMS

Phytoplankton is the collective name for free-floating microscopic marine organisms that are found throughout the world’s lakes and oceans.

Although microscopic in size, phytoplankton underpins all life on earth: these tiny creatures are the base of the marine food chain, and the productivity of lakes, seas, and oceans depends on them.

Through their photosynthesis, converting the sun’s energy into organic biomass, they play a crucial part in the global carbon cycle. These microbes are thought to compose less than 1% of the photosynthetic biomass of the Earth, but are responsible for approximately half of annual global net fixation of carbon from the atmosphere.[3] Aggregations of phytoplankton can be so large they can sometimes be seen from space [Fig 1]. Phytoplankton can be taxonomically grouped into three functional categories or “life-forms”: diatoms, dinoflagellates, and microflagellates. 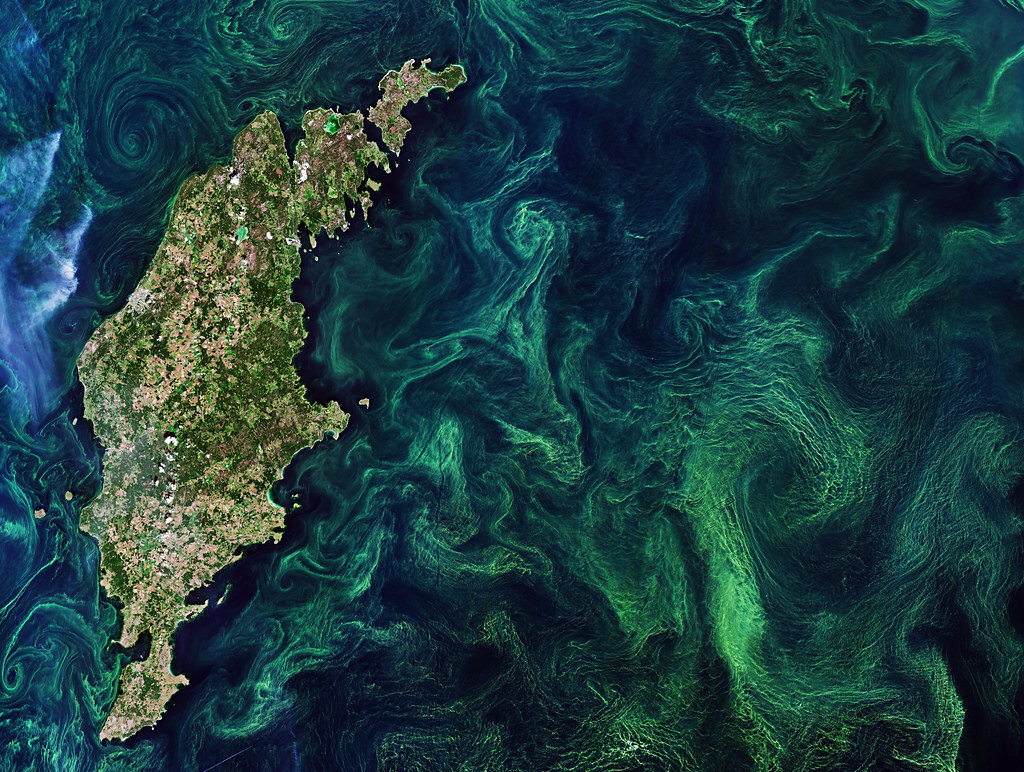 There are many thousands of different species of phytoplankton within these three life forms[11] and most of these are benign. Unfortunately, a small number of phytoplankton taxa are harmful to humans or our use of the aquatic ecosystem [5], we refer to these organisms as “Harmful Algae” with the term “Harmful Algal Bloom” or “HABs” being used to characterise increases in their abundance. In this article, we’ll discuss some of the important marine HAB taxa, why they are harmful, and what environmental conditions their appearance.

*Photosynthesis: The process by which some organisms harvest the sun’s energy to synthesise biomass from carbon dioxide and water.

*Dinoflagellates and microflagellates: A taxonomically and nutritionally diverse group of small aquatic organisms.

What are HABs’ effects?

HABs can be harmful for a range of different reasons, some of the most important ones relate to aquaculture and food:

As we explored in the previous step, shellfish production is an important industry in many maritime countries, providing both healthy food and important economic support for remote families and small businesses in rural coastal areas where the industry is typically located. A wide range of shellfish are cultivated globally. In Scotland, by far the most common product is mussels (Mytilus edulis) [Fig 2], which are grown on ropes that hang into the water from floating buoys [Fig 3]. Mussel larvae settle onto these ropes and are allowed to grow to maturity and harvest.

Some phytoplankton taxa produce natural biotoxins. In a single cell, or even in a particular body of water, the concentration of toxins can be quite low. However, filter-feeding shellfish such as mussels (and other commercial taxa such as oysters and scallops) ingest the phytoplankton and concentrate the toxins within their flesh. The shellfish are not harmed, but the toxins can cause illness in humans or other consumers. Shellfish toxins are heat stable and hence are not destroyed by cooking.

Different HAB taxa produce different toxins with a range of potency and health impacts. Some toxins generate only (unpleasant) gastrointestinal symptoms while others may even cause fatality.[1]

One particularly hazardous HAB comes from Alexandrium, which is responsible for the production of a toxin capable of causing human mortality through paralytic shellfish poisoning (PSP) if ingested in high enough concentration. Alexandrium cells can be highly toxic and only a few cells per litre of seawater can be enough to generate shellfish toxicity. Alexandrium has a complex life cycle including a phase when the cells form resting cysts* in the sediment of the sea floor. When conditions are right, the cells escape and return to the surface waters. Alexandrium blooms are therefore quite sporadic and difficult to predict.

The widely distributed diarrhetic shellfish poisoning (DSP) HAB of the genus Dinophysis is also of significant concern. Dinophysis’ toxicity is not as acute as Alexandrium and hence does not cause human mortality, but its toxins still cause very unpleasant “diarrhetic shellfish poisoning” (DSP) gastrointestinal symptoms. Blooms of Dinophysis can have a significant economic impact on aquaculture as shellfish harvesting closures are imposed when they occur.[9]

The genus Pseudo-nitzschia also contains a number of toxic species. The toxin from these organisms (domoic acid) can result in Amnesic Shellfish poisoning (ASP). This syndrome was first discovered in Canada in the late 1980s and is now found in many regions of the world.

*Cyst: a dormant phase in a cells life cycle.

Toxins are produced by the benthic phytoplankton genus Gambierdiscus that is sometimes found on and around coral reefs. CFP is more of an issue for wild fisheries than aquaculture, as these cells are eaten by small herbivorous fish allowing the toxins to pass into and upward in the food chain to the larger carnivorous fish that humans eat. Symptoms of CFP can be wide-ranging, serious, and long-lasting.

Why do HABs occur?

The word phytoplankton derives from the Greek phyton (plant) and planktos (wandering) because these free-floating organisms are transported within waterbodies by tides and currents. Populations are therefore dynamic and not fixed in time and space.

To grow, all photosynthetic phytoplankton require light, nutrients (such as nitrate and phosphate), and the appropriate physical conditions. Phytoplankton grow through division, doubling in numbers as fast as once a day. Hence under favourable conditions the abundance of phytoplankton as a whole, or of one or more harmful species, can increase rapidly forming a “bloom”.

In temperate-latitude seas, the onset and duration of the phytoplankton growth season is controlled by the availability of light. This generates a pronounced seasonality.

Over winter there is insufficient light to fuel growth. However, in spring increased daylight combined with the availability of dissolved inorganic nutrients that have built up in the water column* over winter generates the “spring bloom”. This event is dominated by diatoms which, as noted above may be harmful to fish, primarily through gill damage.

As the year progresses, nutrient concentrations in the water diminish and dinoflagellates and microflagellates become more established with incidences of shellfish toxicity becoming more frequent in the summer months. As day length shortens in the autumn and winter, storms begin to mix cells out of the sunlit upper layers of the water column, and the risk from HABs diminishes.

In other regions of the world, differences in the light climate and nutrient regimes result in different cycles of phytoplankton growth with much less pronounced seasonality in more tropical waters. Other coastal regions (e.g. north western USA and Peru) are naturally nutrient-enriched and productive as a consequence of upwelling, a process whereby deeper nutrient-rich water is entrained into surface illuminated waters. These different environmental factors generate region-specific HAB dynamics.

Within these general seasonal trends, the particular phytoplankton species that are present can be very variable and it is very difficult to predict whether the phytoplankton in any one location will be harmful at any particular time. This is likely because both harmful and benign species exist within a complex “microbial food web” with multiple competitors and grazers.

*Water column: A conceptual column of water that stretches from the surface to the floor of a body of water, such as sea, lake, etc.

For many years it was thought that the size and frequency of HABs were increasing. The role of climate change in governing HABs is clear[12] with varying local or regional trends, but analyses of global data sets have demonstrated that the frequency of HABs on a global scale has remained constant over the period 1985-2018 with the perceived increase being related to increased monitoring.[8]

In some regions, particularly when the affected water body has restricted exchange with the wider ocean, a link between anthropogenic nutrients and the high biomass HABs that typically harm farmed fish can be found, for example the Seto Inland Sea in Japan.

But in other locations, such as the fjordic sea lochs of the Scottish west coast scientists have not found a link between anthropogenic nutrients and HABs, and it is thought that blooms in these locations are primarily natural events governed by physical and biological interactions within the water column.[7]

Such blooms can often be transported large distances on oceanographic currents, developing offshore but being advected to the coast.

*Advected: Transfer (heat or matter) by the flow of a fluid, especially horizontally in the sea.