In this article, we'll take a look at how car clubs will likely evolve up to 2030.

It is important to understand the future landscape of the transport network in order to inform the decisions made today.

Though forecasting technology developments is not an exact science, there are clear indicators today that help inform the likely trends of future shared mobility transport.

Through understanding the timeline for technology advances and changes in operation, cities can ensure any policies and strategies devised are sustainable for the long term.

The roadmap below displays an indication of the likely route car clubs may take through to 2030 with the text below explaining the likely reason for these changes. These roadmaps were developed through the Climate-KIC funded project SuSMo investigating sustainable and shared mobility throughout Europe creating tools for cities to accelerate the uptake of shared mobility. Use the related links to find out more about the SuSMo project. 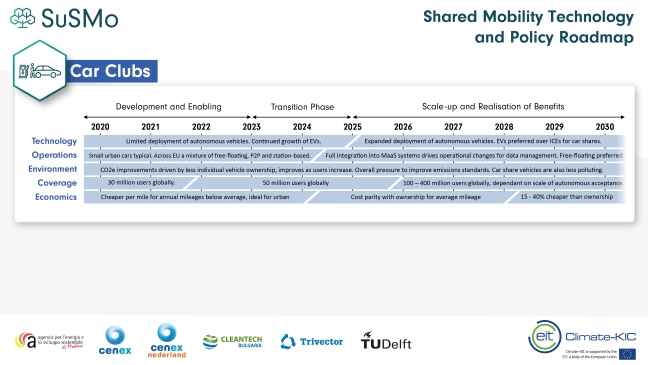 The technological development of car clubs will focus on two main developments, electrification, and autonomous vehicles.

The electrification of car clubs will be driven by the operational cost savings electric vehicles (EVs) have over internal combustion engine (ICE) vehicles. Cost parity for new vehicles will be reached by around 2025. However, it should be noted that over the life of a vehicle, EVs are already cheaper than ICEs due to their lower fuel and maintenance costs. Beyond 2025, the increased availability of EVs and increasing cost reductions due to economies of scale will likely accelerate EV adoption within car clubs. This adoption will be helped by popular strategies adopted by municipalities to combat climate change, such as ultra-low emissions zones and increasing vehicle emissions standards.

Prior to 2025, the level of autonomy seen in vehicles will be relatively low and limited to technologies such as lane-assist and automated cruise control. Towards the end of the decade, as autonomous technology continues to develop, early adopters of these technologies are likely to deploy vehicles within urban environments as part of a car club or taxi fleet. The economic case of removing a driver and the ability of autonomous vehicles to solve the relocation problem within certain car share models makes its use highly desirable for car clubs.

From 2025 onwards, Mobility as a Service (MaaS) systems may begin to appear throughout UK and EU cities and car clubs will be a part of this. This will help to link multiple forms of transport up into one simple payment per journey through a single app, or ticket. One of the primary advances will be a change in the management of data and its exploitation to improve the transport systems of cities.

Several factors will put pressure on car clubs to reduce the emissions of vehicles selected for use within their fleets. These being low emissions zones, congestion zones, financial incentives to choose low-emission vehicles and preferential initiatives, such as parking for zero-emission vehicles. Additionally, the operational benefits of using EVs, alongside the high utilisation rate of car club vehicles will result in car clubs having lower emissions per kilometre than individually owned car trips. As the EV industry progresses, improvements in manufacturing and recycling will see intrinsic emissions reduced, whilst the decarbonising of energy grids will see continued operational reductions in emissions.

Projections for ridership numbers vary wildly based on a number of drivers or barriers that could advance or hinder car clubs. Thirty million users are likely to be using car clubs by 2022, with a steady rate of growth, mainly in urban environments, seeing global car club users reaching fifty million by 2025/26. This steady rate of growth, if maintained, will see 100 million users by 2030. However, this steady rate of growth assumes that societal and regulatory barriers limit the acceptance of autonomous vehicles, and assume that no change in societal norms occur, such as any long-term impacts from Covid-19 that may limit shared vehicle acceptance.

Car clubs in certain locations today can be cheaper than car ownership. In London for example, an individual that travels less than 2,000 miles per year will save money by avoiding car ownership and joining a car club instead. However, 2,000 miles per year is much less than the annual average of 10,000 miles. Until 2024, it is expected that car clubs will only be cheaper or comparable to ownership in the event that an individual travels less than the average national mileage per year. However, by the middle of the decade it is likely that an average user (travelling 10,000 miles) may also see annual cost savings as operator costs reduce, including from reduced capital cost of EVs, and this is passed on to the user.

How does the roadmap align with what you discussed in the previous step? Was anything surprising to you about the likely development of car clubs?