Through this article, Prof. Christa Tobler outlines the disparate institutional system of the present Swiss–EU bilateral or sectoral law.
© University of Basel

The present article deals with certain aspects of the institutional system of the Swiss–EU agreements that led the EU to suggest changes. As a starting point, it must be remembered that the system as a whole has developed over time. There are now many agreements and it is perhaps no wonder that they reflect different approaches to issues such as the development of the law, its interpretation and the settlement of disputes. Indeed, it would be surprising if an agreement of the 1970s and an agreement of 2004 were to provide for the same approach in this respect. Our first message is, therefore, that institutional rules in the various agreements are of a rather disparate nature.

Interpretation of the bilateral agreements

With respect to interpretation, the general rule is that of Art. 31 of the Vienna Treaty Convention of 1969, according to which ‘a treaty shall be interpreted in good faith in accordance with the ordinary meaning to be given to the terms of the treaty in their context and in the light of its object and purpose’.

In addition to this, two bilateral agreements contain specific interpretation rules, namely the Air Transport Agreement (Art. 1) and the Free Movement of Persons Agreement (Art. 16(1)). Both provide that insofar as their provisions are identical in substance to corresponding rules of the Union, they must be interpreted in conformity with the relevant decisions of the Court of Justice of the European Union (CJEU) given prior to the date of signature of the agreement in question. For the Agreement on the Free Movement of Persons, the Swiss Federal Supreme Court has decided that, in principle, a parallel application is called for even beyond the date of signature of the agreement (BGE 136 II 5). For the Air Transport Agreement, there is no corresponding case law (yet) – apparently because no case so far has raised this issue.

With respect to the settlement of disagreements between the parties, the general rule is that the relevant Mixed/Joint Committee is in charge. These Committees are bodies in charge of monitoring the functioning of the agreements. Both the European Union (EU) side and the Swiss side are represented in that framework. The problem is that here a dispute can get stuck, as happened with the 8-day rule. It is therefore possible that, over a prolonged time, the parties get no further than ‘to agree to disagree’. Notably, the agreements do not provide for a judicial element that would allow for the settlement of the dispute before a court.

The only exception is the Air Transport Agreement. Under its rules, the European Commission and the Court of Justice of the European Union (CJEU) are in charge for certain types of issues. A few years ago, this became relevant in a dispute between Switzerland and Germany relating to German rules on the reduction of noise caused by airplanes taking off from, and landing in, Zurich Airport. 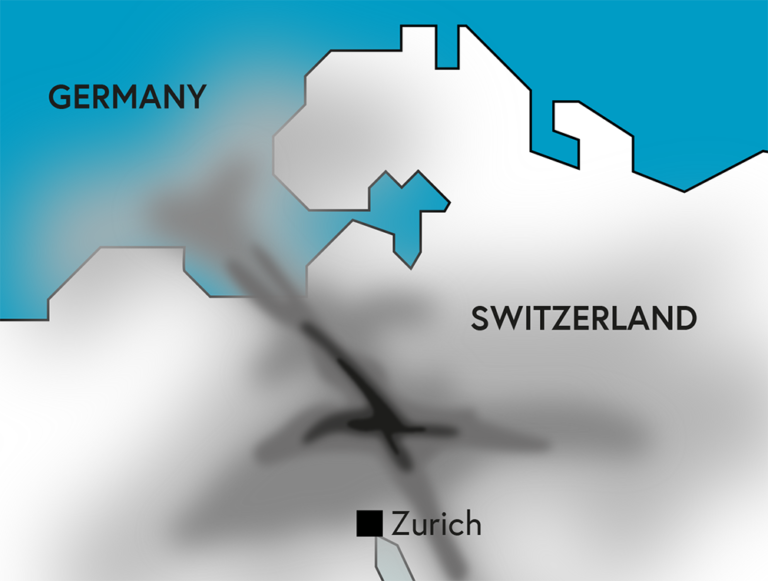 A map that shows the strong traffic of airplanes around Zurich

This case first led to a decision by the Commission and then, when Switzerland disagreed with it, to decisions by two levels of the Court of Justice. [1]

Different from EU law and European Economic Association (EEA) law, the Swiss–EU Agreements do not provide for a mechanism of independent international supervision with administrative and judicial procedures. In other words, under the agreements there is no international body with the power to investigate breaches of the parties’ obligations and to take a State Party to an international court over this issue.

Development of the law

Finally, international agreements are not set in stone. Rather, they can be changed through a procedure that is usually described in the relevant agreement itself. That in itself is not a ‘difficult’ issue. However particular questions arise where an agreement provides for the association of a third country to certain EU policies. Should that law develop in parallel with the EU law from which it is derived? In other words, should such agreements be dynamic even in their legal nature?

In the system of the Swiss–EU agreements only the Schengen, Dublin and Customs Agreements are based on the principle that they should be updated regularly, failing which there are legal sanctions. For example, we will see in our next step that a refusal to accept an update to the Schengen Agreement in principle leads to its termination. Note, however, that updating is never automatic but rather requires a decision of Switzerland to that effect.

All other agreements are what is sometimes called static in nature. This does not mean that they cannot be changed or updated. In fact, in the case of some ‘static’ agreements changes happen quite regularly. However, static agreements do not provide for legal sanctions for the case where an update is not accepted by Switzerland.

A note for advanced learners of public international law

The charts in the ‘downloads’ section provide further information about the adaptation and revision of the Swiss–EU agreements as well as about their interpretation and about the role of the Joint/Mixed Committees:

Read the decision of the Court of Justice of the European Union on the German–Swiss dispute on air noise (Case C-547/10 P Swiss Confederation v Commission, ECLI:EU:C:2013:139).