The Anthropocene Epoch is an unofficial unit of geologic time, used to describe the most recent period in Earth’s history when human activity started to have a significant impact on the planet’s climate and ecosystems. National Geographic In this article we will consider how the concept of Time is challenged in the Anthropocene. 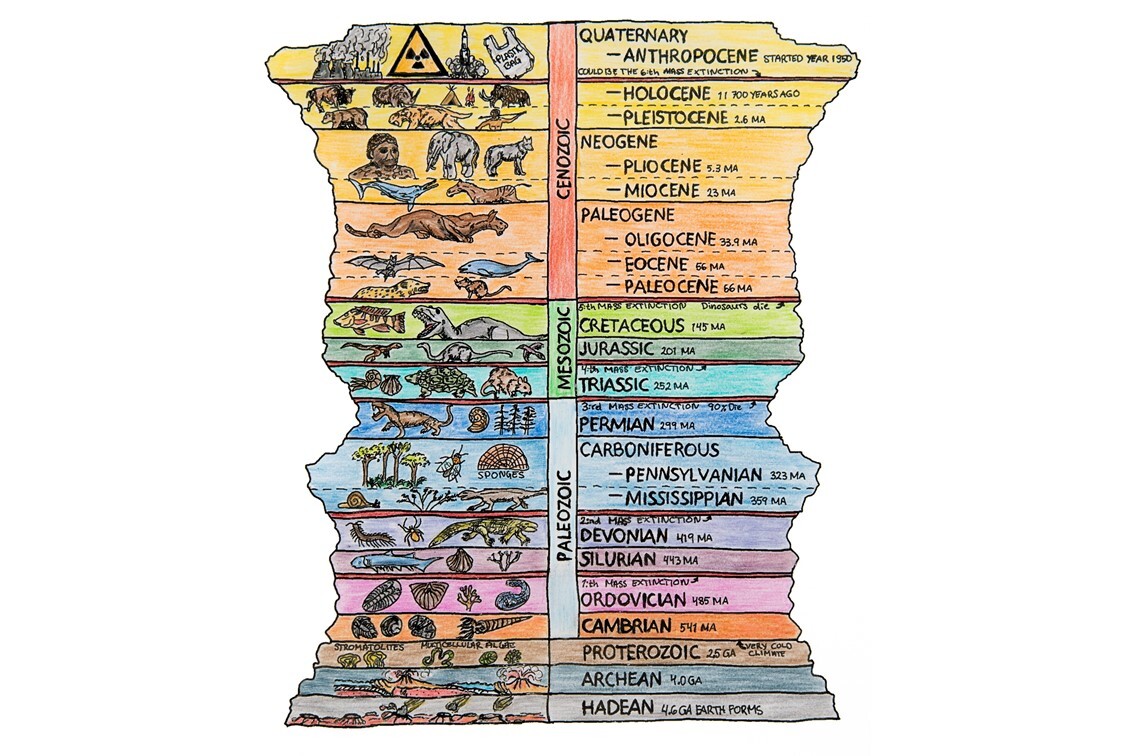 The Anthropocene Epoch is an unofficial unit of geologic time, used to describe the most recent period in Earth’s history when human activity started to have a significant impact on the planet’s climate and ecosystems. National Geographic


In this article we will consider how the concept of Time is challenged in the Anthropocene.

Based on biblical narratives, Bishop James Ussher calculated that the Earth was created in 4004 BC. However, observations in geological studies contradicted this. James Hutton’s observations of exposed strata on the coast of Scotland supported his proposition that the planet was much older. In fact, it is over 4.5 billion years old. The span of humanity within this vast history of the Earth is relatively short, making it hard to grasp the place of this species within this geological ‘deep time’. In order to take on the climate crisis, we need to familiarize ourselves with not only deep time, but also the relationship between time, materiality and relations between generations.

This content is taken from
Stockholm University online course,

The Anthropocene Epoch is the suggested name for the time we live in, a time when human action makes a significant mark in the geological record and humans wield sufficient power to change the climate. For example, human agency has the force to affect when the next glacial period will occur.

Geologists place the Anthropocene Epoch after the Holocene and Pleistocene Epochs of the Quaternary Period. This period is a division of the Cenozoic Era which belongs to the Phanerozoic Eon. The terms “Epoch”, “Period”, “Era” and “Eon” describe divisions of geological time, from the shortest (epochs) to the longest (eons).

Archaeologists work with periods such as the Stone, Bronze and Iron Ages that describe human activities on the planet based on the main material traces that are recognized to derive from human action during that particular interval of time.

The Nature of Time

This time reckoning is linear. However, for both archaeologists and geologists, time is not only envisaged as linear. Time is very much material and present under our feet. Likewise, climate change is a materializing process where the interaction between several human generations and the materiality of the planet are co-working in actions that will have effects over long periods of time. Hence, the actions in one period of time will keep affecting the action possibilities in later times. In particular, present day human actions, such as unsustainable consumption and the burning of fossil fuels has affects over deep time.

“Although I have for some time accepted the force of Fredric Jameson’s dictum that ‘we cannot, not periodize,’ until very recently it would not have occurred to me that postcolonial study, critical theory, or the humanities disciplines in general needed to periodize in relation not only to capital but to carbon, not only in modernities and post-modernities but in parts-per-million, not only in dates, but in degrees Celsius.”

If one, inspired by Baucom, understands time as more material, this means that there is a need to see how material processes from the past, disregard its time of origin and interfinger with the present. Furthermore, present day material configurations will last into deep futures and demand attention well beyond the life-times of their makers.

Climate change territorializes deep time futures for multiple emerging generations. Hence, time in climate challenged societies needs to be conceived differently, first as more material and secondly as a relationship set up with future generations. Following on from this, human history cannot continue to be written without paying close attention to how it interlinks with natural history.

This article draws from the following works:

Fredengren, C. & Åsberg, C. 2020. Checking in with Deep Time. In Harrison, R. & Sterling, C. (eds) Deterritorializing the Future: Heritage in, of and after the Anthropocene. London, UK: Open Humanities Press.

This content is taken from Stockholm University online course