In this article, Paddy Upton discusses the difference between debate and dialogue. 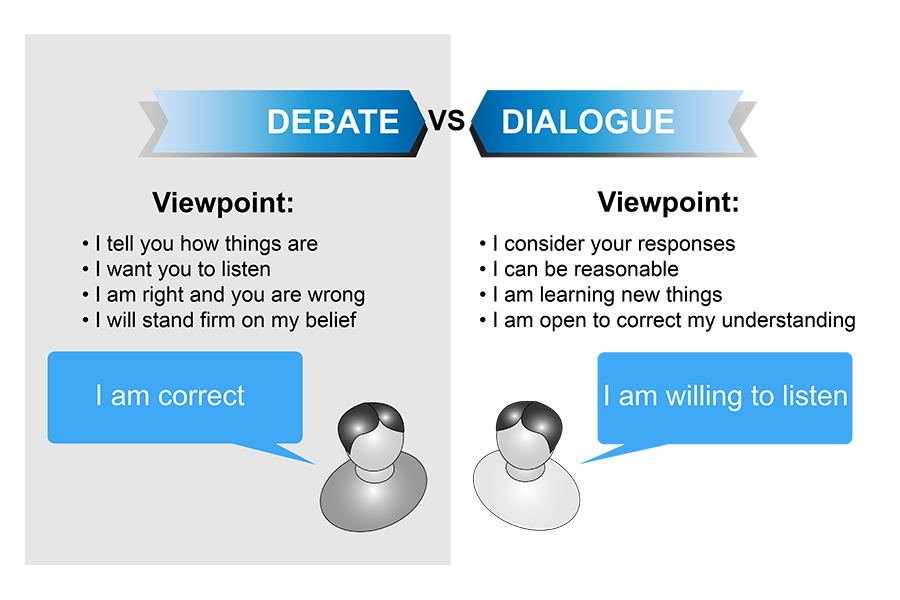 Key statement: You can fight to win and one of you wins, or you can work together to win and both of you win.

In order to advance from storming to norming, conflict needs to be successfully navigated: from ‘you vs me’ to ‘us vs the problem’.

A useful way of framing this is to differentiate between ‘debate’ and ‘dialogue’, illustrated above.

While there are more than two ways to communicate, many coaches have either a debate or dialogue mindset.

A debate mindset tends to see communication as a one-way process. The coach tells athletes what they know and defends their own point of view. The aim of debate is to win and so debaters will work towards convincing others of their point or argument and tend not to budge in their thinking.

A dialogue mindset sees communication as a two-way process: listening to others and seeking to understand others’ ideas and perspectives is just as important as talking about their own.

The coach who takes a dialogic approach doesn’t see communication as win-lose and so doesn’t feel the need to defend their own ideas or perspectives, rather they are keen to learn from others and curious about others way of thinking and being in the world.

Consider explicitly naming up the debate and dialogue mindsets and at the beginning of team meetings write this up whenever the team needs to address a sensitive topic.

Ask team members to monitor the conversation and do what they can to ensure it remains in ‘dialogue’ mode, which gives the best chance of successfully navigating conflict. This happens naturally in ‘performing’ teams.

As coach, in communication with your team, where is your immediate growth point?