Biology toolbox: The role of microbes in the nitrogen cycle

What is the nitrogen cycle?

There are four key stages of the nitrogen cycle:

Bacteria, including symbionts, are vital at all stages. 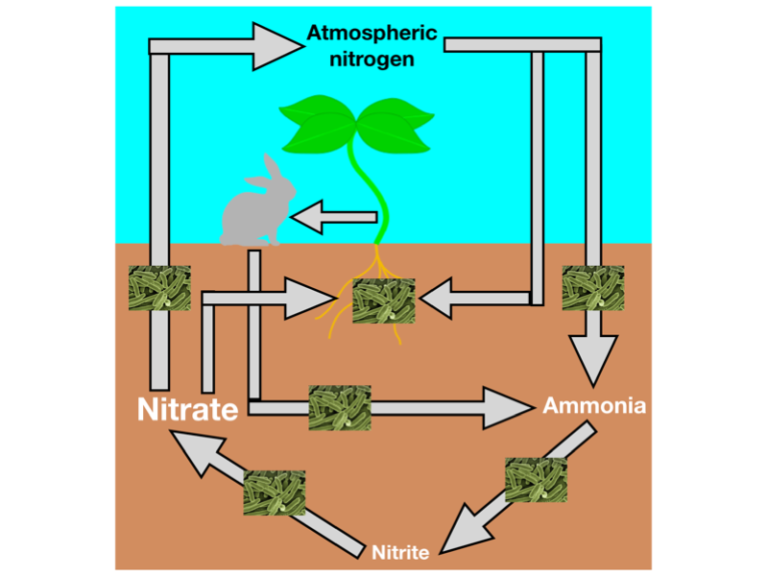 Figure 1. The nitrogen cycle. Gaseous nitrogen from the atmosphere is fixed into ammonia and then converted to nitrate, a usable form of nitrogen for plants. Ammonia is also formed via the decomposition of plants and animals. Bacteria are involved at all stages of the nitrogen cycle.

During nitrogen fixation, atmospheric nitrogen is converted into nitrates and nitrites. Plants cannot use atmospheric nitrogen until it has been fixed. The majority of nitrogen fixation is performed by bacteria, either free-living (e.g. Azotobacter) or symbiotic (e.g. Rhizobium). These bacteria live in the root nodules of legumes, including beans and peas. They express a nitrogenase enzyme that combines the gaseous, atmospheric nitrogen with hydrogen to produce ammonia. Ammonia is a useful biological molecule as it is an essential part of molecules such as amino acids. The bacteria receive carbohydrates from the legumes in return for the production of ammonia. This is therefore a mutualistic symbiotic relationship. Nitrogen can also be fixed artificially on an industrial scale. This is called the Haber Process and today it is mainly used to make fertiliser. The Haber Process combines atmospheric nitrogen with hydrogen from natural gas, producing ammonia. It involves an iron catalyst to increase efficiency and 200 atmospheres’ pressure.

Ammonia can be also be produced directly by the decomposition of plants and animals, or via the production of waste by animals. This decomposition forms organic nitrogen, which is then converted by bacteria (either aerobic or anaerobic) and fungi into ammonia. This process involves three enzymes:

Nitrification is the process by which ammonium is converted into nitrite, and then to nitrate. The first step is the conversion of ammonium to nitrite. This is performed by different species of bacteria including Nitrosomonas. These bacteria are widespread in soil, and use electrons from ammonia to generate energy. Species such as Nitrobacter perform the second nitrification step, converting nitrite in the soil into nitrate. Nitrobacter is an obligate aerobe, meaning it needs oxygen to survive.

Denitrification completes the nitrogen cycle. Here, nitrate is converted back into nitrogen gas. This stage of the nitrogen cycle is anaerobic, meaning it is performed in the absence of oxygen. When soils become waterlogged, the amount of oxygen available in the soil decreases. This allows denitrification to occur, catalysed by facultative anaerobic bacteria. Facultative anaerobes can respire aerobically but also use anaerobic respiration when there is no oxygen available. Pseudomonas aeruginosa is one such species of denitrifying bacteria. Denitrification reduces the amount of biologically accessible nitrogen available to the plants.

You will learn about how the nitrogen cycle is important in an agricultural setting during Beasts week!