Find out more
Home / Healthcare & Medicine / Biology & Biotechnology / The Genomics Era: the Future of Genetics in Medicine / What is the Epigenome?

What is the Epigenome?

Derived from the Greek “epi” meaning “above”, the epigenome describes modifications to the genome that do not affect the DNA sequence but determine whether genes are switched on or off where and when they are needed.
© St George’s, University of London

Derived from the Greek “epi” meaning “above”, the epigenome describes modifications to the genome that do not affect the DNA sequence but determine whether genes are switched on or off where and when they are needed.

If the genome is analogous to the script of a play, the epigenome is the interpretation of the play by the director and actors.

Two components of the epigenome are DNA modification and chromatin remodeling.

DNA modification describes the addition of chemical compounds to the DNA bases. Methylation of DNA is the commonest modification.

Methylation at the start of a gene usually switches the gene off. Chromatin remodeling describes how changes to the structure of DNA can affect gene expression.

The DNA is wound around histones in order that it can be packaged efficiently into the nucleus as chromosomes. Gene expression can depend on how tightly the DNA is bound to the histones: when it is loosely bound genes are accessible to transcription factors and can be expressed but if it is tightly bound transcription cannot occur.

The tightness of the histone/DNA binding is determined by chemical modifications (again methylation amongst others) that occur to “tails” that protrude from the histone molecule. 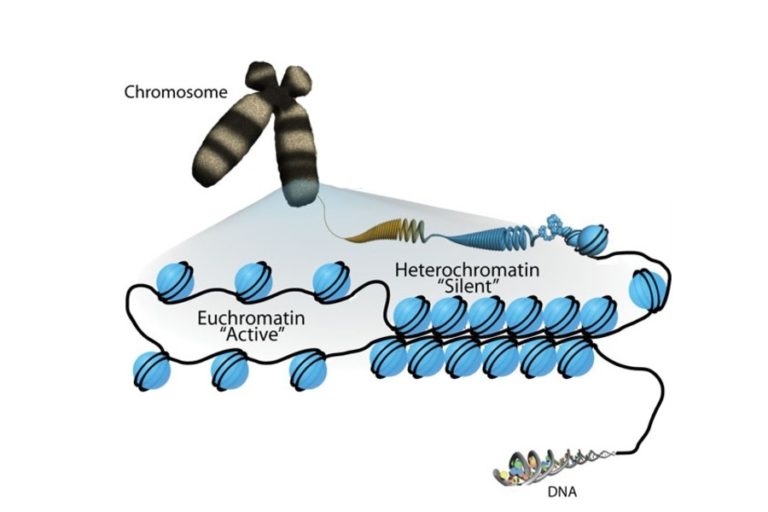 The epigenome is dynamic and responsive to external stimuli. It is believed that certain external stimuli can cause abnormal DNA modifications which, in turn, disrupts normal gene expression.

For instance, we now know that a defective epigenome can contribute, along with genomic mutations, to the development of cancer.

A different group of disorders that arise from abnormalities of the epigenome are the imprinting disorders. Imprinting is an epigenomic phenomenon whereby certain genes are expressed depending upon their parent-of-origin, i.e. whether a gene is “switched on” or “switched off” depends on whether it was inherited from your mother or your father.

In certain regions of the genome, there is a clustering of imprinted genes which are regulated by imprinting control centres.

Epigenomics is a growing field and one, about which, we still know relatively little.

However, the study of the epigenome is a rapidly expanding area and, like our burgeoning knowledge of the genome, our increasing ability to interpret the epigenome is likely to transform our ability to both diagnose and treat rare and common diseases.

A study in mice suggested that a fear response could be passed down from parent to child through heritable epigenetic changes. This is known as “inheritance of parental traumatic exposure” (Dias, B. G. & Ressler, K. J. Nature Neurosci (2013)).

What are your thoughts on what might be the evolutionary advantage of passing on behavioural traits caused by environmental stimuli through generations? What might be the disadvantages of this?