Find out more
Home / Healthcare & Medicine / Biology & Biotechnology / The Genomics Era: the Future of Genetics in Medicine / An Introduction to Mitochondrial Inheritance

An Introduction to Mitochondrial Inheritance

Mitochondria are the ‘batteries’ in each cell which provide their energy. There are many thousands of mitochondria within each cell, especially in muscle and brain. Mitochondria have their own DNA (mtDNA) which encodes 13 of the many proteins used within them.
© St George’s, University of London

Although we often talk about conditions that result from a single mutation in a nuclear gene and follow the autosomal dominant, recessive and X-linked Mendelian inheritance patterns, it is important to realise that there are other causes of genetic disease and other forms of inheritance.

In this step we will consider two alternatives to single nuclear gene disorders:

Most normal traits, such as height and hair colour, are determined by variation at multiple different genes, combined with their interaction with the environment. Within a family, the inheritance pattern for these normal traits is termed ‘multifactorial’.

Our knowledge of the human genome is beginning to provide an understanding of some of the genetic variation which underlies differences in these traits.

Many of the most common health disorders, such as ischaemic heart disease, and diabetes, will usually be caused by the interplay of multiple genetic factors and environmental factors.

These conditions are not likely to follow a simple pattern of inheritance, but rather may show a clustering in a family of several people with the condition. This inheritance pattern is referred to as ‘multifactorial’ or ‘polygenic’ inheritance. 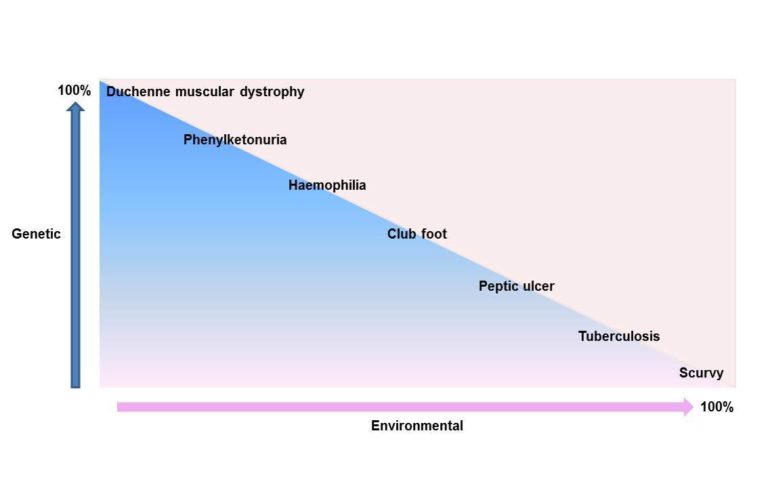 Duchenne muscular dystrophy graph with genetic and environmental as the X and Y axis respectively Click to expand
© St George’s, University of London

Within a family, for multifactorial inheritance, we can rarely accurately estimate the chance that a particular family member will inherit the condition. Genetic information is therefore based on data obtained from observing whole populations.

The condition may tend to affect one sex more often than the other (e.g. congenital dislocation of the hip occurs predominantly in females). Therefore it can be a patient’s age when diagnosed, and whether male or female, as well as the number of affected people in the family, which influences the level of risk for any other member of the family.

One of the main genetic challenges for people or families who have a disorder which normally follows multifactorial inheritance is that in some cases the same phenotype (clinical presentation) may be caused by a mutation in one gene of major effect.

This is the case with breast cancer where the majority of individuals likely develop cancer because of an interplay between a number of low-risk susceptibility loci and the environment, whilst a very small proportion of women have a high risk of developing breast and/or ovarian cancer due to a single alteration within one of the high-risk breast cancer susceptibility genes; BRCA1 and BRCA2.

The ability to recognise a high-risk family from among the many more at the lower multifactorial risk can be difficult and requires having an awareness of those factors which might suggest a higher genetic risk, such as two family members developing the condition at a much younger age than usual.

Mitochondria are the ‘batteries’ in each cell which provide their energy. There are many thousands of mitochondria within each cell, especially in muscle and brain. Mitochondria have their own DNA (mtDNA) which encodes 13 of the many proteins used within them.

The mtDNA is present as a complete circle. Genetic alterations in the mtDNA can occur in the individual genes, or as larger rearrangements of the DNA in the circle.

These can occur at any time in a person’s life, and will usually result in cells having a mixture of normal and altered mtDNA, referred to as heteroplasmy. Some of the mtDNA alterations could be passed on to offspring through the egg, but not in the sperm.

The pattern of inheritance associated with alterations in the mtDNA involves both males and females, but always with the condition passed on through the female line (maternal inheritance).

Since many mitochondria are passed into the egg from the cells in the ovary, all the offspring of an affected woman are at risk of inheriting the condition, depending on the proportion of mutated mitochondria they inherit. An affected male does not pass his mitochondria on to his children, so his children will be unaffected.

The resultant baby will, therefore, have three sets of genetic material: mother and father from the nuclear DNA and then a donor mother from the mitochondrial DNA. Reproductive human cloning is currently illegal but at the beginning of the year, the House of Commons and then the House of Lords approved nuclear genome transfer for mitochondrial disease, taking effect from the end of October 2015.

What are your views about this technique and its use in the treatment of mitochondrial disease?

If you’re interested in learning more about nuclear genome transfer, check out the 3-Person IVF article by the Center for Genetics and Society organisation.