Mary, Queen of Scots remains a relevant muse for contemporary artists across the globe - inspiring painters, sculptors and even drag queens. 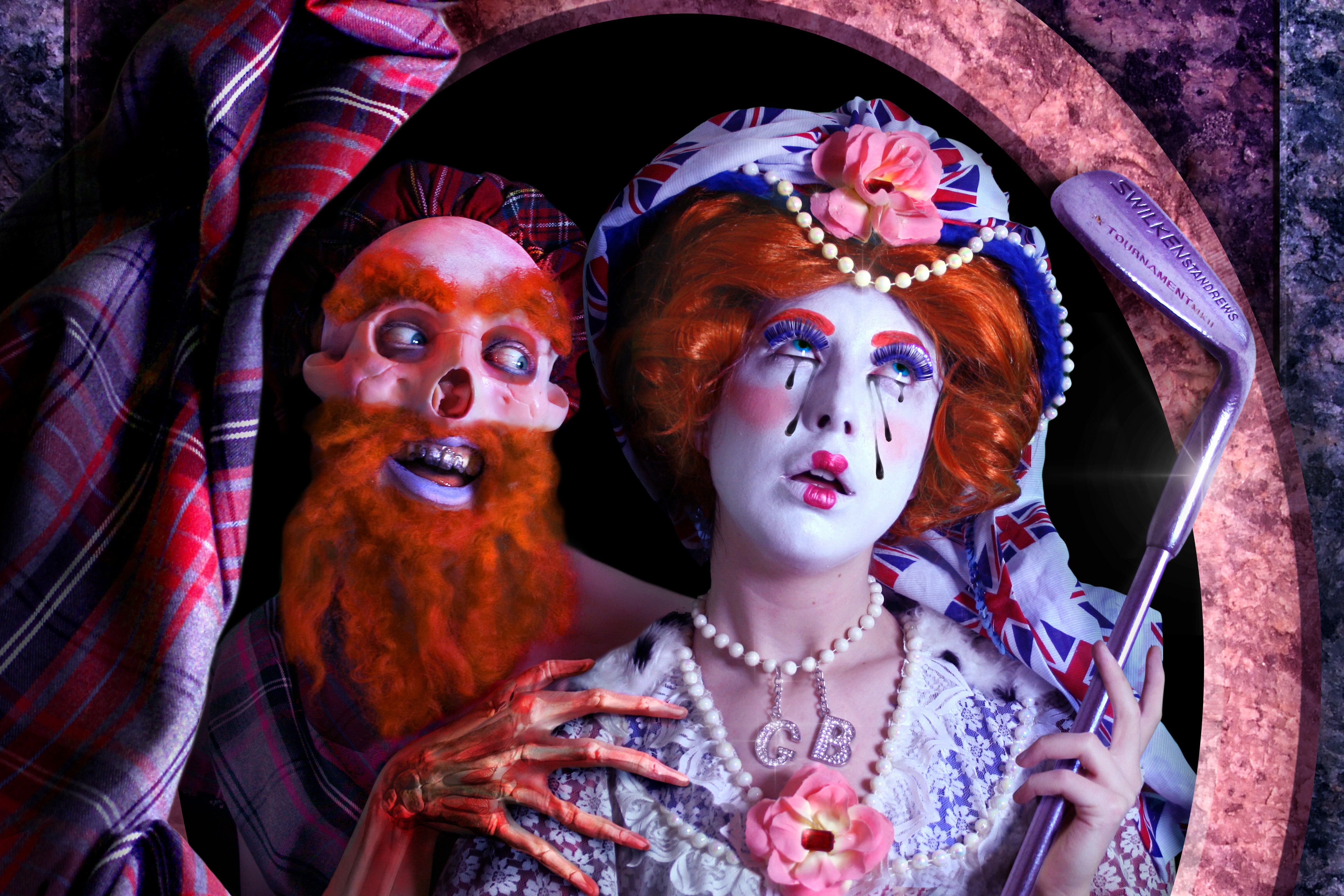 The story of Mary, Queen of Scots has fascinated and inspired since her death in 1587. From writers, poets and painters, to screenwriters, playwrights and even the public – her image lives on in contemporary art of many forms.

Mary Queen of Scots continues to be an important and recognisable historical figure in contemporary culture. So much so that her story has become mythologised, and artists have re-imagined Mary in different ways throughout the 21st century.

One such artist is the Glasgow-based video artist and printmaker Rachel Maclean. In 2013, Maclean used Mary as the inspiration for her digital print The Queen, which was part of the larger series of works commissioned and published by Edinburgh Printmakers and displayed in the ‘I HEART SCOTLAND’ exhibition. The Queen was created in response to the 2014 Scottish Referendum for Independence, and explored both Scottish national identity and the nation’s romantic histories through a contemporary lens.

With an over-the-top, Baroque flair, Maclean (who takes on the role of Mary herself) points to the sense of power and absurdity in representations of Scottish national pride. While her normal cap and ruff are missing, Mary’s’ bright red hair and crucifix make her instantly recognisable in Maclean’s representation. 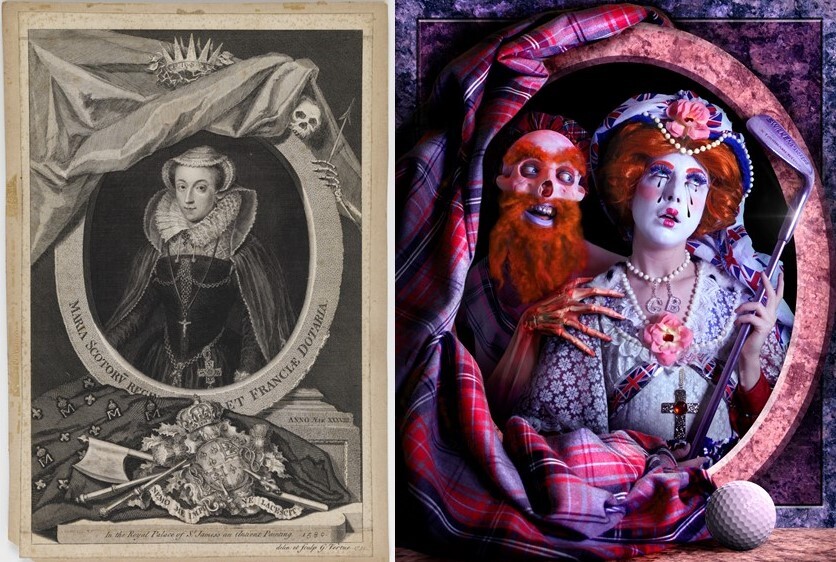 Here we can see a compositional similarity with the seventeenth-century engravings. Mary is contained within the frame, but is now surrounded with the material trappings associated with twenty-first-century Scottish tourist culture – tartan cloth is draped around the frame and a golf ball sits in the foreground. Instead of holding her crucifix (as she does in other representations of Mary as pious Catholic martyr), she now clutches a golf club, perhaps humorously suggesting that golf is the new religion of twenty-first-century Scotland. A grotesque, cadaverous figure sporting a glorious red beard, untamed eyebrows and a tartan Tam O’ Shanter cap has intruded into the frame and gleefully clutches at Mary’s shoulder. There is a dark humour at work in Maclean’s glossy yet kitsch representation of Mary.

Mary’s dress is draped in Union Jacks, a symbol of Great Britain, rather than the Saltire of Scotland. In the video work from which the digital print comes, Mary is ventriloquised, and speaks as Queen Elizabeth II, as if giving her annual televised Christmas message from the library at Traquair House in the Scottish Borders (Mary is rumoured to have spent a night there at some point). She later stands in front of the Bear Gates where, as the story goes, the gate will not be opened until a Stuart monarch claims the crown. Maclean’s Mary is a satirical representation in an age of digital art, which pokes fun at the romanticised myth of Mary within Scottish contemporary culture.

Humour is a recurring theme in contemporary artistic representations of Mary. Just as Maclean takes up the role of Mary herself, so too have other contemporary performance artists. One form of performance art in which Mary has proved a popular source of inspiration is drag. In early 2021, the Scottish-born, New York-based drag queen Rosé took part in the popular TV show, Ru Paul’s Drag Race, and delighted audiences with her Mary Queen of Scots persona. 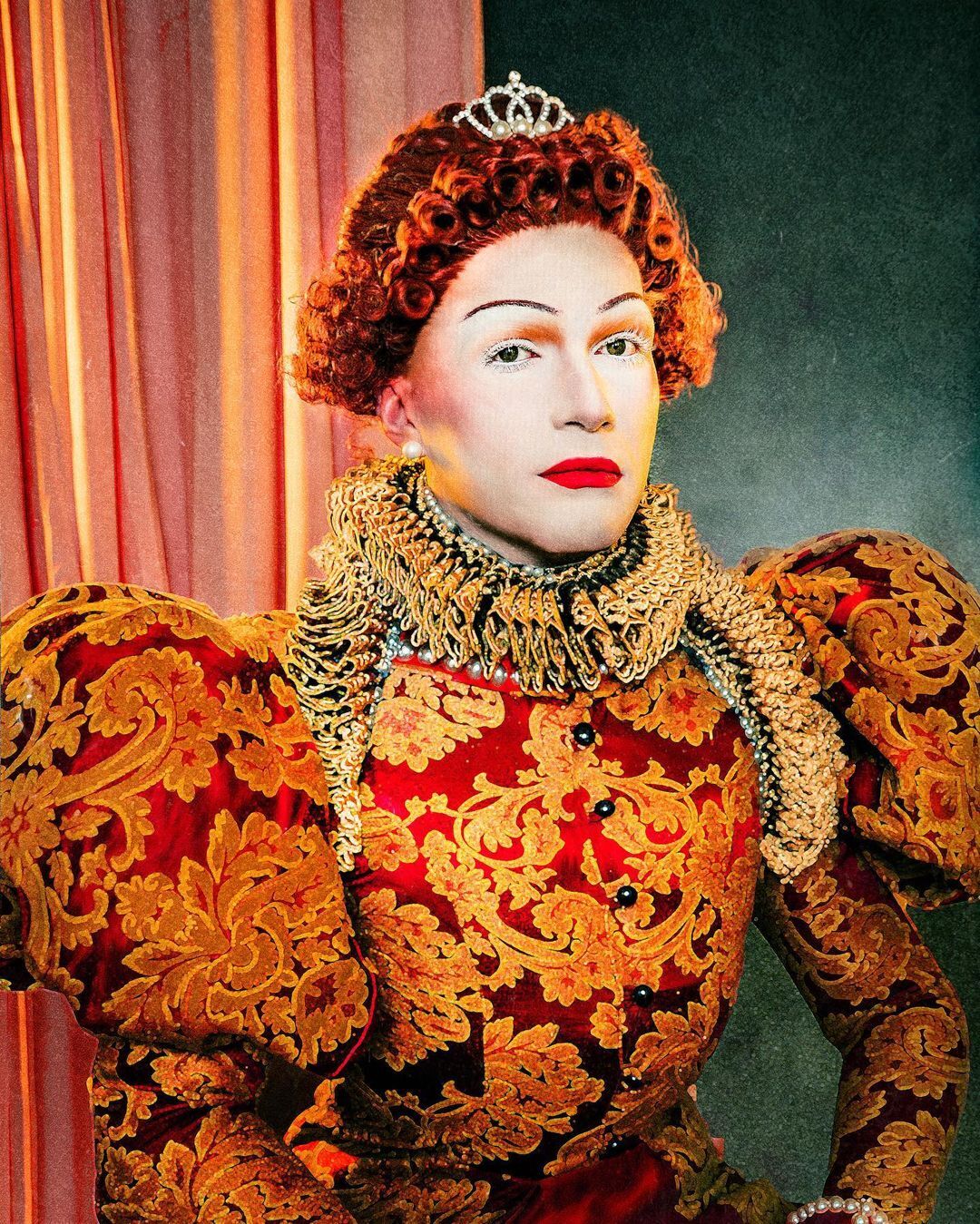 Rosé is the drag name of Ross McCorkell, who was born in Greenock but moved to the US when he was around 10-years-old. Drag is an art-form in which people dress up and perform (often in highly stylised ways) in order to exaggerate gender identity. Drag is ultimately a form of creative and artistic expression, and – as artists in other media have done throughout the ages – drag queens often look to contemporary and historical figures for inspiration. The many different dimensions of Mary and her story – Catholic martyr, tragic queen, Romantic heroine – invite experimentation and opportunities to explore Scottish heritage and identity in different ways.

The most recent series of Drag Race UK saw not one but two Scottish queens take to the stage – Dundee’s Ellie Diamond and Glasgow’s Lawrence Chaney. Chaney, who was recently crowned the winner of Season Two, even introduced herself in the promotional video as “kind of like Mary, Queen of Scots, only I hope one of these English drag queens doesn’t chop off my head”. 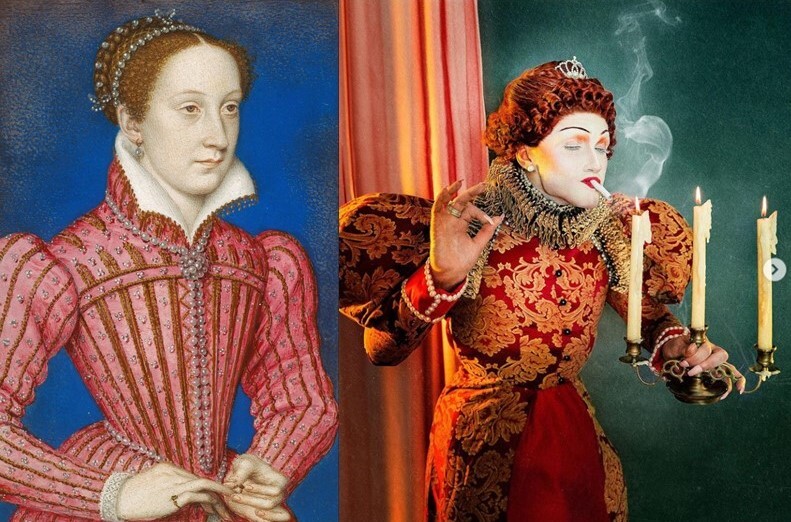 Donning an auburn wig, regal red gown, ruffled collar and chalk-white foundation, Rosé certainly looked the part. The portrayal had a distinctive resemblance to portraits painted of Mary much later in her life, such as the portrait by François Clouet (c.1558). As Daniel Fountain has noted, while Clouet’s portrait includes symbols of marriage and empowerment, such as the subtle touching of the ring on her fourth finger, Rosé took to social media with a range of different props including a leopard-print hip flask, a candelabra to light a cigarette, and a phone to take selfies on: “Performance, pageantry, and pomp are evident in both portraits, despite the hundreds of years’ time difference.” Rosé went on to create video portraits of Mary exploring New York (content warning: Mary has a serious potty mouth in these portrayals).

Most recently, Rosé took inspiration from  Mary, Queen of Scots’ use of fashion and flair immediately before her execution to make a bold last stance. Contemporary accounts tell us that Mary’s ladies in waiting removed her black dress and the queen was left standing in her crimson velvet petticoat, with red sleeves and crimson-brown satin bodice. Antonia Fraser notes that the queen was “thus wearing all red, the colour of blood, and the liturgical colour of martyrdom in the Catholic Church”.

Mary had a flair for the dramatic, and in a recent performance Rosé spectacularly reinterpreted this act of defiance in glamourous and theatrical fashion, with her own “scarlet reveal stunt”. While lip-syncing “off with your head, heads will roll” (by the Yeah Yeah Yeahs), dancers pull apart a black and blue gown with an oversize crucifix to reveal a stunning scarlet dress with a plunging neckline. At this choreographed moment, visual graphics on the stage screen light up with vigorous splashes of bright red blood. Daring, dramatic and diva-ish, Rosé’s performances reinterpret Mary’s last stance for contemporary audiences in a way that is entirely her own.

Just as cheap black and white printed engravings reproduced Mary’s image for people in Europe in the sixteenth and seventeenth centuries, twenty-first-century digital and social media have enabled representations of Mary by contemporary artists such as Rosé and Maclean to spread around the globe. As such, Mary continues to speak to contemporary audiences  and artists continue to take inspiration from the Queen of Scots, just as they have for almost 450 years. 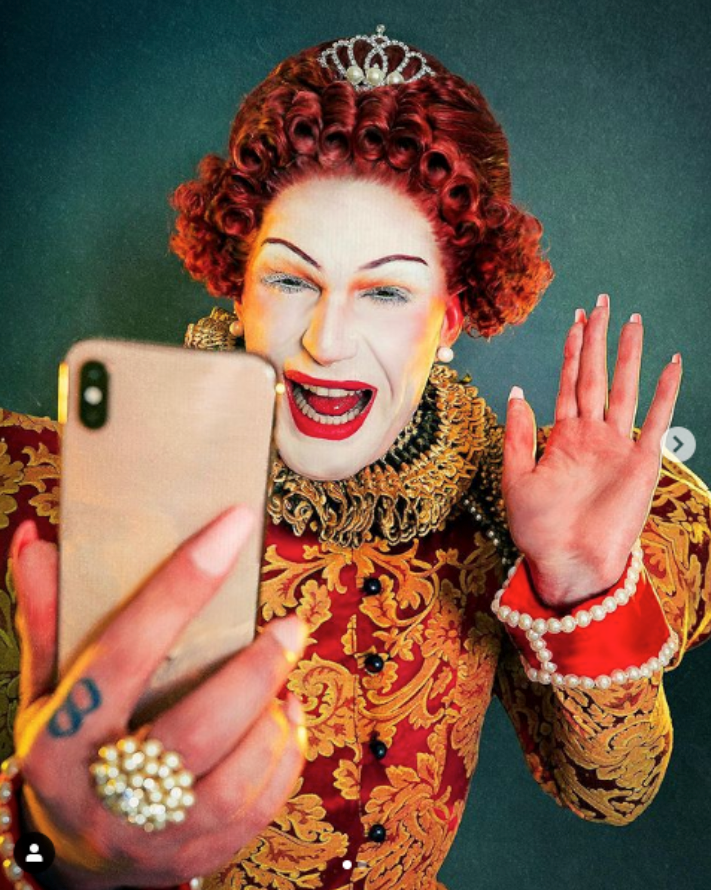