The concept wheel shows how the last four weeks fit together. The final short video reviews the whole four weeks. The chances are that you have developed engineers’ eyes. 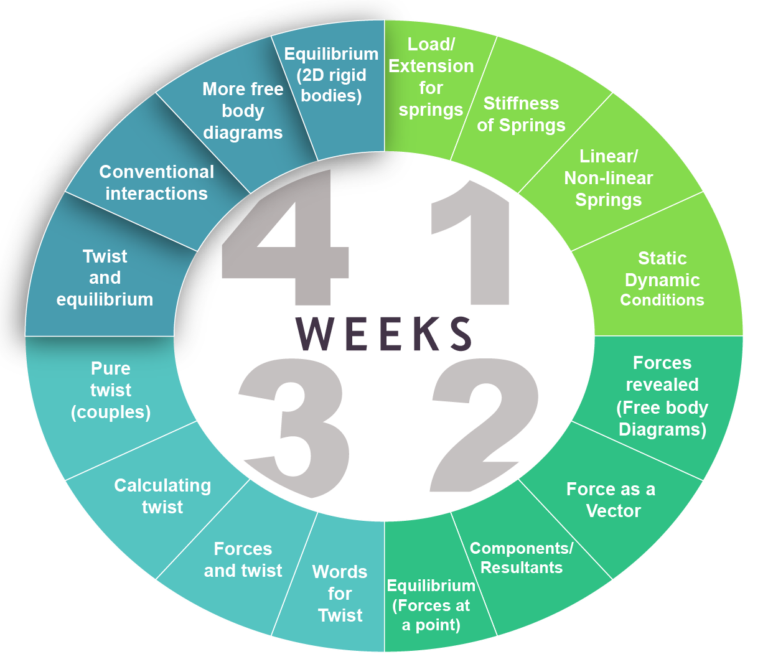 Take your mind back to week two. We used equilibrium (and FBDs of course) to find unknown forces where forces met at a point. We had two equations. That’s useful, but we’ve seen that where forces don’t meet a point two equations aren’t enough, rigid bodies for example.

In this final week, twist gave us an extra equation – taking the sum of moments about a point (more precisely, an axis). This gave us what we needed for finding forces in planar rigid bodies (planar means flat – two-dimensional). And with Newton’s 3rd law we could analyse systems of rigid bodies, such as the washing line in the design task.

It’s ‘two dimensional’, but that needn’t be too much of a limit. With a bit of inventiveness you can often solve 3D problems with 2D analysis; the washing line was 3D, but that wasn’t a problem. You’ve just got to find the way to look at it. This powerful knowledge and skill you can gain from this course is at the heart of the engineering world view.

Don’t forget to share your experiments on the Through Engineers’ Eyes Padlet wall for this week.