Healthcare: How Does Storytelling Support Learning?

In this article we explore the role of storytelling and how powerful it can be when applied to healthcare training
View transcript
9.1
Humans have learned through storytelling since language first evolved. Stories create images in the minds of others, and the better the storytelling, the richer the visual and emotional experience is for the listeners. Good storytellers picture the story in their heads as they tell it. Watch this senior nurse tell a story. Um, but what I thought I’d just like to do is tell you about somebody that I’ve assessed recently who I found collapsed on a trolley. Um, he was complaining of very severe headache. He screwed his eyes up because he was really quite photophobic. He said, ‘I can’t feel my right leg’.
45.2
So, there were things there that made you think, oh, you know he isn’t, a) he isn’t right, but this could be something that’s actually fairly serious. Rather than someone who’s just got a bit of a headache. He was clammy, he was agitated, his eye were tight shut and he was holding his head groaning. And things like that give you an idea that, that is not normal behaviour. That really is not normal for most of us, is it? So, rather than saying, God, I’ve got a banging headache, this guy was really, really bad. He was replaying the experience in his mind. He was seeing and feeling it again as he told the story.
76.8
This method of sharing an experience is rich and lasting. Thirty years ago, I worked in a regional Ambulance Training Centre with a colleague called Bob. Bob was a natural storyteller who could captivate a room with his stories of seriously injured patients he’d looked after. His stories provided such a shared experience, that for some of them, I have difficulty remembering now which were my experiences of looking after patients, and which were Bob’s. Because when he told a story, everyone who was listening looked after that patient too. Really good trainers cultivate this skill. If you have children in your family practice telling them stories. The story content will obviously be different but it’s the same skill.
119.8
You’ll know when you’re telling a story well in a room of learners, you suddenly realise that everyone is giving you their complete attention. Telling a good story has an immersive effect that affects the storyteller too. I’m still unable to tell one of my patient stories from 30 years ago without choking up, because in telling it, it becomes real again. So, if you have a story that affected you emotionally, practice telling it to someone first to make sure you’re able to finish it!

Humans have shared information by means of stories for thousands of years. To this day, stories retain their ability to share an experience, either through the spoken or printed word. Storytelling is a valuable skill for a trainer, because it allows the experiences of both healthcare professionals and patients to be shared in an immersive way.

Well told stories play in our minds like an internal cinema. The teller imagines the story in their mind as they deliver the narrative, and the listeners use the words to build their own movie. The storyteller’s skill rests in delivering a narrative that creates the desired film.

Stories use both channels of working memory because the narrative conjures up images in the learners’ minds. The Imagination Effect can create a lasting memory. For this reason, there is usually no need to show images when telling a story, unless they are of the actual people or objects in the narrative.

As indicated in the image below, a story employs both channels of working memory without needing to display images.

This content is taken from
Health Education England online course,

As children we grow up with stories. In Europe, many children hear the story of Little Red Riding Hood and the Big Bad Wolf. Its purpose is to create a mental model of what can happen as a result of talking to strangers, even though this isn’t directly mentioned. Stories such as these are ‘allegorical’, in that they express a complex or difficult issue in an approachable manner.

In healthcare learning, an example of an allegorical story is ‘Counselling for Toads’. In this book, principles of counselling are played out by characters from the English children’s book The Wind in the Willows. At first glance this seems a little simplistic for adults. However, for those familiar with the tale, the narrative creates a strong mental model because it builds on a story that already resides in their long-term memory.

A story is more than a list of events that follow one after the other. It acts like a film director that tells the listener’s brain what to model and when.

As mentioned in the video, trainers can develop their skills as story tellers through practice. If, instead of reading a story to a child, you tell a story, the delivery becomes much more animated, you find you are describing things you can see in your imagination.

When a healthcare trainer turns off a PowerPoint slide headed ‘Signs and symptoms of malignant brain tumours’, and instead says:

‘I want to tell you about Suzie. Suzie came in to us as a healthy 60 year old woman. She smiled, and said I hope you don’t mind but I can’t seem to shift this headache’.

Now everyone is picturing a woman. The images are all different, but they remain as the story develops and everyone discovers what happened to Suzie.
In addition to practicing telling stories, trainers can experience storytelling and perhaps gain inspiration from stories told in TED Talks and the Moth Radio Hour

A patient who tells their own story often imbues the narrative with emotion that is completely genuine. Such emotion often transfers to listeners in a way that is remembered for a long time.
Patient can be recorded telling their own story with a smartphone video camera. Sometimes, a recording of their voice only is enough. When there is no image to look at, learners tend to focus on the voice in a way that highlights emotion. Whether video or sound only, the quality of the sound affects learner impact. It’s worth using a lapel microphone, particularly if the patient is quietly spoken.
Many trainers are fortunate to have patient volunteers who join in with a training session and talk about their experiences. This has the added advantage that learners can ask questions afterwards.

Many healthcare stories evoke emotion. Some are told with that explicit purpose. The poem ‘The Crabbit Old Woman’ was written in the 1960s by a nurse distressed at the way some of her colleagues treated elderly patients. It is often told to students during their initial healthcare training. This is the first verse:

What do you see, nurse, what do you see?
What are you thinking, when you look at me
A crabbit old woman, not very wise,
Uncertain of habit, with far-away eyes,
Who dribbles her food and makes no reply
When you say in a loud voice, ‘I do wish you’d try’.

Some trainers embellish the poem by telling their students it was handwritten and found in the locker of an elderly patient who had died. The whole poem is available in Downloads below.

A powerful story in practice

‘Instead of telling us a thing was ‘terrible’, describe it so we’ll be terrified’.

We have paraphrased his advice here:

‘Instead of telling your learners a clinical incident was ‘distressing’, describe it so they feel some distress’.

Many healthcare staff who have watched the 2003 video ‘Learning from Error’, experienced some distress. The video re-enacts a true patient story in which the anticancer drug vincristine was injected into the spine instead of via the correct route, into a vein. Viewers watch as factors which contribute to the fatal error gradually play out. They also briefly get to know the patient. The screenshot below comes from the video and shows two doctors checking the drug just before its fatal administration. 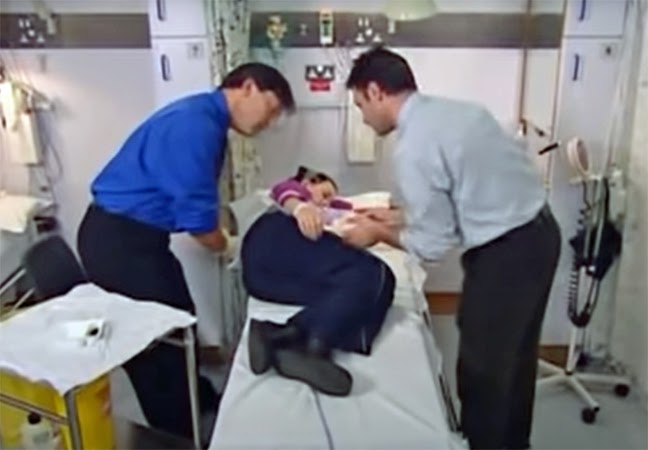 Because we know it is a real story, its impact is powerful. In a way, everyone who watches the video participates in the error as they sit, powerless to prevent it. The maladministration, and the factors which led up to it, become part of the viewers’ mental models.

A link to the video and an associated booklet to support a training workshop are available in ‘See also’ below. ‘Learning from Error’ was a professional production and not cheap to produce. When a trainer tells a patient story well, it can be almost as effective with the enormous benefit that there is no production cost.

This content is taken from Health Education England online course