Find out more
Home / Healthcare & Medicine / Dementia / Understanding Brain Health: Preventing Dementia / How Do We Investigate the Health of the Brain?

How Do We Investigate the Health of the Brain?

Discover tools used to measure the health of the living brain. 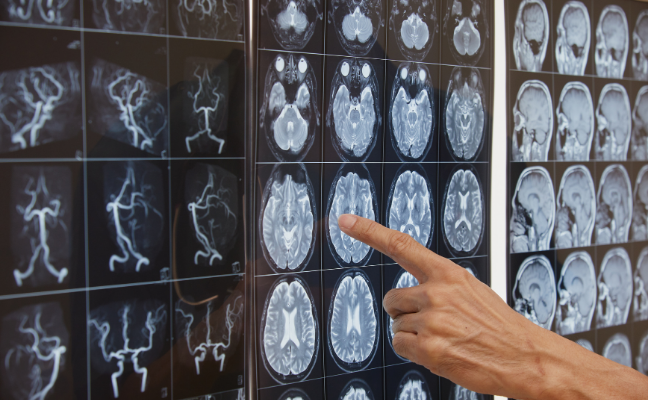 We can’t remove a sample of living brain tissue to view under a microscope. So how can we determine the health of this all-important organ hidden inside our skull?

Over our next few videos, we’re going to hear a lot about neurodegenerative diseases and the specific pathologies in the brain caused by these conditions. To investigate and detect these disease processes, we need to use a series of detailed medical examinations to build up a picture of what might be going on in the brain.

Neuroimaging (brain scanning) can reveal the physical structure, as well as an indication of ongoing physiological processes, of specific brain regions of interest. There are a couple of different types of brain scans that we’ll refer to throughout this course:

MRI Scans – Magnetic Resonance Imaging – allow us to see inside the body in much greater detail than X-rays or CT scans. The images that MRI scanners produce are created by moving powerful (but harmless) magnetic fields and radio waves outside the body to cause a shift in water and fat molecules inside the body. Different parts of the brain have different amounts of water and fat molecules, which appear brighter or darker in the image depending on the type of MRI scan used.

Many single images are taken in a short space of time and then combined to create a 3D image. Brain MRI scans allow us to identify very subtle structural changes to the brain and blood vessels (for example whether certain parts of the brain are shrinking over time) and allow us to visualise brain tissue damage (for example small ‘silent’ brain bleeds).

This video from the Alzheimer’s Society gives a good idea of what it’s like to have an MRI scan. A little later in the course, Craig will guide us through an example of how MRI scans are used in the diagnosis of Alzheimer’s disease.

PET Scans – Positron Emission Tomography – use a small amount of radioactive tracer which has been engineered to bind to a particular molecule of interest. The tracer is injected into the bloodstream and travels to the brain to ‘tag’ that molecule we want to investigate. The PET scanner can pick up on the radioactive tag and use this in conjunction with the images from a structural scan (an MRI or CT) to produce a detailed map of areas inside the brain where the tracer accumulates. We’ll hear more later in the course about how PET scans can help detect the presence of key faulty proteins in the brain that are associated with Alzheimer’s disease. 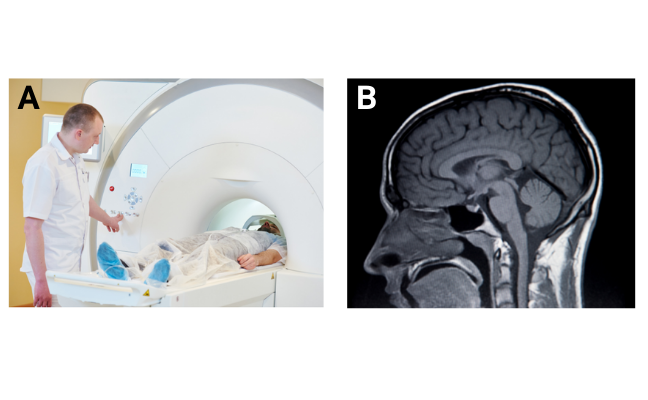 Another method we can use to detect disease is to analyse body fluids for tell-tale signs of pathological processes.

The tricky thing with central nervous system disorders is that we can’t realistically insert a needle into the brain to measure the environment directly. We can however take a sample of cerebrospinal fluid.

Cerebrospinal fluid (or CSF) is a liquid that surrounds the brain and spinal cord and plays a role in cushioning and protecting these structures as well as helping transport substances and remove waste products between the brain tissue and bloodstream. Because the cerebrospinal fluid flows around both the brain and the spinal cord, we can take a sample of fluid from the bottom of the back to get a proxy reading of the brain environment. We can use this sample to assess the levels of certain trademark proteins associated with particular diseases. In our next video, Sophie will introduce some of these key disease-related protein variations.

Cerebrospinal fluid samples are collected by inserting a small, hollow needle into the space surrounding the spinal cord in the lower back (the lumbar region) via a procedure called a lumbar puncture (sometimes known as a spinal tap).

This video from the Alzheimer’s Society follows the process of having a lumbar puncture. 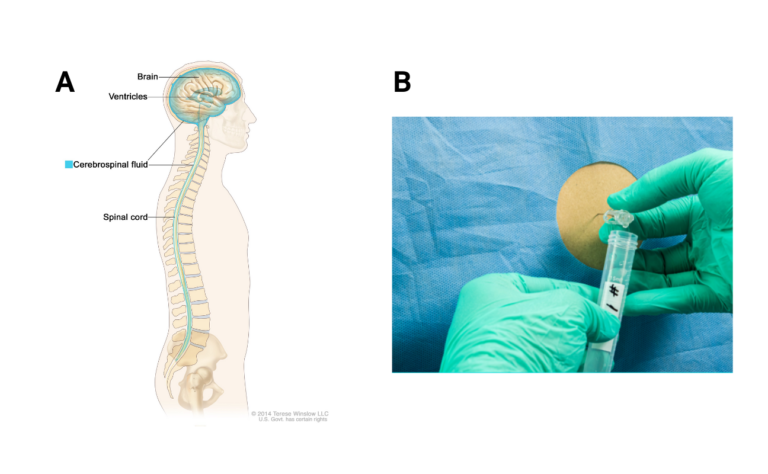 One other way to assess the possible presence of disease is to test the functioning of the very organ that would be affected. The brain.

Cognitive assessments (sometimes referred to as ‘memory tests’) are made up of a series of short puzzles and tasks, specifically designed to probe different types of memory and thinking skills. If someone struggles more than we would expect with a particular aspect of these tasks, it can give us a clue that a certain area of brain functioning might be disturbed, perhaps through an underlying degenerative disease process.

Craig will talk in a lot more detail about cognitive assessments in week three of the course. In the meantime though, having looked at the example of the MMSE, it may be useful to consider whether you feel these types of assessments are specific and accurate enough to pick up on subtle changes in thinking and memory. Particularly at an early stage of the disease.

Now that we’ve thought about some of the techniques that we can use to probe the health of the brain, let’s re-join Sophie to hear more about how neurodegenerative diseases, and particularly Alzheimer’s disease, cause damage to the brain.