The Global Burden of Neurodegenerative Disease

Learn more about the global burden of neurodegenerative disease. 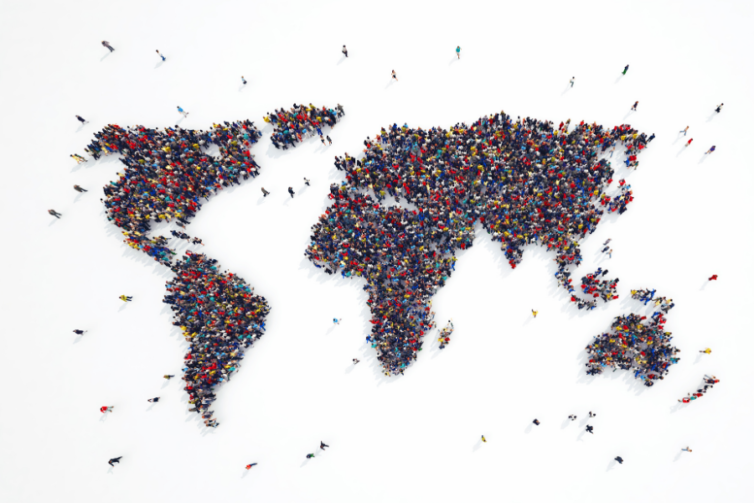 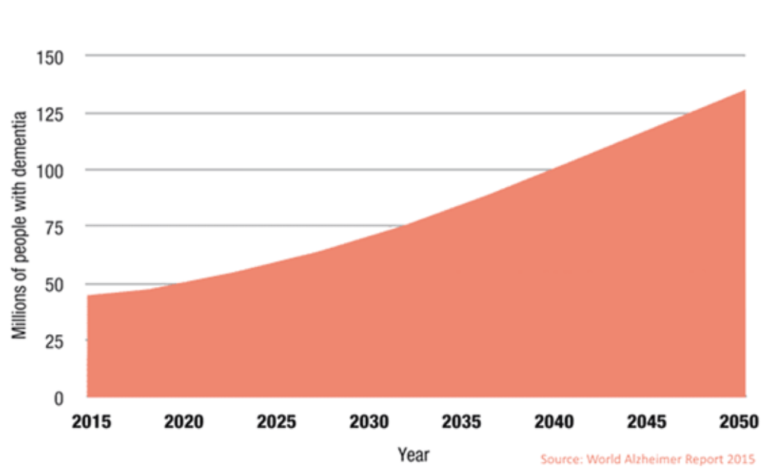 This huge increase in numbers, clearly shown in the graph above, is driven by a growing global population – from 7.7 billion people living on earth today, to a projected 9.7 billion population by the year 2050 – and an ageing population, with life expectancies, continue to rise in most regions around the world.

The increase in these numbers however won’t fall evenly across all countries. The rise will mainly be driven by greater numbers of people in low and middle-income countries developing dementia. 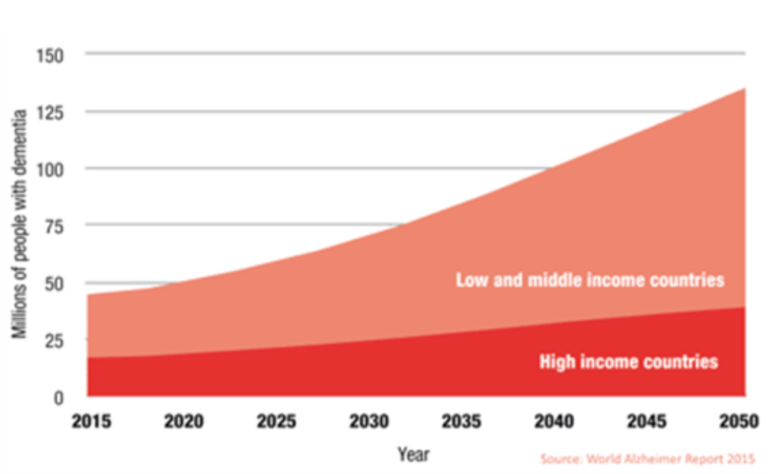 This stark contrast highlights the importance of making sure any interventions developed, be they new disease-modifying therapies or programmes for risk factor modification – must be designed to be relevant and applicable to settings all around the world.

The aim for any preventative intervention is to reduce the rates at which people develop a disease. Interestingly, several recent studies have now suggested that the incidence of dementia (the rate of new diagnoses) may actually be falling in the high income settings of Europe and North America.

At first glance, this can seem a little counter-intuitive. Although less than in lower and middle income countries, we can still clearly see from our graphs above that the numbers of people living with dementia in high income countries overall is on the rise. How can this be if we also say the rates of developing dementia are falling?

The reason comes down to the difference in the prevalence and the incidence of dementia.

Prevalence describes the total number of the population who have dementia at any one point in time. So for example, today there are 50 million people worldwide with dementia.

Incidence describes the rate of new cases of a disease developing. And so is calculated taking into account a measure of time. For example we could say that 16 per 1000 people aged 75-80 per year develop dementia.

The per 1000 people part is important here as even if we reduce the rate at which new cases develop, the fact that there are many more people on the planet means we still see the total numbers rise, just at a slower rate than previously.

We can’t be certain exactly what has led to this reduction in the rates of new cases over recent decades in Europe and North America. Better management of heart health and increased access to early life education would be promising candidates for driving the improvement in brain health. Again this reinforces the importance of continuing to work hard at a societal level to further tackle risk factors for developing neurodegenerative diseases. With some risk factors, such as obesity and diabetes, on the rise in these settings, we need to ensure the overall trend in disease reduction is not reversed.

A Roadmap to Prevention

If we think back to our list of 12 modifiable risk factors included in the Lancet report, we see that a number of these factors, such as low educational attainment, hearing loss, obesity, smoking, low physical activity levels, are found at higher frequencies in low and middle income settings, compared to in high income countries.

Therefore we could make the case that there is even greater potential for prevention in these settings. And indeed using the same methodology as in the Lancet report (which used data predominantly from high income countries), researchers have estimated the percentage of total dementia cases which are potentially modifiable to be as high as 56% in some low and middle income regions.

This gives cause for optimism but also re-emphasises that strong imperative to make sure any prevention initiatives are appropriate, realistic and relevant to these settings.

Addressing risk factors in high income countries alone will make negligible difference to the wave of future cases in the global dementia epidemic.