Discussion of the Gender Pay Gap 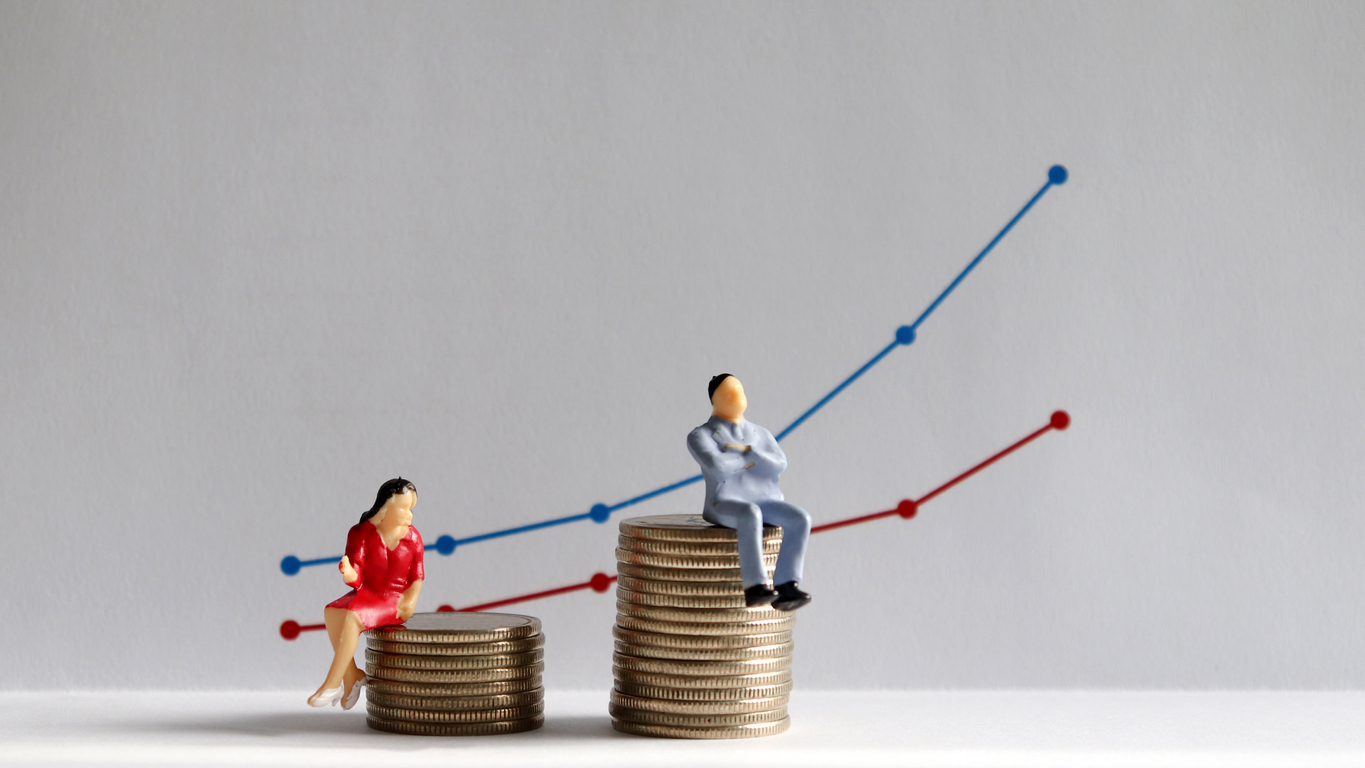 The typical average measures used are:

Mean: compares the arithmetic average pay between men and women (usually calculated on an hourly basis).

There is no universal calculation for the gender pay gap and the specific type of pay gap calculation may vary between contexts. For example, a distinction is often made between an adjusted and unadjusted pay gap. An unadjusted pay gap measure provides a ‘raw figures’ on the average differences in pay whereas an adjusted pay gap measures the pay gap after adjusting for various factors such as type of occupation, education and experience that might influence the pay gap. However, many pay gap calculations are not labelled as either adjusted or unadjusted. In the main, unadjusted figures include an adjustment for time worked by adopting an hourly comparison figure, which captures the rate of pay.

To adjust or not to adjust?

Gender pay gap reporting became mandatory for firms, charities and public sector bodies of 250 or more employees from 2017 in the UK.

In the UK, the calculation includes basic or piece-rate pay, shift premiums (e.g. for unsocial hours), on-call, location or vehicle allowances, recruitment and retention pay, and pay for leave, but excludes overtime payments and the value of benefits in kind such as a company car.

Organisations can also provide an explanatory statement to underpin their pay gap reporting. This might explain the pay gap or set out actions being taken to reduce any gap.

The inclusion of bonus pay data ensures that aspects of pay that might be discriminatory – such as higher performance related bonuses being paid to men rather than women – are also captured in the analysis. Since bonus pay is disproportionately awarded to those at the higher echelons of an organisation the proportion of men and women receiving bonuses is also a valuable indicator. The quartile distribution indicates the proportion of men and women at the top, middle or lower levels of the pay scale, demonstrating, for example if men dominate the higher paid positions. 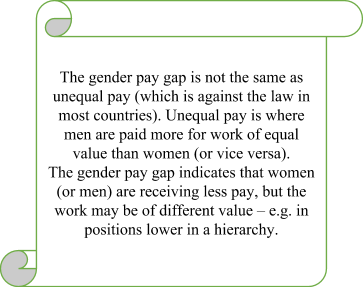 Causes of the gender pay gap

The causes of the gender pay gap are multiple and diverse, and incorporate influences from society, government policies, organisational policies, and individual choices made in light of social norms and expectations.

Sometimes the causes of a pay gap can be the consequences of other initiatives that are designed to increase gender representation. For example, many firms in science-based subjects, such as engineering, are actively seeking to increase gender representation in their workforce. But, by ensuring they employee more female new recruits – particularly at graduate/entry level – this simultaneously increases the gender pay gap as more women are represented at the lower levels. We can see how the ‘pipeline’ plays a role here by considering the effects of limited female participation. Often this starts at school, where girls are less likely to take science-based subjects, which in turn affects university admissions, graduate numbers and thus the number of qualified engineers entering the workplace. We may also see points at which the numbers significantly reduce. It may be that approximately equal numbers of girls and boys study the subject, but fewer women go on to study it at a higher level, and yet more decide the career is not for them. Efforts to address this (by encouraging girls to study the subject or encouraging women to embark on a career in the field) will damage the gender pay gap in the short-term as more new entrants join at the entry level, with the hope that it increases representation and eventual progression to senior levels in the longer-term. The explanations for the pay gap are therefore an important part of the analysis of its causes in any organisation or sector. 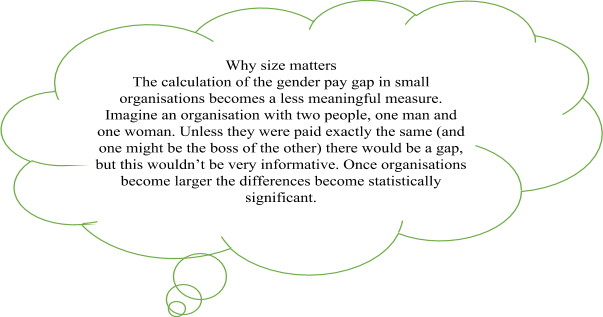 Why report the pay gap?

The hope is that by reporting the data, and opening it to public scrutiny, organisations will take action to address the gap. It provides numerical evidence for pay gaps that is likely to have more impact than anecdotal commentary. It also enables employees to make informed choices about their prospective employer, although this should not be overstated, as many employees are not able to relocate for their employment, and women are disproportionately likely to find themselves having to select an employer from their immediate locality in order to manage their caring responsibilities alongside their work.

In the UK, organisations are encouraged to develop an action plan to address the gap, and advice is given on how this can be achieved. We’ll explore organisational practices that can increase equality and reduce the pay gap in week four.

The effects of pay gap report?

To-date gender pay gap reporting hasn’t resulted in significant improvements, but it is early days. The UK reporting exercise has completed its second year of reporting and the evidence suggests that fewer than half of the reporting organisations have managed to reduce their pay gap, and in many cases the pay gap has increased to the detriment of women. There are also instances where the pay gap favours women, but these are the minority and the gaps tend to be comparatively small.

Evidence from Europe and elsewhere also suggests that pay gaps remain and are closing at a very slow rate. The BBC have an animated summary setting out the latest gender pay gap results. UK organisation level data can be found on the government website.

The closing of the pay gap is clearly an equality concern, but it is also associated with productivity. The gender pay gap indicates that women struggle to achieve the higher paid positions, which is a loss of talent. To attract and retain this talent organisations need to have appropriate recruitment processes, flexible working practices and job design, for example. We’ll return to these in week four.

Equal Pay Portal, provides information and advice on equal pay and the gender pay gap in the UK

Statistics Explained is an official Eurostat website presenting statistical topics in an easily understandable way. This link provides information regarding the Gender Pay Gap in Europe.

An article considering the Motherhood penalty

This animation introduces the key concepts of Unconscious Bias