Keying isnt just a digital invention. From the early days of cinema in the 19th century film makers had used 'mattes' to amaze their audiences. 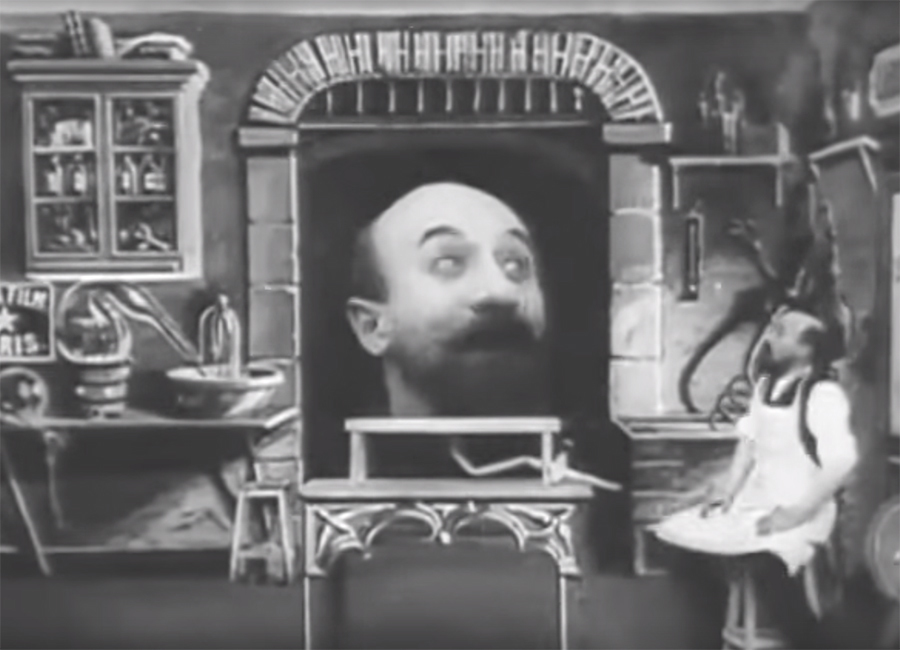 Although we now live in a digital world where keying is concerned, the desire to transplant images from one film into another is as old as cinema. Well, actually older, because cinema only developed as a phenomena years after film was being used in fairgrounds and magic shows.

The image you see above is from one of Georges Méliès films. Méliès is the ‘godfather’ of VFX; in fact one of his most famous images, that of a rocket stuck into the eye of the moon- is the symbol of today’s Visual Effects Society, the organisation that looks after VFX worldwide. Méliès is held in high esteem to this day.

You could say it all started in 1888 when George Eastman developed sensitized celluloid that you could expose an image onto. The first successful system for filming and projecting moving pictures came in 1895 when the brothers Auguste and Louis Lumière exhibited the Cinématographe in Paris. They were businessmen not artists, and they thought the Cinématographe would be a passing craze. They made short mundane films by today’s standards – a woman combing her hair, fireman extinguishing a fire, a baby being fed. The idea of projecting a story came later, but there was a restriction on the duration of early films so this wasn’t possible at first.

Méliès was an enterprising theatrical magician who saw the potential of this new development for his stage act. When he couldn’t buy a system from the Lumière brothers, he hired a couple of engineers to build his own. It’s reckoned Méliès made over 500 films in his lifetime, but only a handful survive.

There were two big breakthroughs in the early days of film. One was the substitution cut where the camera was stopped and an object in the scene replaced or removed. This amazed early audiences, and Méliès discovered it when his hand-cranked camera broke down whilst he was filming. There was a gap of a minute in the street scene he was filming “I suddenly saw an omnibus changed into a hearse and men into women” he exclaimed. You can see an early example of this substitution cut if you search for Alfred Clarke’s “Execution of Mary Queen of Scots” (1895) on YouTube. At the time of course, this was all new and people were amazed.

Discovery of the matte

The second effect, and the one that concerns us most here, was the matte, used with a double exposure. It was discovered that if you exposed the film (by shooting a scene) and then wound the film back into the camera, you could expose a new image over the top. Filmmakers like Méliès saw that if you left parts of the scene dark in the first exposure, then you could align some action to happen in that space on the second exposure. The India Rubber Head (1901) was a case in point. (See if you can find a version to see on YouTube if the above link has moved.)

From the still at the head of this article you can get the idea. An alchemist/scientist places a version of his own head on a table and begins to inflate it with bellows. Conveniently there is a black shadowy archway where this double exposure happens. The head ‘expands’ by having the camera move closer in the second exposure. Filmmakers soon started experimenting with Matte boxes- simple bits of card over the lens that stopped portions of the film being exposed to light the first time, and then inverted this on the second exposure.

As film processes developed, and film became more sophisticated, the weaknesses of simple mattes became apparent. It would only work if the camera and actors were still or stayed in a fixed area. A travelling matte allowed a freely moving person to be cut out and placed on top of a background without winding film back through a camera for double exposure. To achieve this, just like today’s green screen, an actor would perform against a contrasting screen. In film terms this meant creating a number of differently developed prints from the original, starting with a very high contrast film of our foreground character (let’s say, dancing around). Then a high contrast negative of this would be created too. Put simply, these two high contrast (black and white) filmstrips of our dancer would be used to create masks or mattes for both the dancer and the background. This film technique was like having a magic moving piece of card that ensures only the dancer is exposed on one film, and that the background has a perfectly synchronised moving black shadow where the dancer should be. These two films are optically printed (projected and refilmed) and combined together and, hey presto, our dancer seems to be dancing on the moon or whatever the chosen background image was! This method was prevalent from the 1920s till the 1960s.

As film grew in commercial importance, there were many variants of this process created; but essentially it’s the antecedent of what happens today digitally. When colour film started gaining ground (around 1918-1936) clever new methods to separate foreground and different background were invented. One particular method was the Blue Screen Colour Difference process. Invented by Petro Vlahos it became the basis for the most widely used methods of getting a travelling matte until digital techniques were possible in the 80s. The process demanded a very pure blue backlit background. The film negative produced was copied onto black and white filmstock through a blue filter, which allows only red and green to expose the film, so the blue area is transparent. However there is always likely to be a bit of blue on the foreground character so this black and white film was combined with the original negative to make a new high contrast matte, but this time through a special green filter. By now the blue screen is clear and the foreground character totally black. This ‘male matte’ is then copied to a negative ‘female matte’. There are several other stages to this- each one with other film prints. Aren’t you glad we now do this digitally?

The advantage of this system was detail- around hair for instance, and it recorded semi-transparent objects like a glass of water or reflections on a window very well. The system was even used in Superman (1978) -although Superman’s costume was blue, they were able to pull a decent key through this method.

In the digital age we still use some of these tricks to pull a decent key, although it all happens now at the tweak of a mouse, we don’t have to wait overnight for film to be processed through chemicals. However, we sometimes still need to look at the individual Red, Green or Blue channels of a foreground image to make a matte work. It can still be laborious to get your key as convincing as you want it to be.

YouTube is a great place to look for early cinema firsts, like Georges Méliès or Petro Vlahos’ work. It’s been said that many of the first pioneers of cinematography shared similar characteristics to today’s guerrilla filmmakers; the ability to experiment, make do with what they found around them, and inventiveness. Just like today, the field was wide open for newcomers to create things never seen before. As an example have a look at this film about the first colour film ever invented. If you find any interesting clips about any of the subjects in this article, why don’t you share them with all of us?

Next we’ll see how Justin Hunt from Ember films creates a great green screen image which you’ll have a chance to key very soon.