Featured film: Sky Captain and the World of Tomorrow (2004)

Can a film made entirely out of blue screen scenes work as an artistic and commercial success? They tried in the noughties, with an all-star cast. 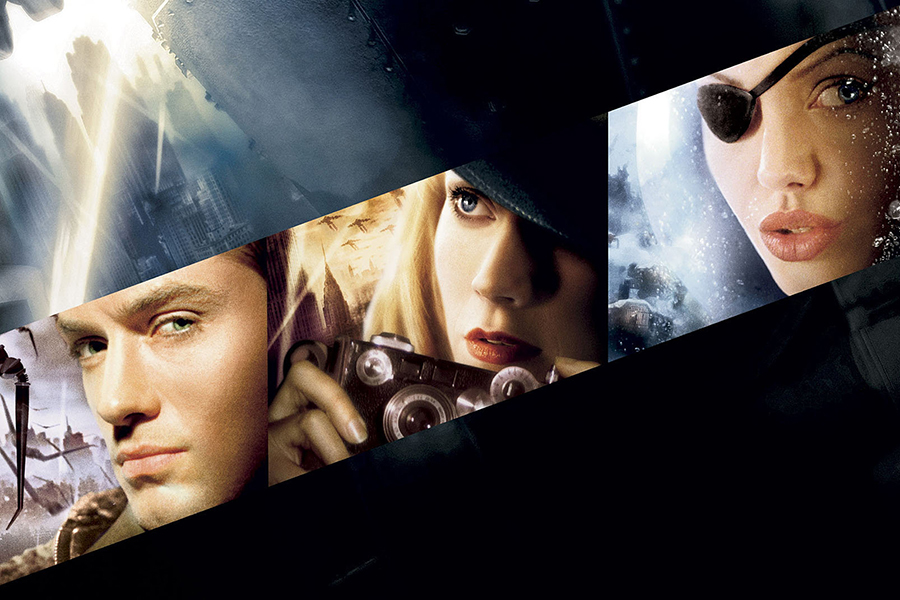 This is a story of a time when many film executives thought totally keyed films were the future for the film industry.

The mid-noughties were a time of experimentation with some of the VFX techniques which were becoming standardised at the time, particularly keying. Films like Sin City (2005) and 300 (2006) or the lesser known Immortel (2004) experimented with a ‘graphic novel’ look and the notion of a “blue screen only” approach to filmmaking. They were what someone coined ‘digital backlot’ films. In other words they were populated with virtual sets rather than real ones. They were reliant on CGI set design, rather than real set design. Optimistic studio bosses saw this as the future, as did their accountants.

One of the first films of this kind, and now relatively forgotten because of the modest box office gains, was Sky Captain and the World of Tomorrow Although featuring Jude Law, Angelina Jolie and Gwyneth Paltrow the film very much had guerrilla filmmaker roots; in 1999 director Kerry Conran was haunted by an incomplete student project after he left CalArts (California Institute of the Arts), so he experimented with a Mac for a few years, using archival photos for backdrops on a home-made blue screen in his Los Angeles apartment, persuading friends to be stand-ins, and pushing a primitive version of After Effects to its limits.

Almost four years passed until Kerry had completed a 6 minute showreel of his idea. It was picked up by a producer who saw potential, and soon there was a 70 million dollar budget. Time to move the blue screen out the apartment.

Sky Captain and the World of Tomorrow is set in a re-imagined retro New York of 1939, with Jude Law as the eponymous Sky Captain, a dashing figure, fending off giant attacking robots, whilst swooping over art deco buildings in his fighter plane. Principal photography of the Blue Screen live action happened in Elstree Studios, London and the 3D modelling and animation (in Maya) was simultaneously created in Los Angeles, as was the digital compositing and editing using (at the time) ‘top of the range’ Discreet’s Inferno, Flame, Flint and Smoke systems and using a program called 3D Equalizer for the tracking. The original idea of an old newsreel black and white look became a muted colour palette to appeal to cinema-goers, but otherwise Kerry’s guerrilla vision still drove the project. It ended up as over two thousand effects shots.

The process was that Kerry’s script was read through by the actors and recorded, and a storyboard edited to that timing. Then a 3D CGI animatic was built (essentially a 3D moving storyboard). A grid on the floor of the blue screen studio matched a grid on the ‘floor’ of the computer’s 3D scene of various ‘fantasy New York 1939’ locations so both the actors blue screen performance and the correct 3D background angle could be lined up. In the 3D CGI program (Maya) they could also ensure its focal length ‘view’ of the 3D scene matched the physical camera properties of the chosen Sony HDW-F900 CineAlta camera with its Fuji Zoom lens.

Essentially the two components of the film were being created in different countries (UK and US) at the same time. It was like making two halves of a car in two separate countries, and hoping the measurements were exact and they would eventually be welded together perfectly. In fact a miscalculation meant that they were ten inches out, because they were measuring shots in Maya from the virtual 3D camera focal plane, whereas the real physical camera in London was measured from the tip of the lens. Luckily this was discovered during tests and corrected much to the relief of the accountants. Although ten inches difference wasn’t noticeable on wide angle shots, on close ups it would have caused an odd disparity between background angle and foreground.

At the time, journalist Michael Stroud proclaimed “Well, the times, they are achangin. Get a Mac and Maya and some really talented kids and you can make your own sci-fi epic”.

According to Darin Hollings, visual effects supervisor for Sky Captain, “Anyone with the creative wherewithal and a computer in front of them, even a high school student, could create a piece that could catch the eye of a studio executive”.

The mid-noughties were heady times. Is there still room for guerrilla film makers like Kerry Conran to get their vision funded? Or is the industry more risk averse these days? What do you think? Can you share any other VFX heavy movies you’d recommend we look at that were initiated by a newcomer to the film industry?

If you’d like to know more about first-time director Kerry Conran’s approach, you might want to see this article of the time.