MPC dossier: taking your 3D comp to the next level

We join MPC's Ian Murphy for a critique on how we might review our work this week to take it up a notch. 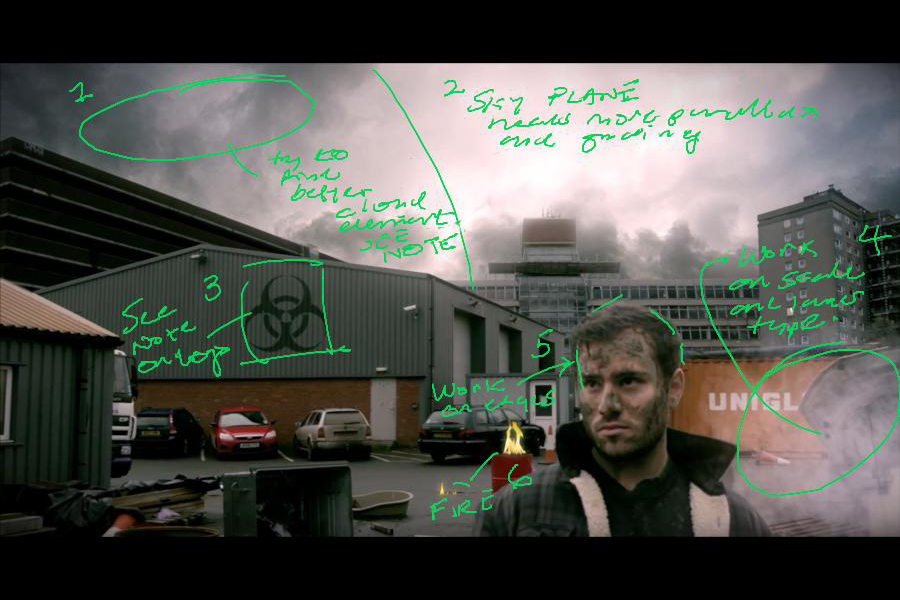 Visual Effects are all about getting the details right. The last 20 percent of any composite can often be the most time consuming. There’s always more you can do to a shot and at some point you have to call it done and move on!

It always helps to get another set of eyes to look over your work, and dispassionately reviewing it will make your VFX work GREAT. We invited Ian Murphy, Senior Film Compositor and Training Lead at MPC back to give us his notes and observations on what to look for in our week 4 shot.

In the industry VFX companies hold what are called Dailies: a gathering of the team who will look at the shots underway and collectively comment on how they are progressing with the aim of making the work the best it can be within challenging timeframes. That’s why scheduling your shots is important – the amount of time you have in post will directly affect how many shots you can complete on a project.

Have a read of what Ian suggests below, and then see how we used his comments to change our comp HERE.

Note 1: Moving clouds on the left?

Sometimes it’s difficult selling clouds as real if they either don’t move, or move too quickly. So usually I’d suggest painting the original clouds out of the sky. Leave a light grey base, and instead find a section of cloud footage that has a convincing movement and use it instead. When compositing library elements, MPC compositors often take small sections of an image – re-time them slightly, flip and scale them, then use them as mattes to run a solid grey colour through.

It’s a good idea to take some time to look at how clouds move across the sky in reality and ensure you bring the same speed, scale and colour subtlety to your work.

There is some parallax effect here – but we might need more. Parallax is the phenomenon by which as we change our vantage point objects nearer us seem to move more markedly than objects in the distance. The movement of the sky has the feeling of being locked to the camera – try to move the sky plane back some more to increase the parallax effect. Imagine, those clouds lower down in the sky could be a few thousand feet in the air – they’ll only move a bit in relation to the movement your camera has – it won’t seem like much at all. You can reference this yourself with the camera on your phone. Shoot in movie mode in the street or in a park and move from a standing position to squatting one – see how any object or bits of buildings close to you appear to move more dramatically than the clouds in the sky.

Ask yourself, are the clouds too ‘sharp’ (too much sharp focus). Look hard at the plate. You want your audience to believe those lower clouds are real, so you need to mimic how ‘soft’ the focus on the plate is at the distant buildings and with this as reference, make your clouds similarly out of focus.

Note 3: The biohazard symbol on the building

Should the symbol be that big, or smaller? Is its focus matched to the details around it? It doesn’t look as if it’s been stencilled or painted on the corrugated metal that clads the building. Nor does it look like a typical vinyl sign. It might be better if it was smaller, human sized – like you could imagine two people have been up there on a scaffold sticking it up! What’s the story? Could it be dilapidated, losing colour, small pieces having fallen off? Make it hint at a ‘back story’. Look also at the depth of field – your actor is in focus – but the cladding on the building that the symbol is on is soft (out of focus) – to see how much, look at the corrugated line details.

Note 4: The steam/smoke on screen right, coming from the car’s engine.

We could probably make this more subtle. To me, the smoke would be more convincing at half the size it’s currently used at. Don’t always layer smoke on using an Add or a Screen layer mode. Again, observe how smoke works in real life. Unless smoke is lit up from the back with something off screen or is drifting across something light emitting – it won’t brighten the background it’s floating across. Use a less than a 100% layer opacity and consider using two or three very subtle layers rather than one.

Note 5: Contrast on the face

I always look at the background plate for reference for contrast – it looks like it was shot on a day with flat, even cloud cover. We can tell this because the edges of shadows look very soft. There is lots of bounced, diffuse light here, not much direct light. We’d try to match our hero’s face to the overall contrast and soft shadows in the background plate. Have a good look at the parked cars and other details that cast shadows behind him. His face may need more contrast for him to fit into the plate properly.

Do the flames look right at that scale on the oil drum? When using elements like this it’s always tempting to show them off, but sometimes subtlety is more persuasive. The other issue here is related to photographic exposure. Over all we have a fairly diffusely lit, dark scene. Our Director of Photography (DoP) will have set the exposure so the camera’s sensor registers a fair amount of detail in the image, so if you were to set up a real fire or put any very bright object in the scene in reality – it would overexpose to such an extent as to make the flames appear blown out (bright but lacking detail) in the final image. It’s this kind of reality that the artists at MPC try to bring to the VFX work they do.

You’ll be able to observe this phenomenon yourself, if you expose your photography (still or moving) for either dark or bright things in the same scene. This is a good learning exercise for anyone who wants to improve their VFX work.

Note 7: Edges around the talent (and buildings).

As is often the case when keying actors – you can get a grey, slightly despilled edge that shows your matte is a little too wide. This is all because the mixed pixels on the subject’s edge are neither fully green screen nor fully foreground actor colour, so often don’t key out properly. There are a range of tricks and techniques a compositor at MPC would need to fix this problem. One of them is to try to avoid ‘choking’ the matte – it’s tempting to contract the matte but this removes the all-important edge detail. Instead think about how you could adjust/grade any edge ‘despill’ colour to be less neutral grey and closer to the colour of the actor himself.

Although we are bringing different shot elements together in this comp, we need to make them all look as if they were shot under the light of the scene.

At MPC we often use a temporary grade operation to make the highlights (and the shadows or blacks) more extreme. Are the blackest blacks and the whitest whites similar in all the elements? Imagine you are turning the brightness up and down on a TV.

Depending on the software you are using, if you have no controls in the viewer to do this, you could try putting a temporary grade or colour correction effect onto your entire comp that darkens or exposes down everything and depending what you find, add another grade effect onto only the layer or plane that needs to be adjusted. In this case, the ‘hot spot’ of what seems to be the sun breaking through in your sky, may be just too hot (too bright), compared with the rest of the picture.