Lead Compositor Matt Plummer started out making the effects for his friends’ short films, and give us advice on how to get involved in guerrilla VFX. 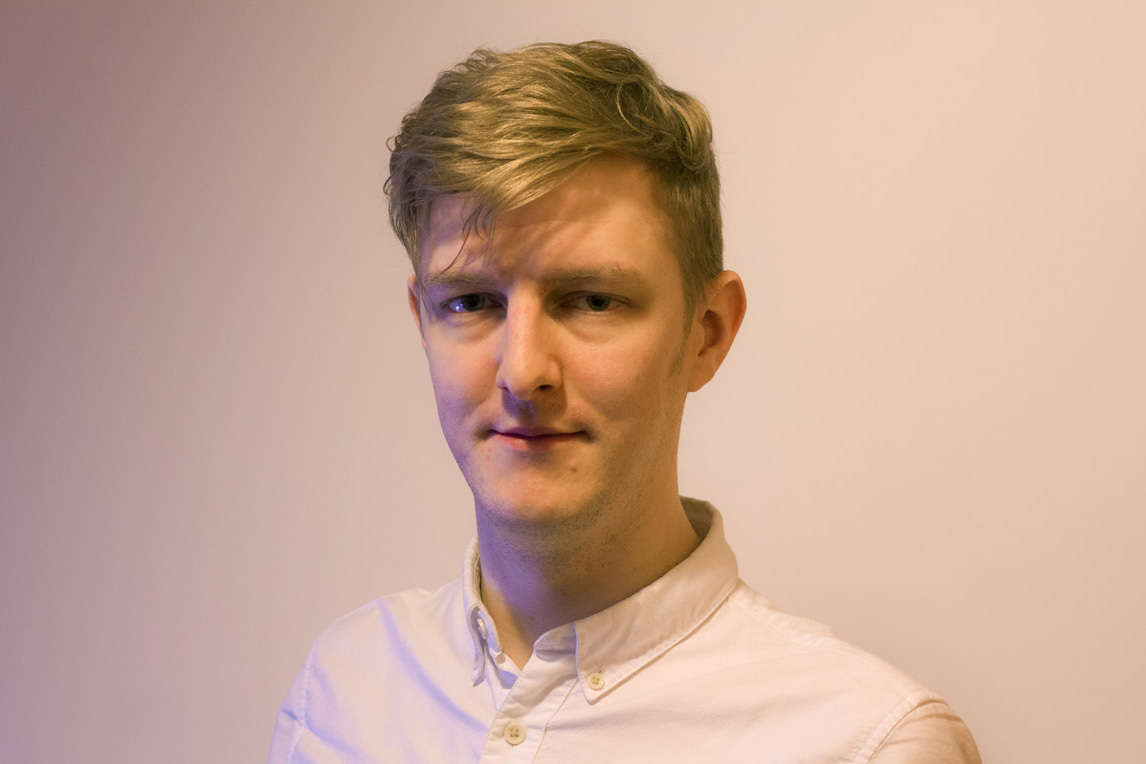 VFX artist Matt Plummer started out making the effects for his friends’ short films, and now is a Lead Compositor at London’s Jellyfish Pictures. What started him on the road towards professional VFX? Let’s ask him.

1. Who are you and how did you first get started in short films?

I’m Matt, A VFX compositor in London’s film and television industry. My recent projects include Kingsmen: The Secret Service, Hercules and White House Down.

I got started in short films through a friend of mine who was an aspiring film maker and would shoot his own short films – I expressed an interest in being involved which led to me being the ‘VFX guy’ for a short no-budget film he was planning called “Project One”. He also introduced me to the filmmaker’s community around FXHOME, the company that eventually built HitFilm, through which I later got involved in many other people’s projects. I eventually worked on the VFX projects for a few members (who later became friends) – Between the Lines by Ashley Wing and Lord of Pain by Daniel Cox. So, the short answer is – a friend dragged me into it, and finding an online community with similar interests kept me there!

2. What was your entry level software/kit at the time? Was it difficult to get started?

All of Project One was composited with Chromanator, an early compositing app made by FXHOME. It had a really easy to use muzzle flash generator which was indispensable at the time. I was also using After Effects, Photoshop and Premiere for editing and image manipulation. In terms of shooting the commonly accepted indie film-makers camera of the time was a Canon XM2 – it shot DV at 720×576 onto tapes!

Interlacing (when frames used to be displayed by alternating lines for technical bandwidth reasons) used to be an issue, which it isn’t any more. Low resolution meant there was less to process both in terms of disk space, and the required detail needed for work to be convincing – and although technology and its associated costs have decreased a long way, in today’s climate shooting in 4K is just around the corner which I think will become a bigger hurdle for today’s guerrilla film makers than anything I had to deal with. Software wise – there’s still a lot you can get for free, iMovie and Windows Movie Maker were and are still viable options and Blender has matured into a really powerful bit of software – there’s also HitFilm Express for effects work. I don’t think I had access to a free compositing application back in the day and was really saved by having access to software through University!

3. Can you think of a way you got round limitations in your film making at the time?

I think the biggest limitation to an individual tends to be finding either sources of advice or people to work with – whether that be creatively or in terms of people to act in your projects. The solution is to be active online though you’re also in a great position if you involve friends who live nearby. It can be tempting to be a one-man army, but don’t overlook the advantages of working with others. There are websites teeming with people involved with Improv or acting courses who are usually looking to act in short films – so it can pay off doing a lot of concept work and planning to attract people to your project through these – remember, try and make sure the people giving you their time for free are rewarded for their involvement in some (even if small) way.

Big ideas are easy to think of, but it’s best to tailor your projects around limitations you know you have – what resources or people you have in the immediate vicinity- a lot of people get stuck making something grander than is reasonable for them to achieve. As an example – if you haven’t got access to an established crew or actors, and have little experience with post-production, an epic sci-fi feature film isn’t going to make for a good first movie – you could just as easily make a horror movie with a couple of friends in your apartment and take from it the invaluable experiences of camera framing, lighting and directing actors. Start small and build your knowledge of techniques and film-making to identify where and how you can add production value. There will be times where a small amount of extra effort in planning a shoot will be much faster, easier and cheaper than doing something in post-production, even if it’s something you can achieve.

In Project One for example, there were a few shots where there were more soldiers than we had replica rifles for, so filmmaker Joby Stephens created cardboard cut-outs of rifle shapes which people who were out of focus or in the background carried. We also used a paintball gun loaded with home-made “dust balls” – little plastic balls of dust, to create realistic bullet-hit practical effects which helped actors know when to fall over, as well as it looked awesome. 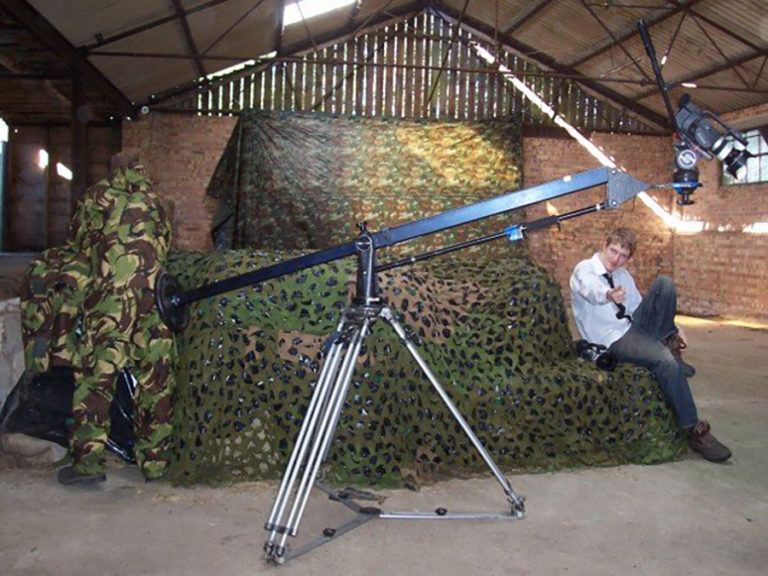 “Joby Stephens used a jib for smooth establishing shots, then switched to hand held for action shots. It’s important to choose the right gear for the right shot, as different techniques look very different on screen.”

4. What’s the best advice you got in terms of making vfx for films?

“Be open to criticism” is one that comes to mind. The people who encouraged me to take advantage of the internet and other resources (there are loads of great books) to learn as much as possible, indirectly provided me with the best advice I could receive – as it led me to buy books and join web communities full of experienced people. That ultimately led to me learning the software and skills that got me a job in the film industry creating VFX.

5. What are you doing now and did your guerrilla filmmaking help?

I’ve recently finished being a 2D lead on an animated TV show which involved a fair few green screens with puppetry of objects as a reference for a (yet to be created) CGI creature would interact with actors. Having a basic understanding of filmmaking in general but also the VFX techniques that go with that definitely helped me direct the crew to capture footage that would later be easier to work with.

6. Do you have any specific advice you’d like to give to newcomers on this course?

Here’s my advice on shooting green screen: Make sure to light evenly and stand your actors a short distance away from the screen to avoid too much green light bouncing off the screen onto them. Also, give consideration to what you’re going to put in the background and things like what colour hair your actors have, what are they wearing? Are they blonde? Maybe a blue screen would be better. Plan plan plan!

As for Roto work: Take time and understand the movement of what you’re rotoscoping, don’t just keyframe every 2 frames. Try and keyframe at the extreme points of the objects movement. Don’t use one big shape, break your object down into components and use individual shapes for each one. If you’re having to constantly add points or there seem to be way too many – consider breaking it down into more objects.

My Masking/Cloning advice is to pay attention to the scene’s lighting. If you’re outside – the changing time of day will trip you up once you try and split screen! If you’re working with 3D animated elements then you need to understand your camera’s lens and processes like camera tracking are going to be as important as your elements animation. For example – are you shooting on a DSLR that records h264? Then your footage has jpeg compression you’ll need to apply to your CG elements in order for it to fit in properly with your footage. 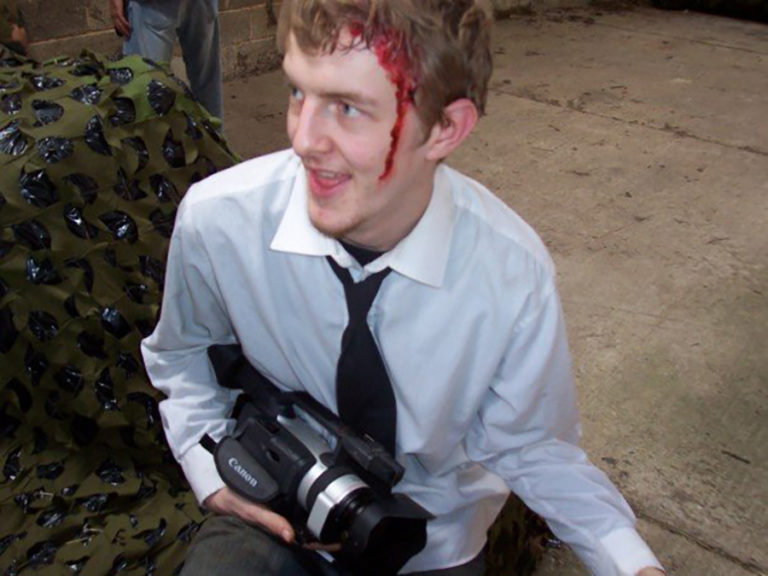 As a guerrilla filmmaker, it’s often efficient to do more than one role to get the job done

7. Whose work do you think it’s good to look at to understand what’s possible with low budget vfx?

Captain Disillusion is, in my opinion a really great youtube channel – partially because he showcases great, usually cheap VFX or camera tricks, but he also fully explains the techniques and thoughts behind them which are far more useful concepts to understand about what’s possible at a low price – largely because there are some very, very talented people out there who make cheap, good quality VFX look easy – take Corridor Digital and Freddie Wong for example.

8. What software do you use now and why?

I use Nuke – it’s a node based compositing application that’s the standard for compositing in the film industry. Being node based means there’s a huge amount of power to alter your image later whilst what you’re doing is readable at a glance – nothing is hidden away in an effects pane or deep in a pre-composition. It’s all right there. My personal opinion is the way it operates in terms of colour correction and basic image maths is much more powerful than what’s available in layer-based packages.

From time to time though, I’ll use a variety of tools. If I’m working on a personal project – After Effects can be useful since it manages clips of footage effectively and the timeline is better for animation than Nuke’s. I still use Premiere and Photoshop when I need to create a still image element or edit a sequence of clips together. I make heavy use of Python (the programming language) and Komodo an Integrated Development Environment (IDE) to automate tasks.

Matt shows us technology is always moving on. He used DV camera tapes creating images that seem lacking in detail by today’s standards, in an era before YouTube had really launched, and digital effects took a while to render. Yet his advice has a lot in common with younger filmmakers today- and he’s made a great career based on it. Do you find his advice useful? What do you take from this interview that resonates with your own journey in film? Let us know in the comments below!