The Queen on screen 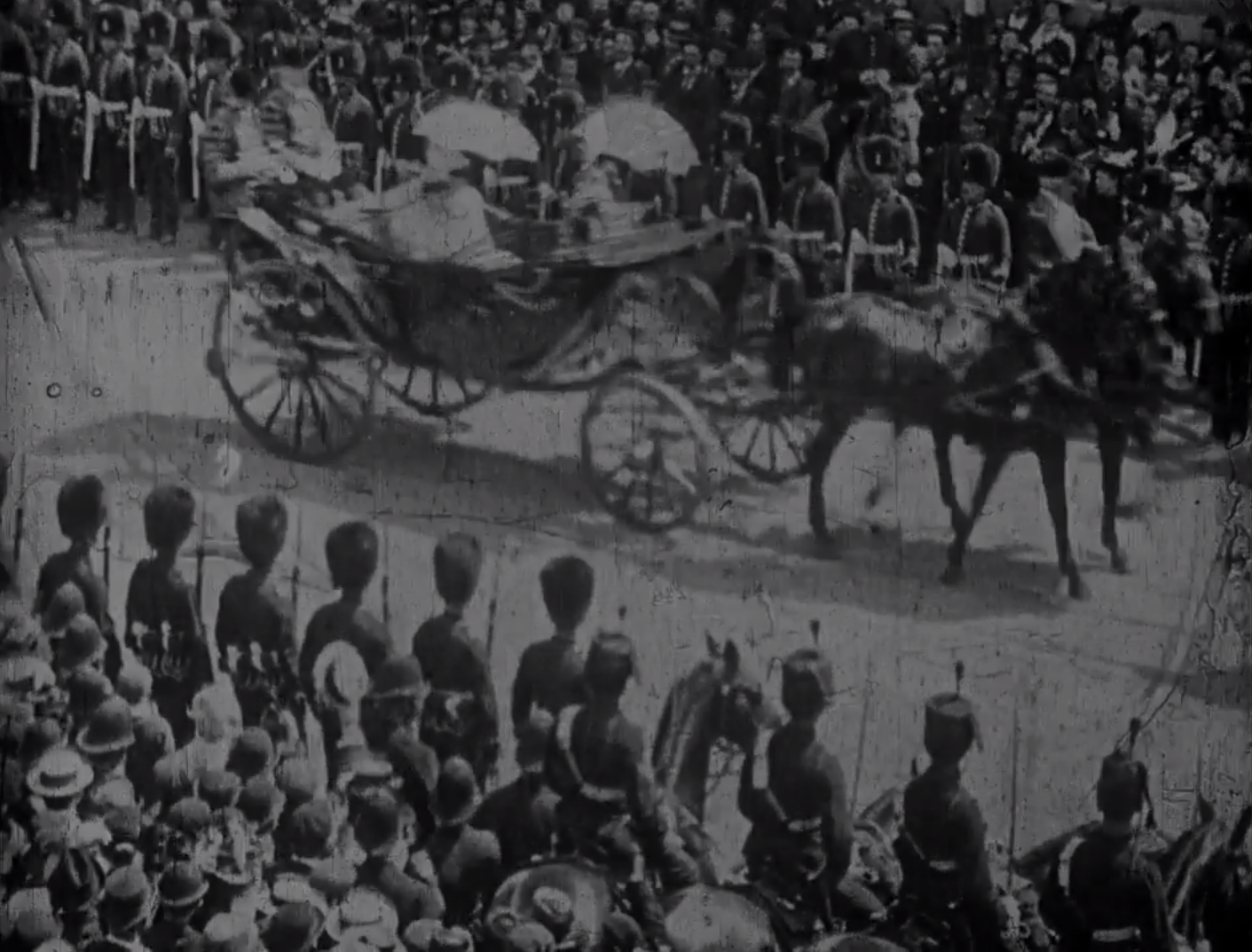 Queen Victoria was one of the celebrities of early film. Royal events and processions had guaranteed appeal.

Victoria was not the first member of the British royal family to be filmed however. That honour went to the Prince of Wales during a visit to the Cardiff Exhibition on 27 June 1896 by the filmmaker, Birt Acres, who subsequently exhibited his films to the Prince and selected royal guests at Marlborough House on 21 July. The attendees included guests for the wedding of Princess Maud, the Prince’s youngest daughter. He was so pleased with the results that he invited Acres to film the wedding.

Victoria was first filmed at Balmoral on 3 October 1896 during a visit by Tsar Nicholas II and his wife, Alexandra. The invitation to film this event went to John Downey, the son of the court photographer, William Downey, who had first photographed Victoria in the 1860s and who was responsible for the official Diamond Jubilee portrait. The Queen was filmed going up and down in a pony cart, and she described the experience in her journal:

At 12 went down to below the terrace … & were all photographed by Downey by the new cinematograph process, which makes moving pictures by winding off a reel of films. We were walking up & down & the children jumping about. Then took a turn in the pony chair.

The scenes were delightfully intimate and domestic – a family enjoying at play showing off for this latest novelty. Like other popular media of the period, film presented a very human version of the British monarchy.

Bringing the nation together

Film was equally successful at capturing the grand occasions that were intended to bring the nation together. Royal processions and visits were a great draw for early filmmakers – not only did they guarantee spectacle but their fixed place in the calendar allowed for planning ahead. Victoria’s visit to Sheffield to open the new Town Hall on 21 May 1897 was filmed by the Riley Brothers. This was shortly followed by her Diamond Jubilee on 22 June, the centrepiece of which was a grand imperial military procession through London to St Paul’s Cathedral. The occasion attracted the biggest attendance of the global film industry to date. There were some forty cameramen stationed along the route, working for around twenty commercial firms. Many different short films were taken.

Filmmakers knew that even fleeting images of Victoria were hot property. Pictures had to be developed and distributed as quickly as possible. When Victoria visited Dublin in 1900, one enterprising filmmaker shot scenes and then developed them on the train to Belfast so he could be the first to show them the same evening. After taking pictures of Victoria’s funeral, Cecil Hepworth, a pioneer in British film, was so overwhelmed with orders for prints that he claimed to have worked for eight days and nights with only nine hours off for food and sleep.

For the many who were unable to be at a royal event, watching a replay on a big screen was the closest they could get. Films of Victoria’s Diamond Jubilee and funeral played across the British Empire and well beyond. Her funeral pictures made it into a global news event, watched by audiences around the world. They received showings as far apart as New York, Bombay, Cape Town, Paris, Auckland and Singapore. In Melbourne, funeral scenes were first shown at the Athenaeum on 18 March 1901, six weeks after the occasion. Films would often have been accompanied by patriotic music and songs.

When the Jubilee films were shown in Adelaide, crowds gave sustained applause when the Queen passed by in the procession.

Victoria’s death and funeral might have marked the end of her time being filmed, but it helped cement her popularity as a subject for cinema. Many other films would follow, including Sixty Years a Queen (1913) and Victoria the Great (1937) that were grand retellings of her life and reign.

How many more depictions of Queen Victoria on screen can you think of? How has she been presented on the big screen? Please share your thoughts in the comments box below.