Find out more
Home / Healthcare & Medicine / Control and Elimination of Visceral Leishmaniasis / Who gets ill?

What are the risk factors for VL?
Prof (Dr) Mitali Chatterjee talks about kala-azar risk factors in India.
View transcript
12.3
MITALI CHATTERJEE: So visceral leishmaniasis or kala-azar, as it is more popularly known, is caused by the sand fly, the bite of a sand fly, who takes a blood meal from a suspected case, and transmits the parasite, which is Leishmania donovani, to other unaffected individuals in India and in South Asia - that includes Nepal and Bangladesh. The main transmission is through human to human transmission, so cases of visceral leishmaniasis, along with cases of post-kala-azar dermal leishmaniasis are suspected to be carriers of this disease, and more importantly, visceral leishmaniasis presents with features of fever and enlargement of the liver and spleen.
65
But often in about 10% of these individuals, they may develop a dermal sequel to the disease, which is called post-kala-azar dermal leishmaniasis, or PKDL as it is known. So the distribution of VL is more or less restricted to South Asia, to East Africa, some parts of Brazil, and along with HIV, it occurs primarily in southern Europe. So the main contributor, actually is South Asia, with India, of course, being the major contributor. Along with VL, comes PKDL, and that occurs only in two pockets, which is South Asia and East Africa. But within India, there is a geographical zone, where the cases of VL appear, which are in the districts of Bihar, contiguous areas of West Bengal, Jharkhand, and also Uttar Pradesh.
122.8
So geographically, there is a continuity of all of the areas where visceral leishmaniasis occurs, because that’s where the sand fly thrives, which is the carrier of the Leishmania parasite. So considering the risk factors for VL, probably the most important is living in an area which is endemic for VL. In addition, the important factors we have to keep in mind are individual factors, are household factors, and environmental factors. So in terms of household factors, probably the most important is the housing conditions that these individuals have, because they come from the lowest socio-economic strata. So their housing is often temporary, corrugated tin roofs, with crevices. So easily, there is access for the sand fly to enter into the house.
171.1
In addition, is the cattle density is very high, because they often live with their cattle, which is cows and goats, in very close proximity to where they live. So the sand fly tends to bite cows, followed by that of humans. So here is the perfect setting for the sand fly, which has access to both the cow, as well as humans. And so the disease transmission continues. So household factors are extremely important. The next most important thing is proximity to patients who are suffering or have suffered from VL, because the sand fly, again, can take a blood meal from them.
210.4
So we have observed that, often, if a patient has VL, there are other family members who have also suffered from the disease in reasonably close proximity in terms of geographical location and also time. So these are really the most important factors that are playing a role.

What factors can drive transmission or make people susceptible to getting infected with visceral leishmaniasis?

The graph below summarises some of the risk factors that have been associated with higher levels of infection or outbreaks of visceral leishmaniasis (Alvar, Yactayo & Bern, 2006:p.555) [1].

By focusing control efforts on VL risk factors, programmes aim to break transmission of disease and ultimately reduce the burden of infection. 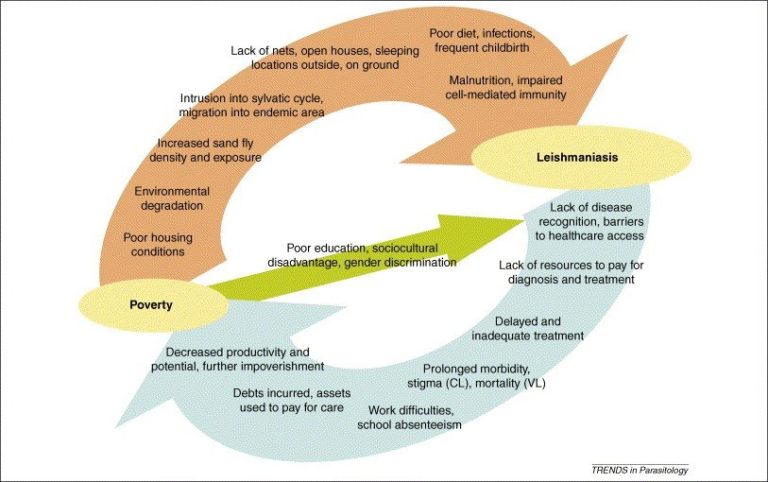 In the following interview with Prof (Dr) Mitali Chatterjee from Post-Graduate Medical Institute in Kolkata, India, listen carefully to spot some of the most common risk factors for VL.