Learn more about how to conduct considerable research in art.

Multi-media artist Adriana Corral, and painter/muralist Audrey Chan each conduct considerable research to gain information and insight into their subject matter prior to creating artwork.

For these two artists and others that will be introduced in this course, research on the subject they are addressing is a vital part of their practice that serves to increase awareness and inform their creative decision-making in an authentic way. Often this is similar to researchers in other fields such as a writer conducting historical research for a novel, or a social scientist gathering data from community residents for a study on public health.

For the series Latitudes, Corral studied the history of the 1948 Universal Declaration of Human Rights and attended the United Nations 106th Assembly on Enforced and Involuntary Disappearances. The Universal Declaration of Human Rights (UDHR) was created in 1948 under the auspices of the United Nations to promote international protections for all people following the atrocities of the Holocaust. 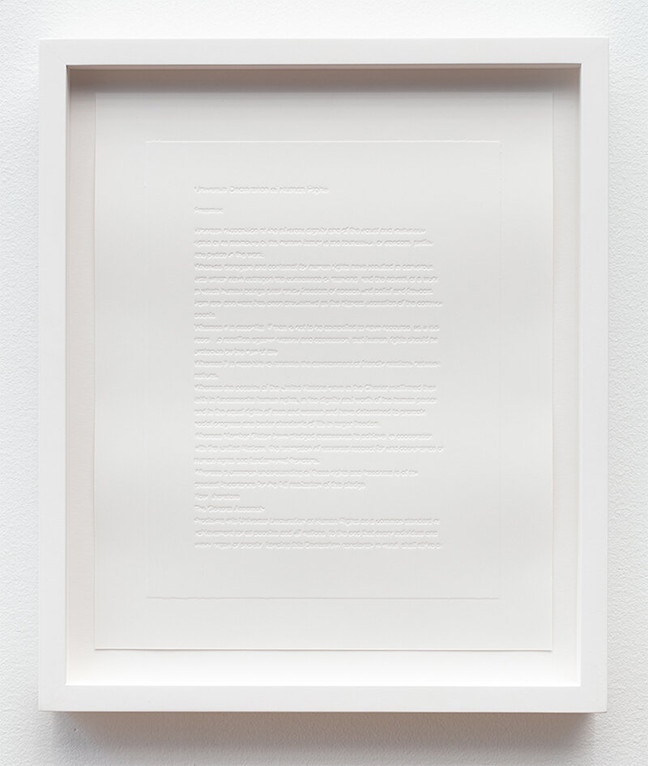 Corral created prints of the UDHR with the ink removed. Viewers seeing them from a distance are confronted with what looks like framed blank pages. While these blind imprints of the text look blank at first, they are in fact either debossed or embossed, so that the text is apparent yet without ink. 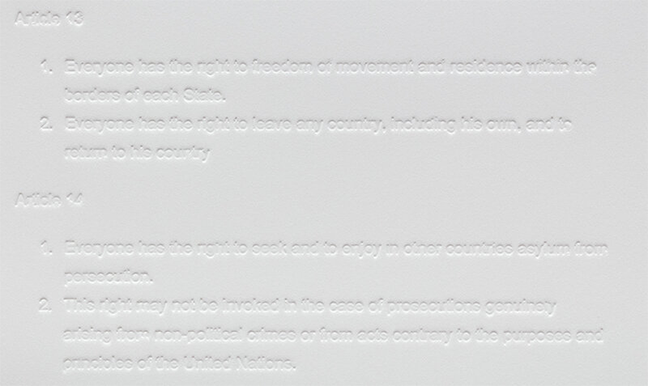 On her website, the artist states: “This process creates a permanent yet subtle impression on the paper—a reference to how this treatise is often ignored. This combination of indelibility and illegibility speaks to the ways human beings are treated and mistreated the world over, and confronts history, violence, loss and memory.”

Hear from artist Adriana Corral in this video from Moody Center for the Arts, Rice University.

Audrey Chan is a Los Angeles-based artist, illustrator, and educator whose research-based projects use drawing, painting, video, and public art to challenge dominant historical narratives through allegories of power, place, and identity. While Artist-in-Residence at the American Civil Liberties Union Southern California, Audrey Chan was commissioned to create a mural on an entire side of the American Civil Liberties Union office building in El Segundo, California.

For the mural, Chan conducted historical research of ACLU activists with ties to Southern California. The colorful mural includes portraits of current residents and historical figures, connecting past and present.

Individuals were selected as portrait subjects for their work on behalf of issues like racial justice, economic and housing justice, immigrant rights, and lgbtq rights. Chan describes the completed mural as a hundred year-long portrait of organizing and activism telling the story of social justice work based in southern California.

Additional goals for the mural were to imagine a better future, to illustrate unity as a community and of caring for each other, and also to create an uplifting space that communicates a powerful, shared message. In order to do this with authenticity as a non-resident of El Segundo, Chan undertook conversations and interviews with locals to learn what they care about, and what kind of images they would like to see. She also researched native plants used in healing and medicine which appear as background imagery in the mural.

Read more about The Care We Create, watch a video interview on the process, or see more of Audrey Chan’s art.