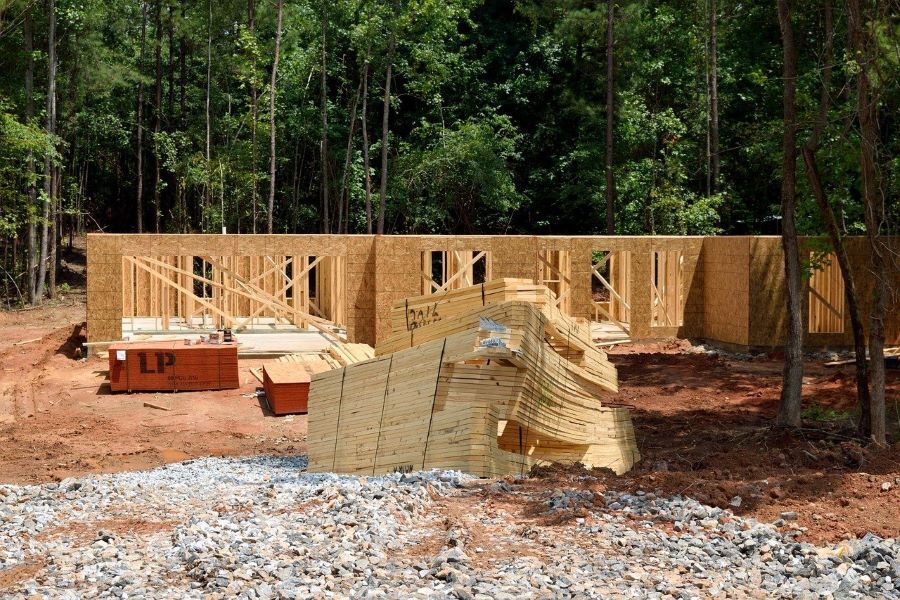 Here are some facts and figures relating to cement, a substance that is widely used in construction to bind other materials together:

Then there’s the waste issue as between 10-15% of building materials are wasted during the construction process, not to mention the difficulty of disposing of construction materials at the end of their natural lives.

Fortunately, there are alternative solutions:

Growing trees capture carbon dioxide and can store it for several decades (it is only released when the wood is burned or decomposes). Forests have relatively short growth cycles and wood is a renewable resource. Any residues generated after the timber has been harvested have the potential to be turned into biomass for energy production or composted.

Find out more: 39 ways to save the planet: Wood for Good.

The woody stem of the industrial hemp plant, also known as the shiv, can be mixed with a binder to create ‘hempcrete’ which can then be cast into blocks or panels. These can be used to make walls, ceilings and roof insulation. Hempcrete is ‘hygroscopic’ meaning that in high humidity conditions it will absorb moisture from the air, releasing it again when the humidity levels drop, allowing buildings to ‘breathe’ and avoiding damp problems. During its growth, the hemp plant absorbs carbon so that even allowing for the production of the binder, transportation and construction, it can be considered to have off-set more carbon emissions than it has produced. In Yorkshire, Hempcrete blocks were used to build an adventure play park.

Find out more about hempcrete.

Biological wastes including wheat straws, bagasses, oat hulls, grapevine prunings and rice husks have the potential to be used to create sustainable, durable construction materials such as green concrete, insulation and reinforcement materials, particleboards and bio-based plastics. Using these materials can also help alleviate the problems associated with traditional methods of disposal such as landfill or burning. We’ll explore agricultural residues in more depth in the next article.

Straw bales can be load-bearing or used to fill a timber frame and rendered with earth or lime. The environmental benefits of using straw bales include the fact that, unlike bricks, they don’t need to be fired. During its growth, the straw will have captured CO2 which will continue to be stored. Straw is also cheap and can be locally sourced. The LILAC cohousing project in Leeds used straw bales and timber in construction of its houses.

Are there any interesting bio-based building projects in your local area? Would you consider using these materials in your own house?