Skip main navigation
Home / Nature & Environment / Sustainability / Bioeconomy: How Renewable Resources Can Help the Future of Our Planet / The value of bread waste

The value of bread waste

Britons throw away an estimated 24 million slices of bread per day. This article discusses the value of bread waste. 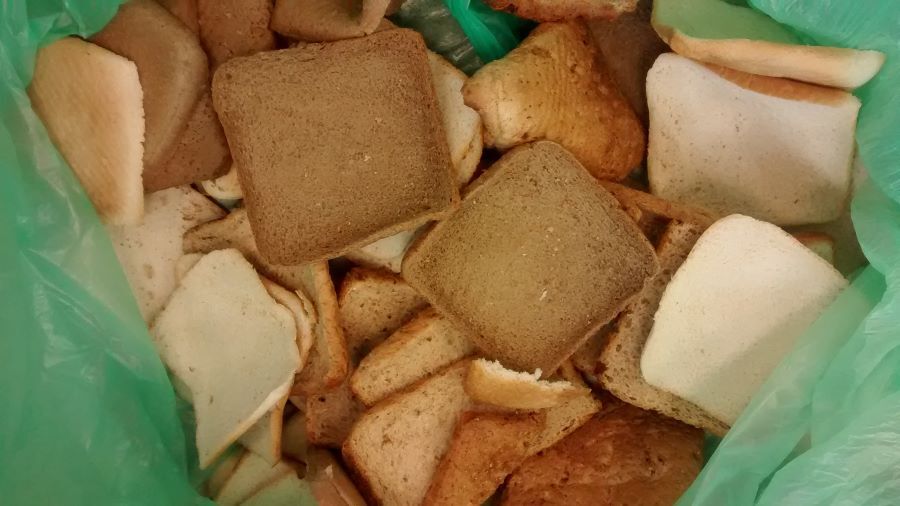 For much of history, bread has been a staple of the human diet.

However, it has a relatively short shelf life and about one-third of all that is produced goes to waste. It is estimated that 1.2 million tonnes of bread are thrown away annually and that Britons throw away 24 million slices per day!

Flour contains starch, which is a carbohydrate made of lots of sugars stuck together. To digest bread, we need to break down the starch into these simple sugars using a process called ‘enzymatic hydrolysis. You can test this hydrolysis reaction out for yourself.

After a few minutes of chewing, the enzymes in your saliva (amylase) start to break down the starch molecules in the bread to sugars, resulting in a sweeter taste.

The value of bread waste

By converting waste bread into simple sugars we can create the basis for using fermentation to make valuable products, such as antibiotics or even beer.

From theory to laboratory

Antibiotics are any substance that can destroy or inhibit the growth of bacteria and similar microorganisms. Antibiotics are produced industrially by a process of fermentation, where the source microorganism is grown in large containers (100,000 – 150,000 litres or more) containing a liquid growth medium.

One of the main constituents of liquid growth medium is glucose, simple sugar and the preferred energy source of many microorganisms.

GlaxoSmithKline (GSK) is one of the world’s largest pharmaceutical companies and one of the main ingredients they use at their production sites is food grade glucose.

The price of food-grade glucose varies a lot which is a problem for GSK, three years ago they embarked on a search for a more sustainable supply and asked the Biorenewables Development Centre to help them.

Together, they identified potential new sources of glucose from food manufacturing, using starchy by-products such as bread and potato wastes as a starting material.

Following successful trials at the BDC, they are now exploring significant opportunities to scale this process up to a commercial level. To make the most out of the starting material, including the protein-rich residue, the BDC has also brought additional partners into the project.

This project is building a more sustainable and economically beneficial supply and could ultimately result in turning food by-products into high-value products.

From waste bread to award-winning beer

Toast Ale use surplus fresh waste bread to make beer. According to their website:

We use surplus fresh bread to replace one-third of the malted barley in our grain bill. Bread is packed with carbohydrates, which are broken down to simple sugars by enzymes (Amylase) in the barley. Hops are added for aroma and bitterness, and to help preserve the beer, then yeast converts the sugars to alcohol during fermentation.

We use the heel end of loaves that would usually be discarded by the sandwich industry. We work with large factories like Adelie Foods in the UK. They donate and deliver the bread to us at no cost because it avoids a waste cost and they can have a positive impact – it’s win-win! For our collaborations, we also use surplus bread from local bakeries.

Toast Ale aren’t the only brewery using waste streams. Seven Bro7thers Brewery in Manchester uses “upcycled” cornflakes to make their Throw Away IPA and you can even buy a beer made out of purified wastewater!

If you’d like to learn more about helping the future of our planet, check out the full online course from the University of York, below.