Identify the factors of production and explore how they work together to make a simple economy.
© Coventry University. CC BY-NC 4.0

The key resources found in an economy are:

If you look around your environment, you should be able to visualise each of these factors of production. 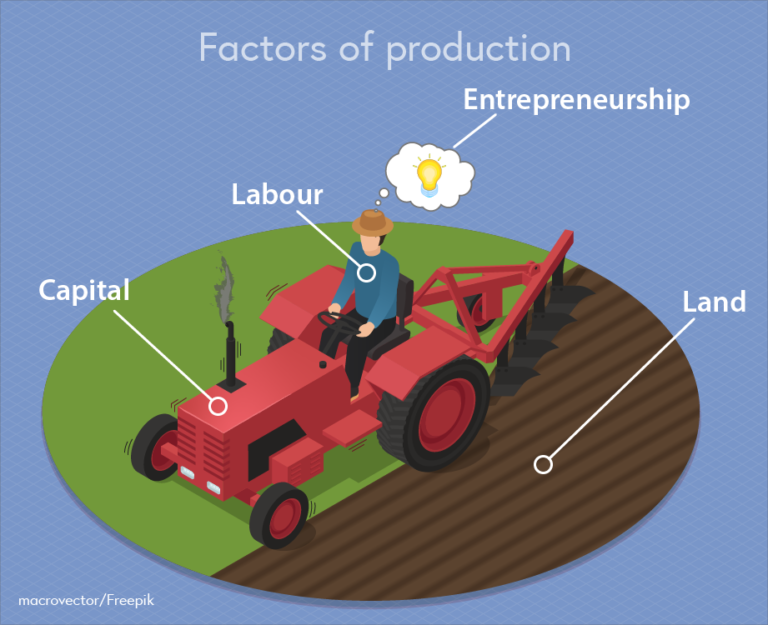 Land takes the form of the earth that we walk every day. It includes anything that grows, such as food and wood. The oceans and what lies beneath the ground is also classified as land. Minerals such as coal, gold, oil, natural gas and other compounds are examples of land, as are resources found in the oceans and extracted from the air.

Capital consists of resources that are used to make other products. Tools and machines that manufacture complex products are examples of capital. Money is included in capital, as it enables tools and machines to be created. Roads, ports and other logistics infrastructure is known as national capital, especially if paid for by governments.

Labour, or human resources, are the humans who operate the tools and resources, work on the land, and whose mental and physical efforts transform resources into a product.

Entrepreneurship is the creative ability to combine land, capital and labour to develop new products and services that people in society are prepared to purchase. There is an element of risk-taking in entrepreneurship, as it’s difficult to be certain whether those new products will be popular, or whether anyone wants new products. The economy is littered with examples of failed enterprises.

In addition, just getting new products to retail locations where consumers can try and buy them requires a huge expense of scarce resources, an effort which might not be rewarded by profit, but losses.

Discuss how your employer, or one you are familiar with, utilises factors of production to create their goods or services. Write a short description in the comments area, making sure you use the four key terms (land, capital, labour and entrepreneurship) for the factors.