In this article, Dr Céline Redard explains some Avestan sentences like "the horse eats". 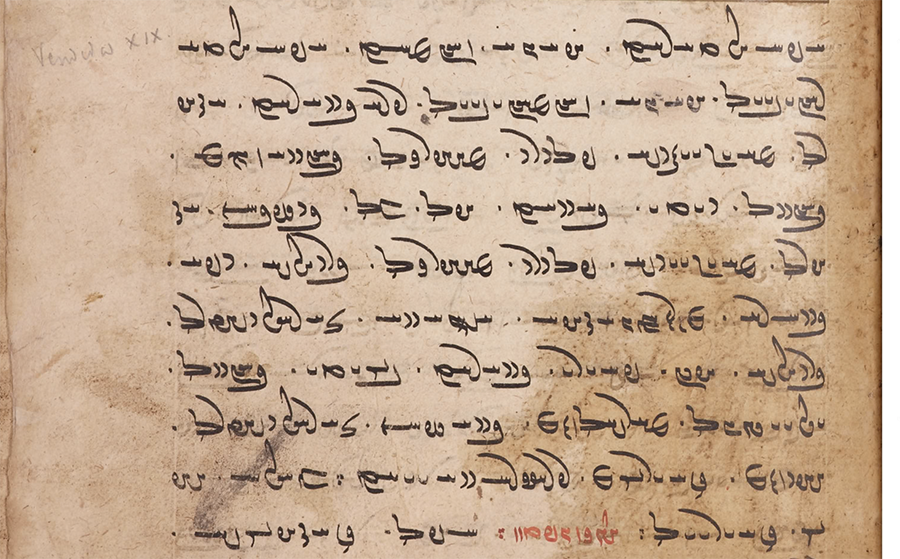 The first sentence tells us that Aŋra Maińiiu, the demon of the demons, full of destruction, comes from the North and wants to destroy Zaraϑuštra.

Let’s look together at a short, adapted extract from V19.1:

Avestan does not need an article ‘a, the’, hence daēuuō means ‘the demon’ or ‘a demon’.

View Course
In English, the function is defined by the place of the term within the stanza and / or a preposition like ‘to, at, with’. How does it work in Avestan? Like German, Latin or Greek, Avestan has the notion of case. The nouns have a basic form called stem, recorded in modern dictionaries, which carries the meaning: for example daēuua– ‘demon’. The stem is usually followed by a dash. To define the function of the noun within the stanza, Avestan uses specific endings added to the stem. daēuuō, coming from *daēuua-s, is the nominative singular of daēuua– ‘demon’. The nominative is used to express the subject of the sentence.
In English a verb is usually given with the infinitive form in a dictionary: ‘to run’, ‘to eat’, etc. In Avestan, this corresponds to what is called the root, for example xᵛar– ‘to eat’. fraduuaraiti is a verbal form from the root duuar– preceded by the preverb fra”, ‘to run (forth)’. In a dictionary, the root is followed by the indication of the present stem: *duuar-, present stem duuara-. fraduuaraiti is the 3rd person singular present, indicated by the ending –ti. The ending has been added to the present stem, that needs to be memorised. Personal pronouns exist in Avestan, but they are not necessarily expressed as they are included in the verbal form, hence fraduuaraiti means ‘he/she runs forth’.
In this step, we learnt that the nominative singular of an a-stem ends in –ō and the 3rd person singular of the present ends in –ti. The explanations provided might seem difficult if it is the first time you learn an old language. Do not hesitate to read them more than once as they contain several uncommon technical terms, and the language looks very different from English. The aim is not to remember everything, but to try to grasp the general structure. To help you memorising what has been explained, let’s have a look together at similar sentences.

Here is the first sentence we will look at:

We have not seen these terms yet, but we can guess which term is at the nominative case, and hence is the subject of this sentence. As previously, the nominative ends with –ō. Thus, maṣ̌iiō is the nominative singular and it comes from maṣ̌iia– ‘man’. The second term jasaiti comes from the root gam– ‘to come’ and thus means ‘he/she comes’. Here, we see that the root and the present form are not exactly similar, hence are usually provided in a dictionary a root and its present stem: gam-, present stem jasa-. Altogether, maṣ̌iiō jasaiti means ‘a man comes’.

As previously, the vocabulary is new. However, we should be able to recognise which term is the verb. We learnt that –ti is the ending for a 3rd person singular present, hence xᵛaraiti must be the verb. xᵛaraiti means ‘he/she eats’ and comes from the root xᵛar-, present stem xᵛara– ‘to eat’. aspō is the nominative singular of aspa– ‘horse’. aspō xᵛaraiti means ‘the horse eats’.
Finally, let’s analyse together the following sentence:

zaraϑuštrō looks familiar as we have seen it in step 4.5 when we practiced the letters. This term comes from zaraϑuštra-, the name of the prophet. Here, with the ending –ō, it is a nominative singular, and it acts as the subject of the sentence. So, what does Zaraϑuštra? The verbal form pǝrǝsaiti comes from the root fras-, present stem pǝrǝsa– ‘to ask (a question)’. The ending –ti is used for the 3rd person singular present, which provides the following meaning ‘he/she asks (a question)’. The meaning for the sentence is ‘Zaraϑuštra asks (a question)’.

If you feel comfortable, you can try to guess the meaning of the following sentence
maṣ̌iiō xᵛaraiti
and share it in the discussion below. You can also share your feeling after this first step with us.

When learning a new language, vocabulary is the key. It usually requires repetition to remember a term and writing down the vocabulary on a piece of paper might help the learning process. Do not hesitate to write in a column the term and its translation in another column, or do that with flashcards. For example: