Editorial reporting: Australia pours millions into extra university places
THE, 30 September
The Australian government has pledged hundreds of millions of dollars in aid for its higher education sector, which faces huge financial losses from Covid-19. Dan Tehan, the education minister, announced on Wednesday that A$326 million (£181 million) would be given to create an additional 12,000 university spaces for Australians. That would come on top of a potential 18,000 new spaces created if the “Job-Ready Graduates” bill is approved, although there has been fierce debate in a Senate committee about the proposed legislation. An economic recovery will be built on an educated and highly skilled workforce,” Mr Tehan said.

Feature: Universities can be allies in confronting racism
WonkHE, 1 October
In this feature article, Shaminder Takhar, Associate Professor of Sociology at London South Bank University, suggests that universities can act as valuable allies to the Black Lives Matter movement, but this demands action and accountability from the sector. She states that universities can move forward by acknowledging that racism and white privilege operate at both individual and institutional levels. This allows them to adopt an institutional strategic anti-racist approach that can challenge and inform government policymaking. She also states that universities should go beyond implementing unconscious bias training and move towards, anti-racism training.

New research: Sudden shift to online learning revealed gaps in digital literacy, study finds
EdSurge, 1 October
A new survey across 40 states in America has found that the majority of students and teachers lack adequate tech training or knowledge. The survey revealed that a number of students and parents don’t have the digital literacy to join  Zoom calls and collaborate in shared Google Docs. Heather A. Pacheco-Guffrey, an associate professor of science education at Bridgewater State University who led the survey effort stated that “American kids and families are great at consuming tech, but not great at creating with technology,” and that this “has huge ramifications for teacher preparation across the country,”.

Feature: Identifying talent: the impact of digital education
Education Technology, 23 September
This feature piece compares traditional teaching methods to online teaching. It argues that the practice of teaching has not changed for centuries: teachers teach, students take notes and do their best to keep up, and in this regard, technology can greatly enhance students’ learning experience while boosting their intellectual growth. It also suggests that peer to peer learning is uniquely suited to the digital realm and could in fact revolutionise the teaching profession. It concludes that digital education opportunities certainly add valuable resources to teachers’ arsenal and enrich students’ learning experiences but in-person learning offers advantages that simply cannot be matched by technology.

Feature: The moment is primed for asynchronous learning
Inside Higher Ed, 16 September
In this feature article, experts in online learning argue that asynchronous learning is a valuable tool – especially in the current climate – but, it needs to be done in a thoughtful way to help students succeed. Sean Morris, Senior Instructor of Learning Design & Technology at the University of Colorado, argues that “it’s up to faculty members to build their presence when using asynchronous learning styles. They can do this with videos welcoming students to a new week, sending announcements via video or reaching out individually to students”. Jennifer Mathes, CEO of the Online Learning Consortium, states that “faculty need training and professional development to learn strategies and improve their online teaching”. “While that could mean more time, money and effort for colleges, it’s worth it, because asynchronous learning can increase college access” Morris adds.

Opinion: Universities must embed digital for the long term
WonkHE, 15 September
In this opinion piece, Sarah Knight, Head of Data and Digital Capability at Jisc, argues that universities must build a long term strategy to help students and staff develop digital capabilities. She claims that it’s not about translation – shifting face-to-face methods into an online environment – but transformation – building digital into course and assessment design and the student experience. To achieve that, universities will have to work in partnership with their students, asking questions about their digital experiences, listening to feedback, and rethinking approaches and support in response. 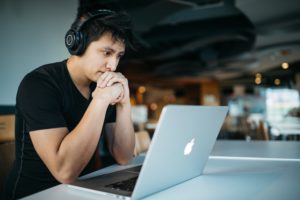