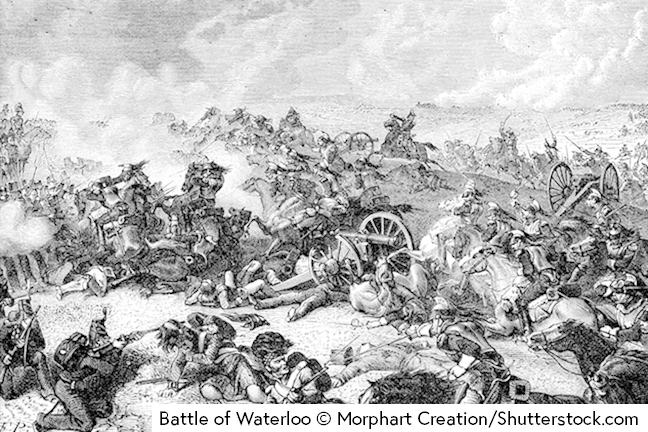 The Battle of Waterloo

In this article, Dan considers the connections between the battles of Agincourt and Waterloo.

Four hundred years after the battle of Agincourt, another famous victory over a French army took place on 18 June 1815 at Waterloo, some 200 kilometres from where the battle of 1415 had been fought.

The earliest excavations carried out at Azincourt were carried out by British soldiers in the aftermath of Waterloo. These were undertaken at the order of Lieutenant Colonel Woodford, a veteran of the battle of Waterloo, who was serving as a quartermaster-general in the Army of Observation in the Calais area. In 1817 he purchased land on the presumed site of the battlefield and carried out excavations from 20-28 February and 11-20 March 1818. A number of objects thought to be recovered from the excavations were taken back to England but none of these have survived, possibly due to their destruction in a fire of 1874, although a plan of the battlefield drawn up by Woodford, dating from 1818, is now held at the British Library (BL Additional Manuscript 16368 map C).

Other officers stationed in the area also invoked the memory of the battle of 1415. Medals for Waterloo service were even presented on the field of Agincourt on 17 May 1816. Witness the account of John Gordon Smith (1792-1833), a Scottish surgeon attached to the 12th (Princes of Wales) Light Dragoons in 1815 (given in Endell Tyler, 1838). Smith also provides a description of the topography of the area:

‘Perhaps I may be pardoned for relating that I had the honour to receive a Waterloo medal on the field of Azincour, or rather, that I had the fortune to belong to one of the British regiments that signalized themselves in the campaign of 1815, and which afterwards was invested with the above-mentioned mark of their sovereign’s approbation on the very spot which, nearly four hundred years before, was the scene of the scarcely less glorious triumph of Harry the Fifth of England. In 1816 a portion of the British army was cantoned in the immediate neighbourhood of this celebrated field, and the corps in which I then served made use of it during several months as their ordinary drill-ground… We amused ourselves with reconnoitring excursions, comparing the actual state of the localities with authentic accounts of the transactions of 1415. The changes that have taken place have been singularly few, and an attentive explorer would be able to trace with considerable accuracy the greater part of the route pursued by the English army in their retreat out of Normandy towards Calais. The field of Azincour remains sufficiently in statu quo to render every account of the battle perfectly intelligible; nor are those wanting near the spot, whose traditionary information enables them to heighten the interest with oral description, accompanied by a sort of ocular demonstration.

Azincour is a commune or parish consisting of a most uninteresting collection of farmers’ residences and cottages, once however distinguished by a castle, of which nothing now remains but the foundation. The scene of the contest lies between this commune and the adjoining one of Tramecour, in a wood belonging to which latter the King concealed those archers whose prowess and vigour contributed so eminently to the glorious result. Part of the wood still remains; though, if I remember rightly, at the time of our visit, the corner into which the bowmen were thrown had been materially thinned, if, indeed, the original timber had not been entirely cut down, and its place been scantily supplied by brush or underwood. Some of the trees, however, in the wood of Tramecour were very old in 1816.

The road above mentioned is the great post-road; the old road, now degenerated into a mere cart-track, from Abbeville to the once celebrated city of Therouanne, passes over the scene of action, and must have been that by which the French army reached the ground before the English, who had been compelled to make a great circuit.’

When the duke of Wellington was thanked in the Commons for his victory at Waterloo, Sir Thomas Ackland declared, ‘we saw renewed the splendid days of Cressy and Agincourt’ (The Morning Post, 24 June 1815), and the Lord Mayor’s Day in November 1815 (the forerunner of today’s Lord Mayor’s show), celebrated both the victory of Agincourt and of Waterloo.

‘It was a happy coincidence which reminded us at the same instant of two of the most distinguished epochs in British history, which at once made us exult in former triumph and present glory by placing in the forefront of this national picture the valued relics of Agincourt with the honoured trophies of Waterloo.’ (The Morning Post, 10 Nov. 1815)

Endell Tyler, J. ‘Henry of Monmouth: or, Memoirs of the life and character of Henry the Fifth, as Prince of Wales and King of England’, Volume II (London, 1838), p. 57