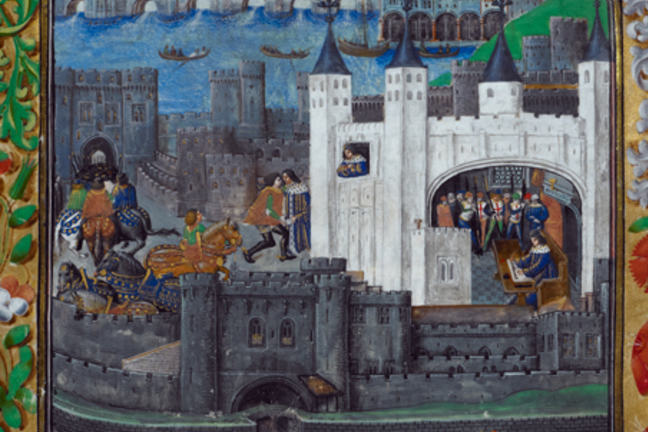 The Tower of London with the Duke of Orléans as a prisoner inside.

© British Library Board. From ‘Poems’ by Charles, Duke of Orléans (c.1483). Made available under the Creative Commons CC0 1.0 Universal Public Domain Dedication

Killing of the prisoners

In this article, Dan describes the killing of many of the French prisoners and explores Henry’s reasons for doing this.

For modern observers, one of the best known and most notorious events during the battle of Agincourt is the massacre of at least some of the French prisoners by their English captors at the end of the first phase of fighting. These men had been taken captive after being defeated in the melee.

When fighting ceased the king ordered his men to search the heaps of dead for further possible prisoners. By this time, such captives had a clear expectation that they would be ransomed by the victorious English. The capture of prisoners for ransom was a well established principle by the early fifteenth century, with high ranking captives being especially sought after. The most notable earlier example in the Hundred Years War is the capture of the French king John II, at the battle of Poitiers in 1356. John was brought to England and his large ransom – enough to remove the need for direct taxation for several years - formed part of the treaty of Brétigny of 1360 which gave Edward III substantial lands in south west France in full sovereignty.

The potential financial gains that could be made from the ransoming of high ranking and wealthy prisoners was a powerful incentive for soldiers to serve in this period. The English Crown also stood to benefit from this process. Following established procedures, the indentures for the 1415 campaign specified that the king was entitled to a third of the ransoms. Captains would also be entitled to a share of the ransoms gained by troops under their command. Any high ranking prisoners were to be handed over to him in return for the captor being given some compensation.

Therefore on the face of it, it would seem counter-intuitive for a commander to order the killing of prisoners since he was depriving himself as well as his soldiers of potential income. The key to understanding the event lies in Henry’s fears that the French were intending a new attack. His own army was no longer in battle array therefore he had to take drastic action.

According to the author of the Gesta Henrici Quinti (The Deeds of Henry V) the killings occurred because ‘a shout went up’ (Curry, 2009, p.37) amongst the English that the French were reforming to launch another attack. This was said to have resulted in the deaths of almost all of the prisoners, except those of the highest rank, to prevent them from taking up arms against their captors in the confusion of fresh fighting. The fear of a French attack is the reason given in almost all other chronicles, whether English or French, although there is some variation on who was leading the new attack. There is also some vagueness on whether any negotiations occurred. In some accounts there is a suggestion that Henry sent a herald to the French. In others, the French see the killing and therefore decide not to attack again. Only one account, that of the French chronicler Pierre de Fenin attributes the massacre as a reaction to a French attack on the English baggage train.

A detailed account of what happened is provided by Ghillebert de Lannoy, lord of Willerval, who was taken prisoner at the battle. He was 29 years old at the time and was from the area, with lordship being in the Pas-de-Calais 31 miles to the south-east of Azincourt. Lannoy was chamberlain to Philip, count of Charolais, the eldest son of John the Fearless, duke of Burgundy. Both of these men were not present at the battle but many of their followers did fight in the French ranks. His testimony states that:

‘In 1415 I was at the battle of Ruisseauville where I was wounded in the knee and the head, and I laid with the dead. But when the bodies were searched through, I was taken prisoner, being wounded and helpless (impotens), and kept under guard for while. I was then led to a house nearby with 10 or 12 other prisoners who were all wounded. And there, when the duke of Brabant was making a new attack, a shout went up that everyone should kill his prisoners. So that this might be effected all the quicker, they set fire to the house where we were. By the grace of God, I dragged myself a few feet away from the fire. There I was when the English returned, so I was taken prisoner again and sold to Sir John Cornwall, thinking that I was someone of high status since, thank God, I was well accoutred when I was taken the first time according to the standards of the time. So I was taken to Calais and thence to England until they discovered who I was, at which point I was put to ransom for 1,200 golden crowns (écus) along with a horse of 100 francs. When I left my master, Sir John Cornwall, he gave me 20 nobles to purchase a new suit of armour (harnas).’ (Potvin, 1878, pp 49-50)

We know that the duke of Brabant arrived late for the battle, so this account is credible. A number of other French prisoners were not killed, such as the major prisoners, headed by Charles, duke of Orléans. He was kept prisoner in England for twenty-four years, which included a stint in the Tower of London. Altogether it has been possible so far to identify 320 prisoners taken alive and ransomed. Only the most prominent prisoners were taken back to England and held until their ransoms could be paid, which included Charles, duke of Orléans (a nephew of Charles VI); Jean de Clermont, duke of Bourbon; Louis de Bourbon, count of Vendôme; Charles of Artois, count of Eu (all three of royal descent); Arthur of Brittany, count of Richemont (brother of the duke of Brittany); and the marshal of France, Jean II le Meingre, called Boucicaut.

How many others were killed as a result of Henry’s order cannot be known. The killing of prisoners is not unique to Agincourt. It is notable that no contemporary commentators criticised Henry for his action at Agincourt. It was seen at the time as an action generated by military necessity.