The Family Idols of Pomare

Pomare II was a prominent chief in Tahiti. He converted to Christianity in 1815, within twenty years of the London Missionary Society’s arrival (in 1796).

Pomare II’s engagement with the missionaries was influenced by political motivations. Traditionally the Pomare family asserted whakapapa (genealogy) as the descendants of the atua (god) O’ro, but challenges of famine and disease saw increasing dissatisfaction. Pomare’s growing ambition to become ari’i rahi (paramount chief) of the islands faced resistance from other chiefs, resulting in conflict. Christianity had become a proposition with benefits and there was value in pursuing relationships with the influential foreign missionaries.

In February 1816, Pomare II sent a letter that accompanied a collection of Tahitian ‘idols’. These became known as The Family Idols of Pomare. 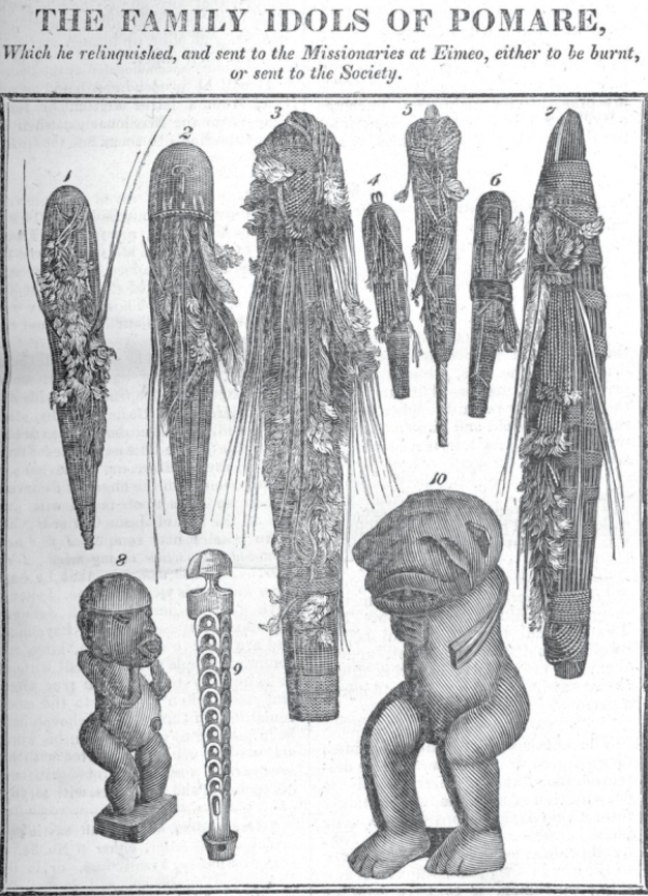 ‘The Family Idols of Pomare’, image from the cover of Missionary Sketches no. 3, October 1818. © Council for World Mission / soas (cwml l50).

‘Friends… I wish you to send those idols to Britane, for the Missionary Society, that they may know the likeness of the gods that Tahiti worshipped… If you think proper, you may burn them all in the fire; or, if you like, send them to your country, for the inspection of the people of Europe, that they may satisfy their curiosity, and know Tahiti’s foolish gods!’ [1]

They were first received by Reverend Samuel Marsden in New South Wales, Australia (October 1816) to be sent on with a note that exclaimed delight in forwarding ‘The Idol Gods of Otaheite’, ‘as glorious spoils of Idolatry’ to the directors of the London Missionary Society.

This would not be the only consignment sent by Pomare II who would write again to Rev. Thomas Haweis in October 1818, confirming that apart from the fans and small ‘idols’ within the consignment, that all other ‘idols’ in his possession had been destroyed.

The objects sent by Pomare II to Britain were tapu (sacred) and held mana (prestige), in particular with the tahiri (fan / flywhisk), which is made from whale bone (an embodiment of Ta’aroa, the atua, or god, of origin, visually representing genealogy and creation).

According to Dr Maia Nuku, the Associate Curator for Oceanic Art at the Metropolitan Museum in New York, the presentation of such artefacts was more significant than proof of religious conversion.

‘‘The Family Idols of Pomare’ operated as an effective means of binding LMS directors to the genealogical network of the Pomare dynasty in Tahiti… the long-distance presentation of tapu (sacred) artefacts was consistent with protocols of exchange throughout Polynesia… it created a debt and enhanced the status of the giver, as material expressions of the reciprocal obligations between partners in exchange.’[2]

The decision by Tahitian Chief Pomare II to convert to Christianity (1816), and the significance of the idols sent to Britain, would see missionary practices change focus within the Pacific. The future collection of ‘idols’ as missionary trophies would become a normal activity and bring into question the agenda and practices of the London Missionary Society in the selective destruction, confiscation and monetising of cultural objects from the Pacific.