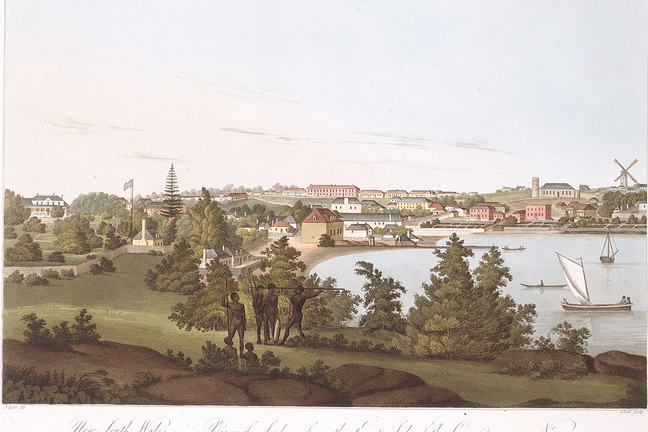 New South Wales, view of Sydney from the Eastside of the Cove, No 1, made in 1810

When he gave evidence to the House of Commons, Joseph Banks spoke about the small number of inhabitants he believed to be living in Australia.

“he apprehended there would be little Probability of any opposition from the Natives, as, during his Stay there in the Year 1770, he saw very few and did not think there were about Fifty in all the Neighbourhood, and had Reason to believe the Country was very thinly peopled” [1]

As we learned in Week 2, Cook was advised to only take possession of land if it was empty, or he had the consent of the inhabitants. Without the consent of the inhabitants, it was convenient to present the land as empty, or Terra Nullius (nobody’s land). This myth allowed the British to justify legally the sending of the First Fleet and the invasion/colonisation of Australia.

Language is important for framing how we remember and present events. Read this article by Peter Kilroy which considers Terra Nullius and the importance of language in how we frame events.

The consequences of Terra Nullius, the arrival of the First Fleet and subsequent British colonisation of Australia are far reaching and we are unable to interrogate them comprehensively within the scope of this course. Instead we will attempt to give an overview that is by no means exhaustive.

Partly because of the myth of Terra Nullius, figures for indigenous inhabitation of Australia vary. Numbers are unclear, but there is largely consensus that the indigenous population was annihilated by the arrival of Europeans. Some sources suggest that between the arrival of the First Fleet in January 1788 and 1900 the population fell by approximately 87%.[2]

“…the small-pox raged among them with great fury and carried off vast numbers of them. Every boat that went down the harbour found them lying dead on the beaches and in the caverns of the rocks.” [3]

European settlement on land meant that communities could not feed themselves, or follow their ritual practices, and resistance to European invasion of lands was often met with violence and massacres.

The decimation of the population led to government policies that considered Indigenous Australians as a ‘dying race’, and that the best approach was to encourage ‘assimilation’. [4] The the Aborigines Protection Act in 1909 saw Indigenous children forcibly removed from their families. The policy was in place until 1969. [5] The children are known as the ‘Stolen Generations’.

The use of Indigenous language and cultural practices were forbidden.

In 1992 the High Court of Australia rejected the legal concept of Terra Nullius. In the case Mabo and Others v. Queensland (No.2), now largely known as the Mabo decision, the court recognised Indigenous rights to land. [7]

Today different groups and organisations continue to campaign and raise awareness about Indigenous culture and the legacies of the invasion/colonialism. Look at the See Also section below for more information on these.