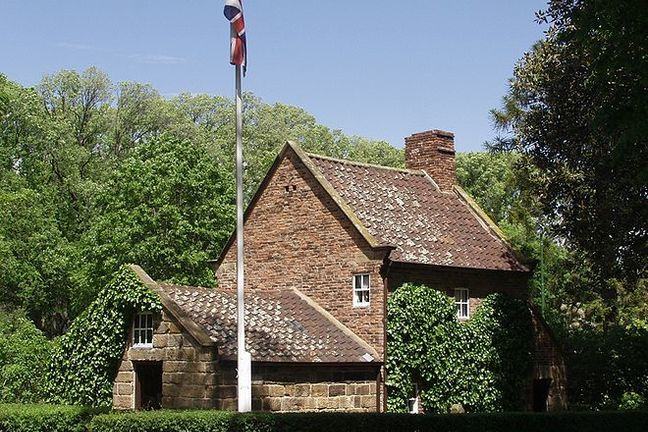 By the first centenary of Cook’s death (1879), monuments in Australia consisted of an obelisk (Liverpool, NSW), a pedestal (Hyde Park, Sydney), a water-fountain (Victoria)[1] and a plaque (Botany Bay).[2] From the 19th century individuals and small groups embraced and promoted Cook as the ‘founder’ or ‘discoverer’ of Australia. They used their wealth and influence to ensure that Cook became part of the Australian landscape and national identity.

In 1822 the 12 members of the Philosophical Society of Australia (PSA) placed a plaque in the cliff at Botany Bay.

“A.D. 1770. Under the auspices of British Science – these shores were discovered by James Cook and Joseph Banks – the Columbus and Maecenas of their time. This spot once saw them ardent in their pursuit of knowledge; now to their memory this tablet is inscribed in the first year of the Philosophical Society of Australia.”

The location of the plaque was based on the testimony of a local indigenous Australian whose name was not recorded as part of their interrogations. [3]

In 1863, the Australian Patriotic Association (APA) attempted to arrange for a Cook-associated public holiday on 28 April, the day Cook landed in Australia. The occasion was rained off and had to be postponed until the following year. In 1864 the APA decided that the PSA had been mistaken in their identification – or the identification by the indigenous Australian man – of the original landing spot, and instead selected a location about a kilometre along the coast.

Thomas Holt commissioned an obelisk to stand on the ‘correct’ landing site (at Kurnell). The obelisk was unveiled in 1870 with the following inscription:

We discovered a bay and anchored under the south shore about two miles within the entrance in six fathoms water, the south point bearing S.E. , and the north point E. Latitude 34’ S. Longitude 208’ 37’W.”

The APA then began campaigning for a statue.[4]

The first statue of Cook in Australia was commissioned and paid for by Captain Thomas Watson, a member of the APA, he owned whaling ships and his home was known as ‘Cook’s Lodge’. The statue was placed in the suburb of Randwick, New South Wales, in 1874. [5] 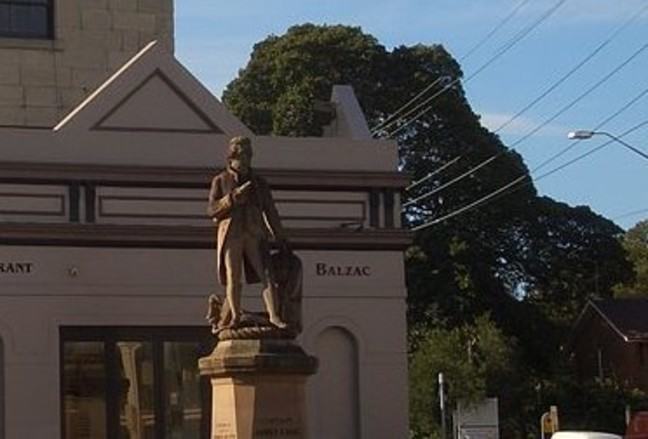 In the 1860s the Australian Patriotic Association began campaigning for a statue of Cook to stand in Sydney’s Hyde Park. The foundation stone was laid in 1869, but it was 1879 before the statue was unveiled. Despite efforts to raise public contributions, public donations contributed to around a quarter of the cost, the rest was given by the government. The unveiling ceremony was a public holiday, drawing crowds of around 70,000. [6]

The unveiling in Hyde Park was attended by Joseph Carruthers, then eleven years old, who would grow up to be a politician and the Premier of New South Wales (1904 –1907). Carruthers seems to have been a tireless Cook promoter. As land minister he was granted 100 hectares of land for a park to commemorate Cook. Annual anniversary celebrations were to be held at the site at Kurnell, New South Wales. In 1908 he wrote to The Times of London to complain that there was no statue of Cook in London, and he urged the Hawaiian government to recognise Kealakekua Bay as the site of Cook’s death and to erect a monument. He wrote a book, published in 1930, titled Captain James Cook, R.N. One Hundred and fifty years after.

Perhaps one of the strangest examples of Cook commemoration is the story of the cottage. In 1938 Russel Grimwade, a scientist and business owner, purchased a cottage in Great Ayton Yorkshire. The cottage was advertised by the agents as “a Five Roomed Brick and Stone Built Cottage… Renowned as the Home of Captain Cook’s Early Days”. [10]

Grimwade paid for the cottage to be dismantled brick by brick, and for each part of the cottage, including the foliage creeping on the outside walls, to be shipped to Australia and faithfully reconstructed in Fitzroy Gardens in Melbourne. He wrote:

“It was to introduce some solid reminder of the old world to this young country that first stimulated me to bring out the cottage and to endeavour to foster national traditions that must necessarily be absent in so young a country as our own.”[11]

It transpires that the cottage was not the boyhood home of James Cook, and that, at best, he may have visited before departing on the Resolution/Discovery expedition. [12]

In 1970 the cottage became the scene of protests. Indigenous Australians rallied, calling for land rights they held a vigil under banners that declared Cook an invader.[13]

The 1888 centenary of the arrival of the First Fleet used Cook as a founding figure, and by 1901 Cook was appearing on the celebratory souvenir material for the 26 January, known as Australia Day for settler populations, with anniversary re-enactments were being staged. This started to establish a myth that persists to this day, linking Cook to 26 January.

Throughout the 20th century, commemoration of Cook in Australia continued to escalate, and in 1970 the Premier, Sir Robert Askin, promised ‘one of the greatest pageants ever held in the Southern hemisphere’ for the bicentenary of Cook’s arrival in Australia. [15]

There were bicentennial marathons, walkathons, talkathons, an air race from England to Sydney for light aircraft, a golf tournament, a boy scouts’ jamboree, a motor racing grand prix and a massive restaging of the arrival of the Endeavour…” [16]

The re-enactment of the arrival of the Endeavour was attended by Queen Elizabeth II. Actors and naval ratings made up the crew. Indigenous Australian actors speared a sting ray that was specially guided towards them by divers. More than 50,000 people were present for the spectacle, some walking eight kilometres as traffic jams stopped their cars.

Further down the bay Indigenous Australians threw funeral wreaths into the bay, hoping that they would float towards the Royal party. [17]

There were also permanent additions to the landscape.

“…Cook parks, Cook libraries, Cook playing grounds, Cook fountains. In New South Wales these were partly paid for by a $400,000 grant from the government for ‘works of a permanent nature’ to mark the event in 1970” [18]

In 1988 work was begun on an exact replica of the Endeavour. The ship was completed in 1993 and embarked upon several voyages, including two circumnavigations of the world. In 2011 the Endeavour circumnavigated Australia, something the original ship never did. [19]

In later steps we will look at what’s planned for the 250th anniversary of the Endeavour’s arrival in Australia.