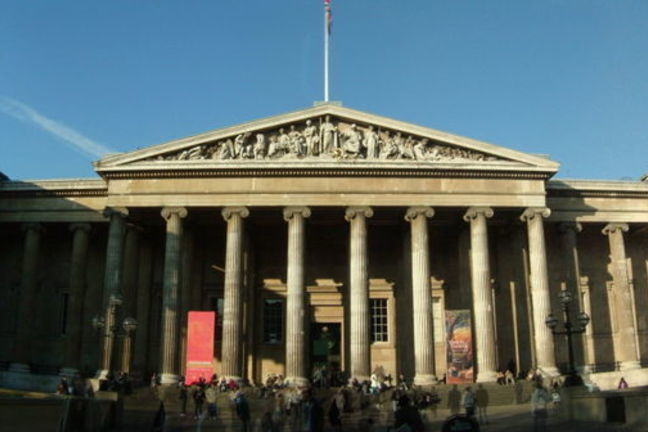 The encounters between Pacific Islanders and Europeans during the voyages led by Cook are introduced through images and objects in the display, some of which were collected on the voyage, but the exhibition also includes 14 works by contemporary Pacific artists that represent Pacific perspectives on the memorialisation of this figure. Eight of these were acquired by the museum specifically for the display, significantly meaning that works offering a challenge to the traditional narrative are now a part of the Museum’s collection for the nation.

The exhibition is the result of collaboration between Pacific artists, researchers, curators and British Museum staff and is separated into seven different places where Cook is remembered or discussed to this day. Each section seeks to address ‘accepted truths’ about the voyages and their impact.

The question of memorialisation of figures over time is directly addressed in the display through the inclusion of posters from the last three exhibitions on Cook held at the British Museum. The earliest uses an ethnographic image of Tahitian figures on a boat as its lead image, while the next reproduces an eighteenth-century artistic representation of Cook’s death that plays into the narrative of Cook as a benevolent explorer.

The final example is the poster for the current exhibition, for which the lead image is Cookie in the Cook Islands. In this painting Michel Tuffery, an artist of Samoan, Tahitian and Cook Islands descent, considers not only the impact of Cook on the Pacific, but also the impact of the Pacific on Cook.

The exhibition ‘Reimagining Captain Cook: Pacific Perspectives’ runs from 29 November 2018 to 9 August 2019 at the British Museum.