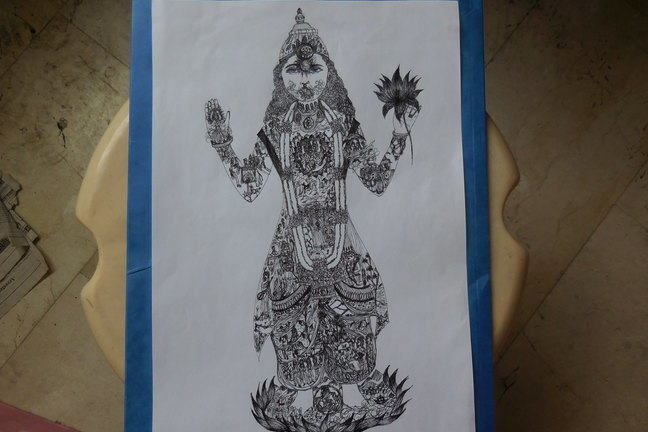 Purusha: the proto-human Hindu divinity that contains within herself everything that exists: the sun, the wind, the moon, brahmins, kings, warriors, workers...

Biological and cultural diversity for most populations in the Global South are intimately connected to Spirituality.

The life-giving fecundity of the natural world lends to the belief that the environment is an expression of spiritual realities. Leonardo Boff describes this world-view poetically in terms of how “the spirit sleeps in the stone, dreams in flowers, awakens in animals and is known to be awake among human beings.” (231) 1

This is evident in the inherent value of nature given by the Orocan Waaqa (God) in Africa (p. 53), the norm of participation in the works of the Creator in the human beings’ relationship with nature (120), the creation theologies of Latin America (231), and the religious context of Buddhist edicts about the natural world in the Asian region (165).

Purusha, India’s proto-human-god, just to take another example from Asia, embodies the sun, the earth and the animals. It also includes the different social castes: its mouth became the Brahmins, the kings were made from its arms, it’s thighs the warriors, and the workers were born from its feet. 1

In these views, there is no separation between the natural and cultural worlds. For most peoples living in the Global South, nature and culture are both manifestations of an august spirit in the world.

These spiritualities posit intrinsic values on nature and inhibit the human beings’ instrumental relationship toward their surroundings.

Take a quick survey to let us know how you feel about the connection between the natural and human-made worlds.

Please explain your answer in the comments section.

© 1 A Commentary on Purusha was contributed by Martha Kudelska of Jagiellonian University in Poland. Unfortunately her contribution was not included due to lack of space